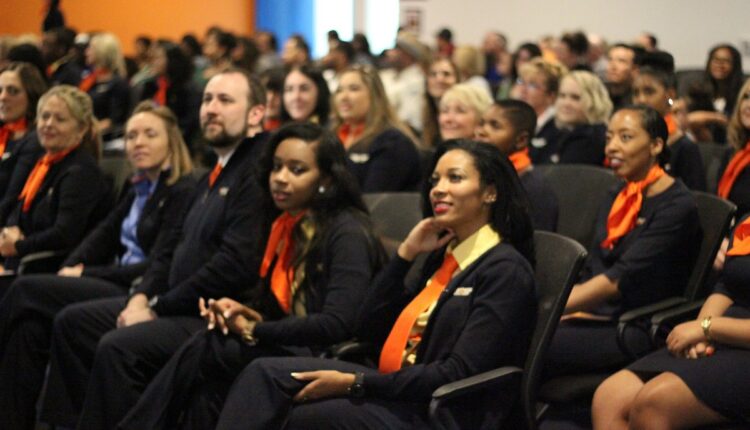 In this undated photo, Allegiant flight attendants receive training before taking to the air.

Passengers make their way up a passenger ramp to board their Allegiant Air flight at the Provo Municipal Airport on Thursday, April 16, 2020.

In this undated photo, Allegiant flight attendants receive training before taking to the air.

Passengers make their way up a passenger ramp to board their Allegiant Air flight at the Provo Municipal Airport on Thursday, April 16, 2020.

By Nov. 16, the Provo Airport will be prepped and ready to fly as the Utah home base for Allegiant Air, headquartered in Las Vegas.

In the meantime, there is much to be done including the hiring of 60 new flight attendants who will live and be based in Provo and surrounding area.

Over the next few months, Allegiant’s talent recruiters will hold several informational sessions in Provo to talk with community members about the airline and the benefits of being a flight attendant.

Training will begin in mid-September in Las Vegas, according to the airline, and accommodations will be provided.

“It is one of the most fulfilling — and fun — careers you can ever have,” said Tracy Tulle, senior vice president of flight crew operations. “Flight attendants become like their own sort of family. They get to help create an amazing experience for passengers who are going on vacation and, in return, they get benefits that allow them to travel the world.”

According to Allen Thieman, vice president of flight crew planning, people may have misconceptions about who can become a flight attendant, when the reality, he said, is that “our flight attendants have a broad range of stories and backgrounds.”

There are four attendants and four reserve attendants for each plane. By November, Provo Airport will offer 11 in-and-out destinations, meaning the flight attendants will fly out and back home each day so they can sleep in their own beds, allowing for a healthier work-life balance, the company says.

Thieman started as a flight attendant at Allegiant 16 years ago while he was attending college. He was based out of Orlando and found that after college he was making more with the airline than his career choice and enjoyed the opportunities and benefits it offered.

The initial four-week training is held at Allegiant’s Las Vegas headquarters. “Some may have apprehension,” Thieman said. “They start and end together as a class. Some of you will become best friends.”

Flight attendants are more than just glorified soda pop and peanut dispensers, Thieman said, they are safety professionals. More time is spent learning about how to make the customer safe than customer service, although that is important.

The planes based in Provo are Airbus A320s with a capacity of between 156 and 186 passengers, depending on the length.

While there are some specific requirements for flight attendants — such as that they have to be 21 or older, pass background checks, etc. — there are many benefits, according to Thieman.

Employees and their eligible dependents fly free on Allegiant and qualify for heavily discounted fares on many partner airlines worldwide, including United, Southwest, Alaska Airlines, Virgin Atlantic and Emirates, among a few.

Allegiant recently invested $95 million to open a four-aircraft base at Provo Airport that will create more than 150 jobs.

For more information on becoming a flight attendant, including how and where to apply, visit Allegiant’s career page at allegiantair.jobs/careers/flight-attendants.