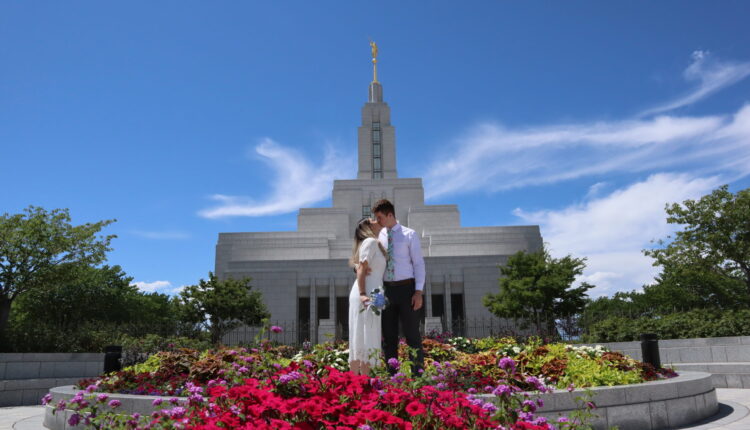 Opinion: The pressures of marriage end some relationships before they even begin

There is an overwhelming pressure and emphasis on Provo for each person to find their eternal companion. Because of this pressure, many potential relationships are ended before they can even begin. (Cassidy Wixom)

The dating circumstances in Provo are unlike any other place in the world. Thousands of young adults hoping for love, happiness and success are all huddled together within a six-kilometer radius between BYU and UVU.

With the Church of Jesus Christ of Latter-day Saints’ emphasis on everlasting marriages and families, the abundance of friends who become engaged (within three months of meeting them) and getting married almost every single day of the year, and the soon to be 10+ temples within 80 km of the city, the idea and spread of marriage is strong in the valley.

Apart from the fact that almost every single ward activity is geared towards getting to know others (especially those of the opposite sex) and there is constant talk by YSA bishops about how they met their spouse and how to get a spouse, there is pressure to get married , overwhelming.

In the last general conference, President Russell M. Nelson said: “If I were able to speak one-on-one with every young adult, I would ask you to find a companion to be with in the temple.” Discuss all the blessings that come with temple marriage.

Let’s face it, being married is a wonderful thing. Sharing your life with someone you love and having them as your best friend to support you for a lifetime sounds absolutely great to me. I fully agree that everyone should heed the prophet’s words and seek an eternal companion.

But in this pressurized provo-bubble, in which one is often only considered successful with a ring on your finger, couples get put through the doorbell, individuals’ self-esteem is cut, and potential relationships are ended before they can even begin.

From my own experience and from conversations with many of my friends, appointments in Provo…. is kind of the worst.

BYU advertising professor Tom Robinson was a former YSA bishop. When he was a bishop, he found that no one was really together anymore and people were too scared to ask out dates. He started talking by chimneys about how to take the pressure off dating because “it’s just dinner”.

He has been asked to make his dating presentation at several community fire pits and has also started a podcast entitled “It’s Just Dinner” with another BYU communications professor, Bob Walz. Robinson and Walz on their podcast discuss the “dysfunctional nature of dating in the LDS church” and how teens and YSAs can be more successful at dating.

Robinson believes that too often young adults in Church do not know how to date because they have always been taught not to go out as they grow up. Once they’re all put together in BYU and constantly being asked to date and find a spouse, they get scared because they don’t even know how to date.

Every single date seems to involve such high stakes. You tell someone that the cute boy from FHE asked you out on a date and immediately the girls in the room all say “You guys would be so cute together!” and assume it’s a done deal and you have a ring by spring.

On the flip side, when you ask someone out on a date, if you honestly just wanted to have dinner and get to know them, that person will immediately assume that you like them and want to “officially” date them.

Often times, people assume that all dates have to end on a second date, so many avoid the first date altogether. They look at the person and say, “I don’t think I could marry them because of that,” and shove off any potential before they even have a chance to get to know them.

I’ve had a lot of dates that Provo would describe as “unsuccessful” because it never became a second date or friend. But when I was on a date, hanging out with someone for a while, getting to know them better, and having a good time, how could I not call that successful?

I have several friends who are so afraid to ask someone out on a date because they don’t yet know whether they want to continue dating that person “officially”.

But isn’t that the whole point of dating? You go on dates to get to know the person. You start dating all the time to be in a relationship and see if the relationship could go on and turn into a marriage.

The whole point of a relationship is to get to know each other and get better together. However, Provo almost assumes that when you meet someone, you will almost marry someone.

The fact that dating has turned from fun to getting married is backward, Robinson said. Pushing yourself to think that every date has to have a perfect outcome because every date is someone to marry is harmful.

Forget the idea that every person you date is a potential heavenly companion, Robinson said. “Because, to be honest, they are not.” Not every person is going to be potential spouse material for you.

Instead, his philosophy for young single people is to just get out of the apartment and talk to people, go out and do something. It could be dinner, but it could also be anything simple that allows you to have fun and get to know the person. By dating young adults with no romantic or long-term intentions, they can overcome the nervousness and frightening of the date.

Robinson said dating should be about having fun, not marriage. Dating is about getting to know or befriend someone, it’s not about finding your eternal spouse over dinner one evening.

It’s like once you put the label on the relationship, everyone in the immediate area gives the green light to the question, “Is he the right one?” “Do you think you’re going to get married?” Or my favorite “Why aren’t you engaged yet? You’ve been together for two months now! “

Because this questioning and acceptance of marriage is so ingrained in Provo society, it makes many people in relationships feel like they are lagging behind in the marriage game. They feel that the relationship is going and ending nowhere because they don’t know if they want to marry someone in the second month of their relationship.

Barely blooming relationships that are just beginning to function are pushed into ultimatums and pressures from others that lead them to decide prematurely whether the relationship can be turned into marriage.

The other problem I sometimes have with the dating to marry method is that so many people in relationships focus on the future rather than being in the present. People are so concerned about seeing themselves engaged in five months’ time that they forget to work on the relationship and actively participate in the relationship they are in right now. Thinking about marriage this early can ruin your own intentions and damage potential relationships, romantic or platonic.

Of course, our goal should be to find someone we could marry at some point. But why is Provo so insistent on rushing it? Can’t we just focus on developing the current romantic and platonic relationships we are in right now instead of worrying about whether we will get married in the next year?

You will learn every single relationship you find yourself in. Whether it ends in heartbreak, mutual separation, or marriage, dating is valuable to your growth as a person. You will learn more about yourself and how to communicate, interact and connect your life with that of another. You will learn to work together towards a common goal and focus on improving yourself every day.

Nobody has to be ready to marry when they say yes to a date. I suggest Provo learn to ask others out more and less pressure on each other.

Let’s stop ending relationships before they even have a chance. Because after all, it’s just dinner.