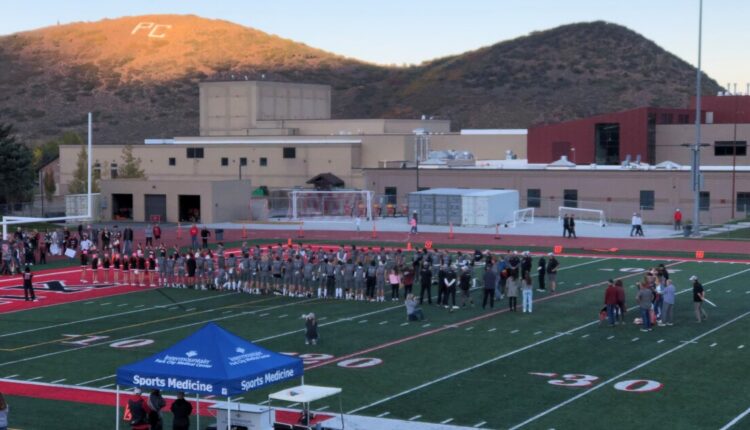 Park City finishes off regular season 7-2, while South Summit closes in on a perfect season

The Park City Miners final game of the regular season was this past Friday, as they took on the Skyline Eagles at home. The Miners looked to solidify their place in this year’s playoffs, while the Eagles were looking to improve to an above .500 record on the season.

After stalling out on the first drive of the game, the Eagles punted the ball to Carson Baynes, which resulted in a 70-yard return for a touchdown, putting the Miners up 7-0 to start the game. The Eagles and Miners traded touchdowns over the course of the first half, resulting in a 14-7 score in favor of Park City.

In the second half the Miners offense took some time to get going. However, this wasn’t a problem as the Miners defense was stout for the remainder of the game. The Miners defense only allowed one Skyline touchdown late in the fourth quarter, while Park City QB Chase Beyer rushed for his 2nd and 3rd touchdowns on the night, finishings the night with a 28-15 win over Skyline.

The Miners will finish their regular season with a well-earned 7-2 record and bye week. They will return to action on Friday, October 21st, for their first playoff game. Coverage will start at 7pm right here on KPCW.

Elsewhere in the Wasatch back, the Wasatch Wasps traveled down to Provo to face the Provo High Bulldogs for their final game of the regular season. Unfortunately for the Wasps, the Bulldogs controlled this game from the start, as they put up 28 points in the first half. Wasatch failed to match the Provo pace of play, as they could only pattern 13 points over the course of the night. The final score was 42-13, Bulldogs. With that, the Wasps will end their season with a record of 3-6.

Moving on to North Summit, the 3-5 Braves traveled to Milford to take on the 6-2 Tigers. Similar to Wasatch, the Braves could not get their offense rolling while the Tigers kept the points coming. The final score on the night was 28-13, Tigers. With that the Braves will also drop to 3-6 on the season but will look to bounce back with a win against the Duchesne Eagles next Friday.

Finally, the South Summit Wildcats took on the Judge Bulldogs for their second to last game of the season. The Wildcats, to no one’s surprise, were prolific on both sides of the ball. The offense was humming as QB Bracken Lassche threw for 3 touchdowns in the second half. The defense was also on fire, as they shut out the judge offense. The final score on the night was Judge 0, South Summit 37. With this win, the Wildcats are one win away from a perfect season. They will look to take care of business against the Providence Hall patriots next week.

Real Salt Lake Must Win Against Portland On Decision Day