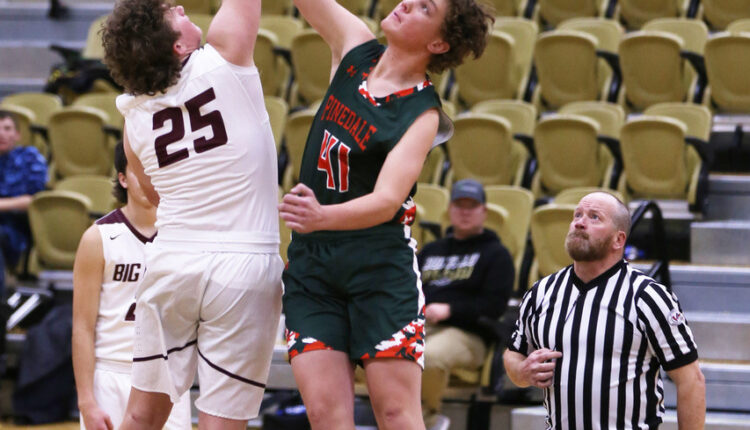 PINEDALE – The Pinedale Wranglers entered the second half in one of their opening games, four points behind Big Horn in the East-West Classic Tournament, hosted by Buffalo December 10-11.

Big Horn missed his first shot in the third quarter, the ball bouncing off Pinedale student Owen McMillen. McMillen dribbled down the court, noticing junior Michael Hosler opening to the right and passing. Hosler wound up and sunk a 3-pointer.

The Pinedale defense forced Big Horn to flip the ball on the next play. Sophomore Bridger Kaiser wedged his way through Big Horn’s defense for a layup.

Pinedale took the lead by one point.

Big Horn then sent the ball out of bounds. Sophomore Josh Gosar took possession and sped across the square. Junior Colby Bailey maneuvered under the basket. Gosar matched Bailey and Bailey met.

Kaiser caught a rebound and stormed through the Big Horn defenses for a second layup. Pinedale’s lead expanded to five points.

Despite the 9-0 run, Big Horn prevailed in the fourth quarter and won the head-to-head game 50:47.

Pinedale’s struggle to fill the gap and take the lead in the second and third quarters was a high point in a tournament played against tough, physical opponents.

The Big Horn fight followed a 79:52 loss to Rawlins on Friday afternoon.

The Wranglers finished the tournament 72-24 behind Buffalo.

Despite the results on the scoreboard, head coach Marcus Helland was satisfied with the performance of the young team.

“I was proud of how hard the kids played that weekend,” he said. “We bounced the ball back very well, but still made a lot of young mistakes. There is room for improvement at both ends of the floor. We look forward to improving this week and have another challenging weekend ahead of us playing in some big schools. “

The Outlaws dominated the first quarter, scoring 19 points and keeping Pinedale on nine. Gosar held the Wranglers with a set of threes on the scoreboard, followed by a sophomore free throw from Jayce Ramage and a jumper from Kaiser.

The half-time score was 64-33 in favor of the Outlaws.

Rawlins rolled into the third quarter and overwhelmed Pinedale with a 28-point blast.

The Wranglers regrouped in the fourth quarter and responded with 19 points, while a closer Pinedale defense kept Rawlins at 15.

Gosar led Pinedale in scoring against Rawlins with 16 points. Kaiser pocketed 13 points while McMillen and Bailey scored eight points each. Michael Hosler scored three points and Tim Hosler two. Ramage and Junior Luke Gray rounded off the scoreboard with a free throw each.

A physical, defensive first quarter ended 9-4 in the lead for the Rams.

Gosar grabbed the ball, disengaged, and landed a layup, bringing Pinedale to three points behind. A shot from close range from Gosar put Pinedale just past Big Horn.

Bailey caught a steal and raced across the course and landed a layup, Pinedale staying one point behind the rams.

The Rams pushed forward but were answered with a 3-pointer by McMillen.

Big Horn took the initiative until an outside shot from Kaiser nearly equalized the game.

The Rams took the lead at the end of the second quarter and hit the changing rooms with 28:24.

One point at a time, the last quarter ended with Big Horn winning by just three points.

The Wranglers are traveling to Rock Springs and Green River for the Flaming Gorge Classic this weekend, taking on much larger schools like Laramie and Cheyenne South.