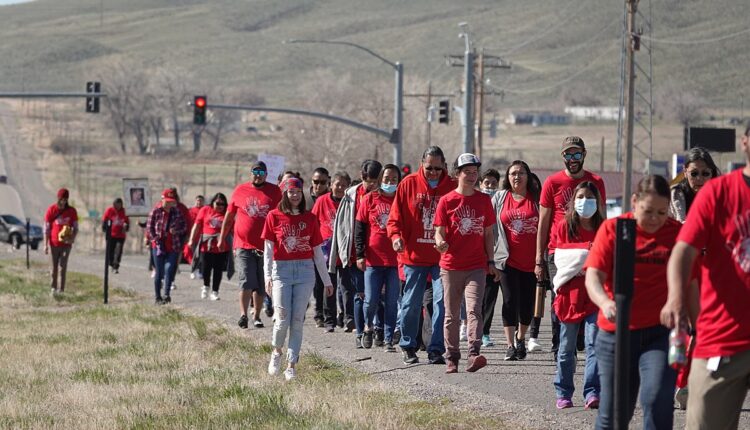 On May 5, rallies were held by members of the Northern Arapaho tribe in Wyoming in recognition of the issue of missing and murdered indigenous people.

The rallies are part of a larger effort by people in Wyoming to bring greater attention to the issues that indigenous people are dealing with, chief among them being, as a report by the University of Wyoming points out, the high rates of the murder and kidnappings for indigenous people and the lack of media coverage.

The report, published in January 2021, is part of a larger effort started by Governor Mark Gordon to try to address the issue of murders and kidnapping among Native Americans in Wyoming and to bring greater attention to it.

Emily Grant, the lead researcher for the report, said that while people in the tribal community weren’t surprised by the contents of the report, people who didn’t know now had a better understanding of what it’s like.

“It wasn’t shocking. I think everyone else outside of the tribal community was more shocked about the report,” Grant said. “Usually what we’ve heard from people in the community is that, thank you for writing this, we know this but we’ve never seen it written on paper like this. Especially when it comes to the media portrayal, there’s very few articles , the ones that there have negative character traits, they have less information in them, and that’s a fact of life…you see that all the time and you know how that feels when you’re family member is talked about that way. But this is the first time it’s been quantified, been written down, and shown in a larger audience so everyone else can see it too.”

Cara Chambers, director of the Division of Victim Services, said that while the report ran into some issues with collecting the data, the methods for collecting missing person data have since improved.

“I think there’s definitely more participating in the NIBRS [National Incident-Based Reporting System] system, I think there’s more of an understanding that we make sure we collect racial data on these crimes. I know the University of Wyoming has a wish list of things they’d like to see, but I do think there’s that general understanding. Again, the biggest thing that improved is the ability to report missing people and more of the outreach we’re doing to make sure people are reporting their loved ones missing, because that was one of the barriers we discovered, that a lot of indigenous people weren’t reporting loved ones missing because of, probably a myriad of factors.”

Chambers said that they are also planning on producing a documentary to highlight the issues, costing around $200,000, and should come out at some point in the fall, being produced by Jordon Dresser, who was recently appointed to the Joint Commission on Reducing Violent Crime Against Indians.

A Little Bit About All 23 Wyoming Counties

Hiker ‘lucky to be alive’ after slipping on ice, becoming stranded in Provo Canyon