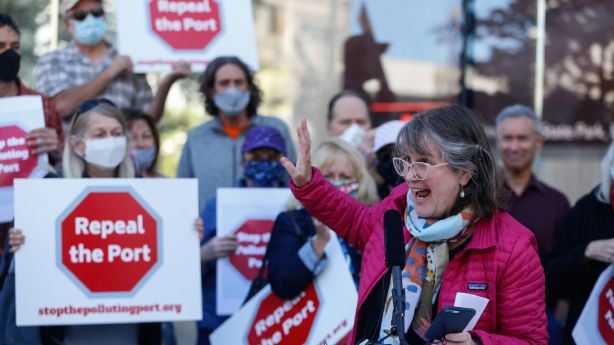 Deeda Seed, a member of the Stop the Polluting Port Coalition, reacts during a press conference outside the offices of the Utah Inland Port Authority in Salt Lake City on Monday while others hold signs against the proposed vote by the Port Authority to pass a public infrastructure district. (Shafkat Anowar, Desert News)

SALT LAKE CITY – The Utah Inland Port Authority on Monday postponed a vote on a $ 150 million bond proposal for a public infrastructure district after Salt Lake City leaders and protesters questioned the plan and its timetable.

“At that point, as Executive Director, I decided to postpone the vote to bring this (public infrastructure) discussion back to argument and not fuel the political fires,” Hedge said in a statement.

The decision to postpone the vote was made by a group of about two dozen protesters outside the agency’s headquarters in Headquarters 111 in downtown Salt Lake City. Protesters, holding signs reading “Open the port” and “SLC taxpayers do not want to pay for a polluting port,” cheered when Deeda Seed, an organizer of the Stop the Polluting Port Coalition, informed them that the meeting was taking place was canceled.

“The fight is not over yet, but I think all of you, thank you for coming, you made a difference,” she told the crowd around her.

The Utah Inland Port Authority’s plan, first published on September 8, calls for loans to fund major public infrastructure projects. At the meeting, Hedge stated that they would try to fill “existing gaps” in Utah’s import and export logistics system. These include rail improvements, a transshipment facility and a filling station for alternative energies.

But the logistics of the plan raised questions from the city guides. Salt Lake City Mayor Erin Mendenhall and Salt Lake City Council Chair Amy Fowler jointly signed a letter Thursday addressed to Hedge and Jill Flygare, chief operating officer of the Inland Port Authority, and them asked to postpone their vote on Monday until their questions could be answered.

“We have serious concerns about the speed and lack of detailed information with which the UIPA Board of Directors is being asked to approve the creation of a public infrastructure district and the issuance of up to $ 150 million in debt repaid through tax increases would normally be controlled and appropriated as property tax revenue by elected Salt Lake City officials, “the letter said.

“With no defined list of projects funded by the PGD, (Salt Lake City) is concerned about whether it will ultimately be necessary to own and maintain this infrastructure,” they added.

In a statement to KSL.com on Monday, Mendenhall said she was pleased that the Inland Port Authority agreed to postpone the vote.

“We appreciate having more time to understand the implications of this proposal and look forward to having more questions answered in the days and weeks to come,” she said.

Seed attributes the delay to a mixture of “public outrage” and the Salt Lake letter. She said she was pleasantly surprised by the delay, adding that it was the first time the Inland Port Authority “had ever responded to concerns about their plans.”

During the 25-minute protest, members of the Stop the Polluting Port Coalition spoke out against the future of the state’s inland port. They claimed it was too expensive and would only degrade the state’s air quality, which is already worrying.

“There are very legitimate questions that were not answered at all on this and it is good that they answered and are postponing the vote,” said Seed. “Although you can vote at any time. What we want to see is a full explanation of how they intend to use this money and the public doesn’t have that information, and neither does the city have that information. That has to happen to make what they intend to do more transparent. “

Meanwhile, Hedge and Flygare not only postponed a vote on the bond, they also drafted a response to Salt Lake leaders on Monday. In it, they stated that the plan “fits well with the law” and that some of the proposed projects are in fact not planned for Salt Lake City. For example, the alternative fuel facility is said to be in West Valley City.

They also made it clear that the law in force allows the inland port authority to issue public infrastructure districts as the municipalities can do. In both cases, the consent of the property owner is required.

“PID property tax also requires approval from the landowner’s taxpayer,” they wrote, adding that the Inland Port Authority’s public infrastructure districts are different because, once established, it is a “separate government entity with its own board of directors “Be.

While they did not refute the 8.5% interest rate claim, they also argued that current interest rates are the lowest in over three decades. So they wanted to speed up the timing of the loan.

“Neither SLC nor anyone can guarantee that interest rates will stay low if funding is delayed,” wrote Hedge and Flygare. “The proposed resolutions do not require the UIPA to issue bonds, but they do create a calendar runway for the potential issue of the bonds while interest rates remain at historic lows.”

The Inland Port Authority has not set a new date for the vote on the bond.

Seed said she would welcome all of the agency’s efforts to be more transparent on projects, including the proposed bond. She said the Inland Port Authority has been operating “behind closed doors” since its inception in 2018.

“When we ask for information, we don’t get it,” she said. “We want information to do a human health risk assessment, you know, that will help us understand the health implications. … I’ve been in public politics for about 30 years, this is the worst example of public politics I’ve ever seen. It is, frankly, terrible. “

She hopes Monday’s postponed vote will mark a turning point in her concerns with the agency.