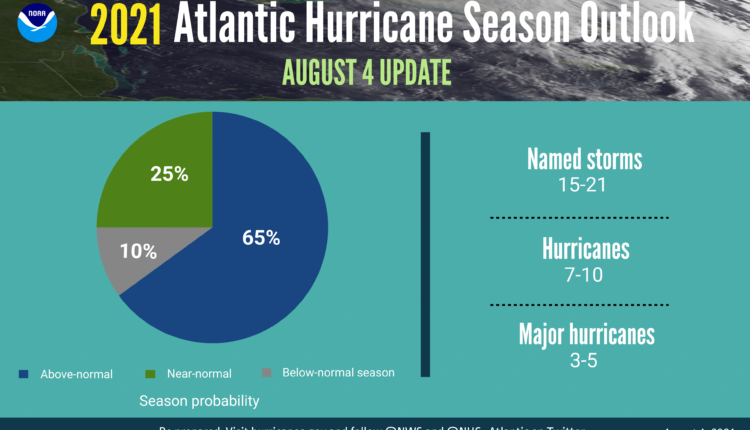 According to NOAA’s Climate Prediction Center (a division of National Weather Service), the 2021 Atlantic hurricane season has begun. Atmospheric and oceanic conditions are still favorable for a above-average hurricane season.

“After a record-setting start, the Atlantic 2021 hurricane season does not show any signs of relenting as it enters the peak months ahead,” said Rick Spinrad, Ph.D., NOAA administrator. “NOAA will continue to provide the science and services that are foundational to keeping communities prepared for any threatening storm.”

“A mix of competing oceanic and atmospheric conditions generally favor above-average activity for the remainder of the Atlantic hurricane season, including the potential return of La Nina in the months ahead,” said Matthew Rosencrans, lead seasonal hurricane forecaster at NOAA’s Climate Prediction Center.

Atlantic sea surface temperatures will not be as high as during the record-breaking 2020 season. However, lower vertical wind shear and a stronger west Africa monsoon contribute to conditions that could increase seasonal hurricane activity. These conditions are set against a backdrop of the Atlantic Multi-Decadal Oscillation’s ongoing warm phase, which favors more active hurricane seasons ever since 1995.

“Now is the time for families and communities to ensure their preparations are in place,” said National Weather Service Director Louis W. Uccellini, Ph.D. “These storms can be devastating, so be prepared for all possible outcomes by staying tuned to the forecast and following safety information and possible evacuation notifications issued by emergency officials.”

NOAA’s update to the 2021 outlook covers the entire six-month hurricane season, which ends Nov. 30. Throughout the hurricane season, NOAA’s National Hurricane Center (NHC) provides the hurricane track and intensity forecasts that emergency managers and communities rely on across areas at risk during a landfalling storm. NHC is the source for all watches and warnings for tropical storms, hurricanes, and related storm surge. The seasonal outlook from NOAA is not a landfall forecast as landfalls are typically only predictable within about a week of a storm potentially reaching a coastline.

Journalism is central to democracy. Support it.

Once a weakness in the BYU defense, cornerback has become a position of depth