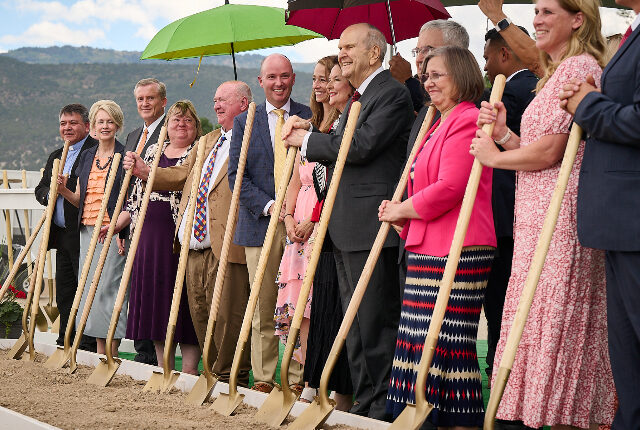 The prophet of The Church of Jesus Christ of Latter-day Saints presided at the groundbreaking of the Ephraim Utah Temple on Saturday, August 27, 2022.

“We pray that the construction of this temple may be accomplished to accommodate Thy divine purposes,” said President Russell M. Nelson in the dedicated prayer during the service in the central Utah community of Ephraim.

President Nelson continued, “We are deeply grateful for our ancestors. They have laid a foundation of faith that undergirds our spiritual strength. May we learn who they are, find their qualifying information, and bless their lives with sacred rites offered vicariously in this holy house.”

“The history of this area includes my own family,” President Nelson said at the event, which was attended by invited guests. “My dear mother was born in Ephraim, not far from this very temple site. My father was born in Manti. Three of my four grandparents were born here in Ephraim. All eight of my great-grandparents lived in Ephraim.”

The Ephraim Temple will be built on a 9.16-acre site located at the intersection of 200 North and 400 East in Ephraim, Utah. Plans call for a three-story temple of approximately 39,000 square feet.

The Ephraim Utah Temple was announced in May 2021 by President Nelson.

Ephraim has the largest population in Sanpete County and is the home of Snow College. Brigham Young first sent settlers to Sanpete County in November 1849, and they settled what is now Manti. Ephraim was first settled in 1854, primarily by pioneers who immigrated from Scandinavian countries.

President Nelson’s great-grandparents were all converts to the Church of Jesus Christ in their native countries of England, Denmark, Norway and Sweden.

President Nelson has announced 100 new temples since he became the prophet of the Church in 2018. Worldwide, the Church now has 282 total temples in operation, under construction or renovation, or announced, including 28 temples in Utah.

The Ephraim temple will be located near the Manti Utah Temple, which is currently under renovation. The Manti temple was first completed in 1888. The pioneer-era temple is expected to be rededicated sometime in 2023.

The Ephraim Utah Temple will serve more than 31,000 Latter-day Saints in Sanpete, Carbon and Emery counties. This includes Latter-day Saint students who attend nearby Snow College. An existing meeting house for young single adults will be adjacent to the temple.

Latter-day Saints consider temples the house of the Lord and the most sacred places of worship on earth. Temples differ from the Church’s meeting-houses (chapels). All are welcome to attend Sunday worship services and other weekday activities at local meetinghouses. The primary purpose of temples is for faithful members of the Church of Jesus Christ to participate in sacred ceremonies such as marriages, which unite families forever, and proxy baptisms on behalf of deceased ancestors who did not have the opportunity to be baptized while living.

What should fire up Utah, BYU and Utah State football in 2022