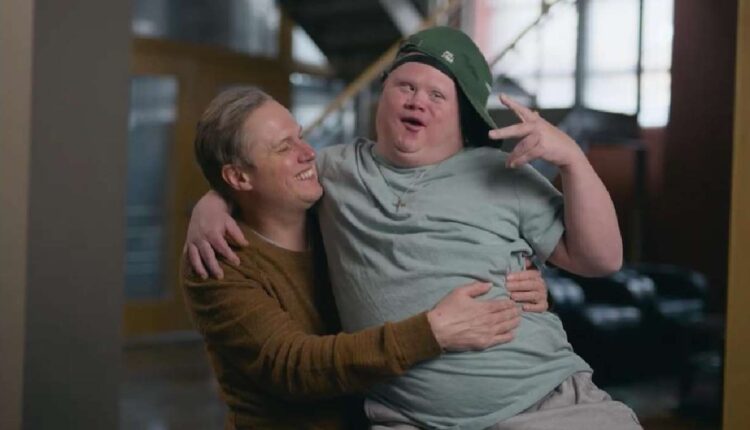 Luke Johnson is making his brother David Johnson a movie star in a buddy comedy highlighting parts of their lives. (Jeremy Prusso)

There’s a new movie star in town named David Johnson, and his slapstick comedy and impeccable comedic timing might just take the world by storm — at least that’s what his older brother says.

Not only that, but Luke Johnson is on a mission to make his younger brother a movie star because it’s what he promised a long time ago.

Johnson is a filmmaker, and his brother has Down syndrome. According to the elder brother, the two have been making films their entire lives. Recently, however, Luke Johnson, who produces films for BYU-TV, has wanted to make good on his promise to make his brother a movie star.

“As I started working my way into the film industry, David just would always ask me if he could be a part of it. He would talk about us making a movie about his life, and I promised him that I would one day and so we are finally doing it.”

Johnson said it took him years to come up with a film worthy of putting his brother in, but when he looked back on his own life with his brother, it all started to come together.

He’s been making us laugh and smile since the day he was born.

“For years, I tried to figure out what story to tell about David, and I had several failed attempts at trying to make up a story,” Johnson said. “One day I realized that the best story we can tell is just one based on our real life.”

The story and the struggle

On a family vacation to Hawaii when they were teenagers, Johnson said his brother met a girl named Naria, with whom he fell in love. Unfortunately, he lost Naria’s contact info, but he did still have her picture.

As the years went on, Johnson’s brother would tell all his friends that he was going to marry Naria, and this is where the story starts: On a road trip to find Naria.

“One day, I just realized what if we as brothers came out on a road trip to find this girl that David was in love with — that could be an amazing story,” Johnson said.

A photo of a girl David Johnson met while on a family vacation in Hawaii sits on his dresser. (Photo: Jeremy Prusso)

There is more to the story, however, and to tell it, Johnson would have to tap into some of his darkest days.

“I struggled with substance abuse for many years,” he said, holding back tears. “And, you know, I had incredible people in my life who never gave up on me and always believed in me and who knew I would pull through, and David is one of those people. I don’t even know that he had any idea of ​​what I was struggling with, but every time I saw him, he would just give me the biggest hug and it’s exactly what I needed because I needed to feel loved at a dark time in my life.”

With David’s love story and his own story of struggle, Johnson came up with what he is calling a buddy comedy he hopes will tug on viewers’ heartstrings.

‘There should be hundreds’

“David is the funniest guy you’ll ever meet,” Johnson said. “We grew up in the ’80s and ’90s, so we were raised on Chris Farley, Adam Sandler and Jim Carrey. David’s comedic timing is the greatest and everywhere he goes he makes people laugh.

“David doesn’t have the ability to memorize a full screenplay or a script, and a lot of this is going to be heavily improvised. And so I think we have a very unique opportunity to not only tell a story that is very unique, but also it’s a very true to life story of who it is…. He’s going to be playing himself.

And I realized one day that there shouldn’t just be one movie with someone with Down syndrome as the lead. There should be hundreds, right?

An online fundraising campaign has attracted more than $20,000 in donations from hundreds of supporters, but they need a lot more to make a feature-length film. Johnson said he will make the movie regardless of whether they reach their funding goal. He also said he owes it to his brother to complete the film.

“David is one of a handful of people that I feel like I owe my life to, and the very least I can do to pay him back is to help his dream come true,” Johnson said. “Now that I’m in a position where I can help tell his life story, the very least I can do for him is to come through on that promise that I made him 10 years ago, which is to make him a movie star. “

To learn more about the project, visit their GoFundMe* site.

*KSL.com does not assure that the money deposited to the account will be applied for the benefit of the persons named as beneficiaries. If you are considering a deposit to the account, you should consult your own advisors and otherwise proceed at your own risk.