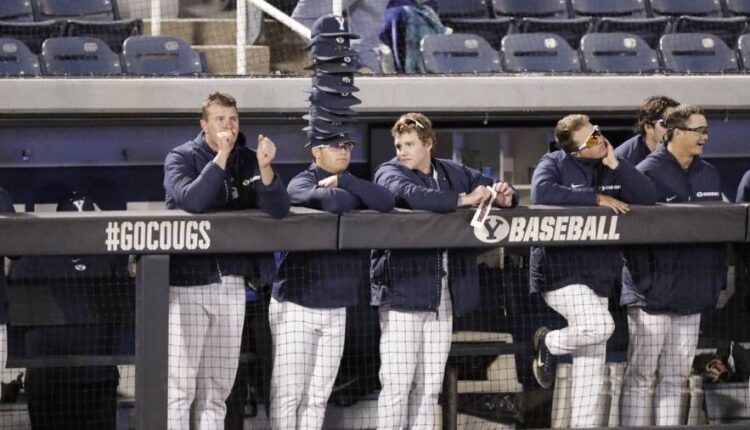 PROVO, Utah – While you were sleeping, BYU baseball put together a memorable night at Miller Park.

The streaking Cougars won their seventh straight ball game by taking down WCC rival Pacific in 12 innings, 8-7. It was the first of a three-game series between the conference foes, and it will be hard for the next two games to match the opener.

#BYU’s Jacob Rogers pinch hits a single in the bottom of the 12th inning to give #BYU an 8-7 win over Pacific.

BYU Baseball is now on a seven-game winning streak.

With the game being televised nationally on ESPNU, first-pitch didn’t occur until 8 pm local time. Then you throw the wrinkle of extra innings – BYU’s first game in extras this season – it made me for a long night. But an entertaining one for the boys in blue.

The game came to a close at around 12:30 am on Friday as UNLV transfer Jacob Rogers pinch-hit a single in the 12th inning to send in the game-winning run.

Rogers wasn’t the only star during the 12th inning. ESPNU’s broadcast kept showing BYU outfielder/left-hand pitcher Cooper Vest in the dugout throughout the final inning. Vest was sporting an epic rally cap tower that featured around 18 BYU baseball hats. The ESPNU color analyst marveled at the caps saying, “If BYU wins tonight, that guy has to be the MVP.”

This rally cap is epic from @BYUBaseball’s dugout.

More games need to go past midnight and reach the 12th inning for content like this.#BYU @kslsports pic.twitter.com/Usaq0cV0bW

Throughout the 12th inning, ESPN cameras kept cutting back to Vest at every possible opportunity.

It’s only crazy if it doesn’t work.

BYU improves to 29-18 overall and 12-10 in West Coast Conference play with the marathon win. They will return to action tonight at Miller Park against Pacific at 6 pm (MT).