Hiker ‘lucky to be alive’ after slipping on ice, becoming stranded in Provo Canyon 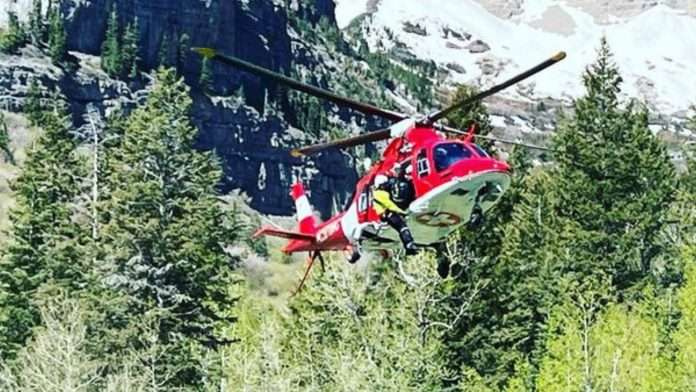 PROVO CANYON, Utah, May 22, 2022 (Gephardt Daily) — Rescue crews say a hiker who slipped on some ice and became stranded on a cliff in Provo Canyon is “lucky to be alive” after being hoisted to safety Sunday.

“Our patient was in serious danger and lucky to be alive,” the North Fork Fire Department stated in a Facebook post Sunday afternoon. “Had she fallen more, that would not have been the case.”

Officials say the hiker was “holding onto a rock” after sliding down an ice-covered scree field. She was hoisted out by an Intermountain Life Flight helicopter and treated by paramedics at the scene for hypothermia and minor injuries before being released, fire officials said.

It took about 2 1/2 hours for crews to rescue the hiker, the post states. Search and rescue crews from the Utah County Sheriff’s Office assisted in the rescue, fire officials said.

Just before 8 pm, fire officials posted about another rescue in progress involving a hiker stuck on a cliff on Mount Timpanogos.

A Utah Department of Public Safety helicopter was assisting with the rescue.

While the hikers ended up in areas they couldn’t get out of without assistance, rescue crews noted in a Facebook post that they were prepared, which “greatly benefitted” the rescue.

“They all had at least a partner or a group,” the North Fork Fire Department stated on its Facebook page. “Had these hikers been alone, it’s a great possibility they’d still be there and worse off with the dropping temperatures.”

The stranded hikers also had water and food, they were dressed appropriately, and their cellphones were charged, the post states.

When “hiking alone or in a group, keep your usage down,” the fire department states. “This is in case you need to speak with emergency officials and so they can reach you for instruction. You’re in the beautiful mountains anyway, put the cellphone away unless taking photos!”

“Mother Nature changes constantly, and although we plan for everything, we are never 110% planned out for the scenario we are handed,” the post continues. “However, we are always 110% ready and willing to provide help when needed, and in order to make our job easier in these situations, it is imperative to stay calm.

“Enjoy the miraculous spring weather we are fortunate to have! Just make sure you enjoy responsibly, and pack extra for the situation that is unknown!”

For those who hike alone, public safety officials recommend telling someone where you’ll be and when you should be back.

‘When stunt doubles marry’: How one Ogden couple set themselves on fire in holy matrimony