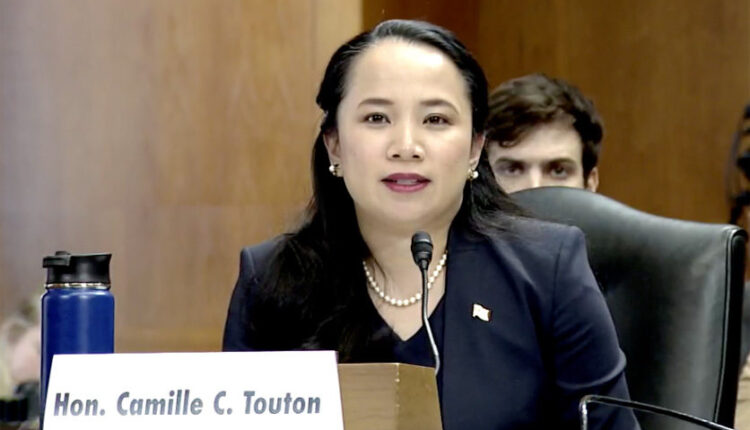 The Bureau of Reclamation is working on new steps to prevent further depletion of drought-stricken Colorado River reservoirs that are critical for agriculture and cities but shrinking to levels that can’t sustain hydropower.

With the region in a 21-year drought, Lake Powell and Lake Mead face a projected shortfall of 2 million to 4 million acre feet in 2023. For comparison, Arizona’s total annual allocation from the river is 2.8 million acre feet.

“Yes, we will protect the system,” Bureau of Reclamation Commissioner Camille Touton assured the Senate Energy and Natural Resources Committee on Tuesday. “But we’re not at that decision point yet.”

Reclamation announced two separate drought measures in May aimed at increasing Lake Powell’s storage by nearly a million acre feet through April 2023: The agency is releasing 500,000 acre feet from Flaming Gorge Reservoir, which is 455 miles upstream from Lake Powell, and leaving another 480,000 acre feet in Lake Powell by reducing releases from the Glen Canyon Dam.

Lake Mead, which lies behind the Hoover Dam, and Lake Powell are down to their lowest levels since they were initially filled. The dams generate hydropower for millions of homes and businesses in the West.

“We cannot be in the same place next year,” Touton said, trying to craft measures to ensure there is enough water in the reservoirs for power generation. “This is the priority for us between the next 60 days to figure out a plan to close that gap.”‘

Sen. Mark Kelly, D-Ariz., pressed her on whether the Biden administration is pushing Mexico to conserve water. “That’s a conversation we’re having with our partners in Mexico,” she said.

She noted that drought is a problem through much of the West. More than 70 percent of the western United States is rated in severe or extreme drought and is expected to intensify during the summer across the region.

The drought is sharpening conflicts between cities and agriculture over farmers’ irrigation water.

“I’m not suggesting the farmers stop farming, but rather that they carefully consider crop selection and make the investments needed to optimize irrigation efficiency,” he said. Most of the water diverted from the river is used for agriculture, primarily for alfalfa and other forage crops, he said. “By reducing their use of Colorado River water, agricultural entities are protecting their own interests.”

But Patrick O’Toole, a Wyoming rancher and president of the Family Farm Alliance, which represents producers across the West who rely on irrigation, told the committee that limitations on agricultural usage could push some agricultural production out of the United States. He said the solutions include increasing upstream water storage capacity and better managing forests to conserve rain water and snow.

“There is one message that’s coming from farmers: Let us do what we do,” O’Toole said. “We can’t give up our production to the Third World, which we are in the process of doing.”

He said “hundreds of thousands of acres” of farmland have been taken out of production because of endangered species and other environmental concerns.

Emphasizing the urgency of addressing the issue, he said, “We’re nibbling at a time when we have a crisis and we need to move to scale.”

Entsminger said Congress “needs to make massive investments in agricultural efficiencies. I agree with Mr. O’Toole that we need to prioritize food security, but we can’t balance the structural deficit by evacuating cities, so we’re going to need to make our ability to grow the same amount of food with less water a priority.”

Maurice Hall, vice president of climate water systems for the Environmental Defense Fund, said the West has no choice but to conserve more water in the long run.

“We do have options. but we have to manage for the rain and snow patterns that climate scientists tell us we’re in for, not for the patterns we long for. This means we have to adjust to less water use in our toolbox,” he said.

For more news, go to www.Agri-Pulse.com.