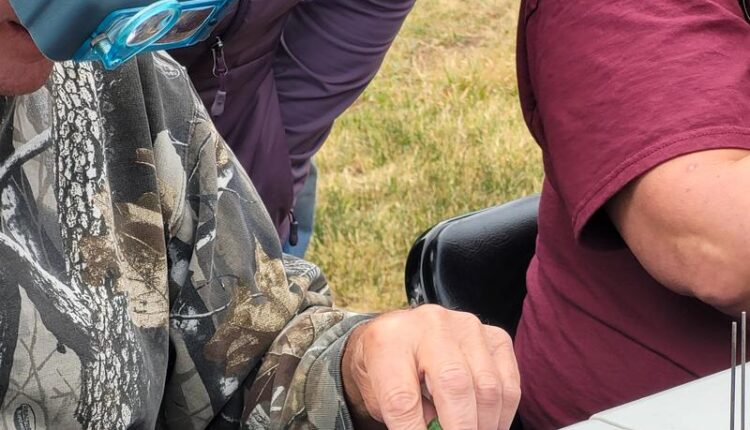 Researchers are tracking the tiny hummingbirds in Utah

Hummingbirds are tiny and lively visitors to bird feeders, but because they are so small, researchers must rely on special means to study them.

Birds can be difficult to study, especially when it comes to tracking their movements. Unlike deer and bears, which are equipped with heavy GPS collars and can be tracked via satellite, birds require smaller, lighter tracking devices. If birds are equipped with a tracker that is too large or too heavy, it can make flying difficult or even completely impossible.

In some cases, like with hummingbirds, there are no GPS trackers small enough to keep these species securely attached. Therefore, the researchers are relying on another method to track these tiny flying creatures: lightweight identification tapes.

Lisa Young and Terry Tolbert are part of the Hummingbird Monitoring Network, where they spend a lot of time catching Utah’s hummingbirds, often in front of an interested crowd, and attach numbered identification tags to their legs.

“We hang around three different stations every two weeks while hummingbirds are in the area. We are currently in the migration season. We look at different things like population size in resident birds, but also migratory individuals and some of their characteristics, ”said Young. “One of the really nice things about banding birds is when you catch someone else’s bird, or someone catches your bird, and then they document the band number that each bird gets … it when someone else gets the birds. Each band has a letter and then five numbers. “

Madison Lawrence, a previous bander on the project, explained that hummingbird bands are so small that they are not pre-made like most bird bands, but must be made on-site.

“They come in a long metal strip. And we have a couple of sizes here, and the smallest one is 5.4 millimeters. It’s pretty small. We have this chopper, and once we have these chopped up into sizes, we bring it to this clamp. I don’t know you call it … a metal clamp and you just slide it in and clamp it and then it’s basically it, ”said Lawrence.

Because hummingbirds are so small, special care is taken to ensure that the birds are not injured when they are tied.

“So I’m going to measure your leg. The most important thing is the health and safety of the birds when we collect the data we need, ”said Young. “And the pliers are specially made to match the size of the tape exactly so that the bird is not injured, it is just measured close to the correct size.”

Young said that although hummingbirds are small, the birds that banded them sometimes travel quite a distance.

“The most distant one of our reddish hummingbirds has was British Columbia and as far as Tucson in the Chiricahuas. That’s quite a wide range, ”said Young.

In addition to attaching a tape to the hummingbird’s leg, Young spends some time inspecting the bird’s feathers for wear, measuring the length of its beak, and weighing it. To my surprise, she also pulls out a drinking straw and uses it to gently blow on the hummingbird she is holding.

“So birds don’t have feathers on their belly, chest and neck,” said Young. “So I’ll see how much fat she has to see her migration status.”

She blows on the bird again, pushing its feathers aside, revealing little yellow flab that peeks through its pale pink skin, then calls out a number that tells the bird the amount of fat a volunteer can write on a data sheet.

Hummingbirds have developed a hover that allows them to hover near flowers for easy drinking from them. Young explained that they also have other adaptations, such as their long beak, which is endowed with an extra long tongue.

“Hummingbirds have really long tongues because you know that some of the flowers they drink from are tubular. To accommodate this length, her tongue actually goes over the back of her head and up the skull. So when you drink you will see your head bob as your tongue slides in and out of your skull, ”said Young.

Although hummingbirds are too small to track with more sophisticated technology, researchers like Young can still learn a wealth of information and share their enthusiasm for these fascinating and vivid birds with a simple identification tape.