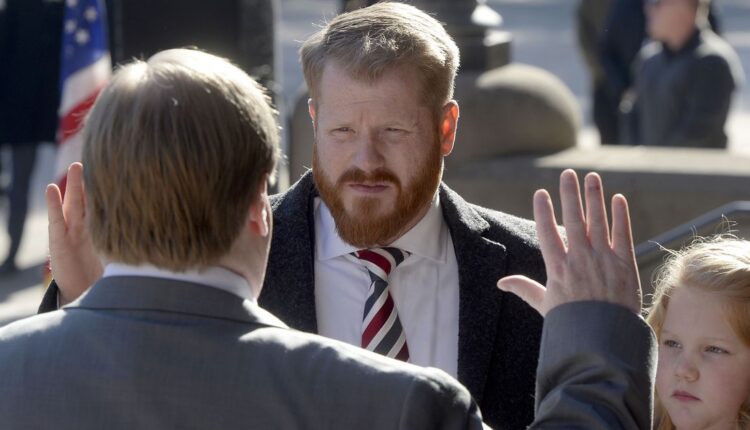 James Rogers represented District 1 on the West Side for eight years.

(Al Hartmann | The Salt Lake Tribune) City council member James Rogers takes the oath of office in this file photo in a ceremony in front of City Hall. His daughter Sadie, right. Rogers resigns from the council.

Rogers, currently vice chairman of the council, will be leaving his post effective Monday.

“I have to give my children everything I can,” he said.

He did not seek re-election. The candidates in District 1, which includes Rose Park and the northwestern part of the city, are Blake Perez, Victoria Petro-Eschler and Richard Barnes.

The remaining six council members will choose Rogers’ successor after the November election. Interested residents can submit to the town clerk between October 11th and 29th. The council will then interview applicants and select a replacement who will serve until Rogers’ term ends in early January.

Rogers encouraged those interested in giving their names, but added, “My hope is that the person who wins the election will get a jump start on their term in office.”

“He has single-handedly fought for the rights, protection and preservation of his neighborhood and community,” she said. “He’s the most thoughtful, caring, and compassionate person I know – and one of my best friends.”

Not only is Rogers stepping down from the council, Rogers is also stepping down from his position as a member of the board of directors of the Utah Inland Port Authority. He was one of two representatives from Salt Lake City. The other is Rachel Otto, Mayor Erin Mendenhall’s chief of staff.

Rogers said there are opportunities related to the controversial port project, such as creating apprenticeships for manufacturing. He is proud that the 10% of the land tax increases in the inland port go into affordable housing.

During his tenure, he also saw the construction of a new Salt Lake City International Airport and the start of construction on a new prison nearby.

He also fought to create a year-round public market at the Utah State Fair Park.

Rogers said he had “thoroughly enjoyed” his years on the council and would remain a Westside advocate.

In response to Roger’s resignation, the mayor said, “James is someone I am so happy to have worked with on important community issues, both during my time on the council and in the hallway as mayor. With passion and commitment, he worked not only for the residents of his district, but also for the people in our entire city. “