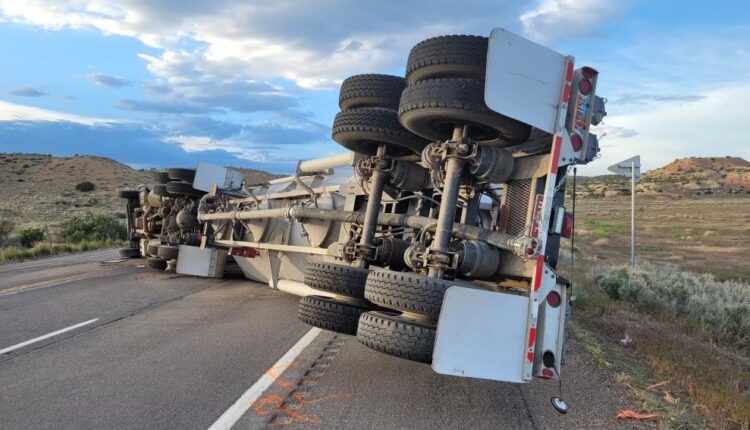 Semi rollover near Vernal blocks all lanes of US-40

A semi hauling sand Monday evening rolled on US-40 near Vernal, blocking all lanes of traffic. The driver suffered minor injuries and was transported to an area hospital in stable condition. Photo credit: Utah Highway Patrol.

UINTAH COUNTY — Lanes on US-40 near Vernal were blocked for a time Monday evening due to a semi rollover, according to the Utah Highway Patrol.

The UHP says the semi was hauling sand and it drifted off the road at 6:55 pm As the driver was correcting, the back overturned onto the passenger side, according to the UHP. It skidded roughly 300 feet near mile post 138, four miles west of Vernal.

The driver was transported to an area hospital in stable condition for treatment of minor injuries. The semi is blocking all lanes of traffic, the UHP says the highway should be closed for 90 minutes. No other vehicles were involved in the incident.

Lanes blocked on US-40 for a semi rollover near milepost 38 in Uintah County. All lanes blocked for at least 60 minutes. Minor injuries reported. pic.twitter.com/utWMx1EgQu

CASFB: Everything you need to know about food donations | News, Sports, Jobs