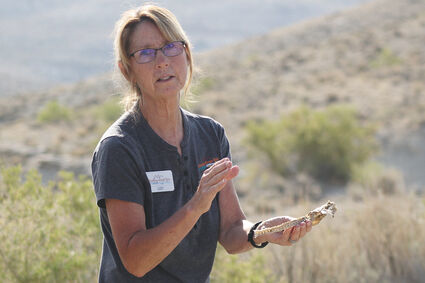 “There’s a lot of space out here to explore and get off the beaten path,” Lucy Diggins-Wold told a tour bus full of people on Friday.

A tour group got a taste of these open spaces during a tour of the Flaming Gorge area hosted by Sweetwater County Travel and Tourism. Lucy, the tour guide for the trip, hopes the taste is enough to create a connection that will make people want to come back.

The tours have been running on Thursdays and Fridays since June 3, and two more tours are pending this summer.

The journey starts light and early. Participants will meet at 7:30 a.m. at Explore Rock Springs and the Green River Visitor Center on Elk Street in Rock Springs to depart half an hour later. From there, the tour lasts for most of the day, covering approximately 160 miles before arriving back in Rock Springs at 4:30 PM

While the tour leads through the 91 mile long Flaming Gorge, participants often stop to stretch their legs, have a bite to eat, and most importantly, get to know and enjoy the beautiful landscape.

The tour stops at locations like Firehole Canyon, Flaming Gorge Dam, Red Canyon Visitor Center, Sheep Creek Geological Loop, and several scenic overlooks. Food is available all day, with donuts for breakfast, soup and sandwiches at Red Canyon Lodge for lunch, and ice cream treats at the Lucerne Marina Store in Manila for an afternoon snack. Other snacks and bottled water are available throughout the day.

During the journeys between stops, Lucy speaks into a microphone as she points out landmarks, wildlife, and fun facts about the areas the group traverses.

Tour participants learned more about the history of the area, with Lucy sharing stories about the interesting people who used to live there. Some, like Amos Hill and Cleophis Dowd, bred and trained horses for Butch Cassidy and the Wild Pile when the outlaw gang operated in the area. Amos was a hermit who lived in a shelter and carried a burlap sack and cowhide shoes. Cleophis wanted to be a priest in life but shot someone before he was ordained.

The area’s abundant wildlife was seen throughout the day. The group saw two groups of ewe bighorn sheep as well as pronghorn antelopes and a variety of birds and smaller animals. The group also learned how the landscape is good habitat for wildlife, which areas are ideal for bird watching, and details about Wyoming’s game and fish management, such as spawning Kokanee salmon and fishing for burbot in the canyon. Lucy is an expert on wildlife as she was employed by the WGFD as an information and education specialist for the Green River region prior to the tours. During the Firehole Canyon stop, the group heard from another WGFD employee about inspections for invasive water species. Lucy also shared tips on how to see more wildlife – like getting back to the area early in the morning.

The tour also includes interactive elements. Lucy encouraged everyone to call out when they saw wildlife and explained that she hated bus tours while employed by the WGFD as she always spotted a moose when it was too late for everyone else to see it. She also hosted a round of Wyoming trivia during part of the drive, asking questions like how Wyoming came to be known as an equality state, what the first city to have electricity in Wyoming, and the name of the first female jury supervisor in the US from Cheyenne. Those who gave the correct answers received a small prize.

Lucy said the tour was not meant to tell all about the Flaming Gorge as it would be an impossible task. Instead, she hopes to pique people’s interest.

“We’d like you to come back with friends and family and do some exploring,” said Lucy.

The Flaming Gorge Loop Tour is a new attraction from Sweetwater Travel and Tourism, but it has been a long work in progress.

“They’ve been trying to get this going since the early 1990s,” explained Lucy. However, she said the funds would not be available until Jenissa Meredith, executive director of Sweetwater County Travel and Tourism, applied for a grant to pay for the tours. They had hoped to get started in 2020 but the COVID-19 pandemic struck and delayed tours for a year.

According to Lucy, they’re just getting started.

“It’s so new that we’re helping to shape how it will go on,” said Lucy, explaining that the details have evolved over the summer. The tour had a largely history-oriented script, but one of the reasons Lucy was chosen to lead it was so that she could add more information about the wildlife and natural features of the landscape. Lucy complements and changes the information she shares as she learns more as she travels and sometimes learns from the tour participants.

The tours were well attended this summer, with groups between 19 and 29 people. While most of the tour participants were locals, Lucy said they had people from all over Wyoming, including residents from Buffalo, Laramie, and Cheyenne. The tour has also attracted people from neighboring states like Colorado and Utah. They also had different age groups among the tour participants, from kids to a tourist in their 90s.

Lucy hopes the tour will continue to grow and expand over the next year. She enjoys being a tour guide and meeting people who are interested in the Flaming Gorge region.

“Seriously, it sounds cheesy, but I’m human-person,” she said with a smile.

In addition to seeing the wildlife and visiting the Red Canyon, Lucy enjoys all of the stops along the route and basically everything about the tour. Lucy isn’t the only Sweetwater County Travel and Tourism person who enjoys it.

Sophie Spicer has been helping Lucy on tours all summer. She explained that she started at Sweetwater County Tourism in late May and was asked to help Lucy. She had the best time of her life and has been helping ever since.

Sophie wants to share this joy with others and hopes that after the tour people will go home and be delighted with all they have seen and the opportunity to explore more. Both she and Lucy want people to take their families outside and further increase that appreciation.

The two also pointed out that the tour is very relaxed and people don’t have to be “out” to enjoy it. It’s a full day but everything is laid back and people have the freedom to choose when to explore or just sit and rest. Plus, taking the tour means you’ll be driven to each stop along the way.

“We’ll do the driving,” said Lucy.

The tour is also a great opportunity to meet new people – Lucy and Sophie get excited when tour participants start mingling and chatting on the bus.

They hope the tour will continue to grow and develop over the next year, possibly by adding travel on the weekend. They also hope to fill the bus even more than they already have. Lucy is confident that the tour will make further changes and adjustments to appeal to even more people and be available, and she welcomes your feedback.

Lucy Diggins-Wold shows the tour group a burbot skeleton and describes the effect of different fish species on the Flaming Gorge.

“We always ask people what to do,” said Lucy.

For Lucy, the main goal of the tour is to create a connection between tourists and the Flaming Gorge area. Even if it’s something as simple as knowing where Buckboard Marina is or wanting to see the Kokanee salmon spawn, Lucy hopes it will make them return, “so that when they come back or hear about the canyon, they wants to protect it and share it with friends and family. ”

She indicated that she would like the people of Wyoming to realize what special and unique outdoor experiences can be found not far from home.

“I just want people to understand how lucky we are to be standing next to all of these things and having the opportunity to be so close together,” added Sophie.

Sophie wants people to “unleash their inner child”, learn and explore and play, “be and have a nice day off with us”.