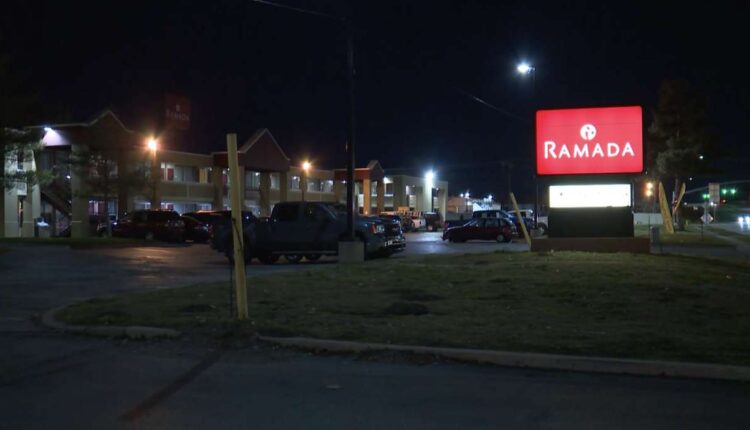 Cars parked outside the Ramada Inn in Salt Lake City Wednesday. The site was chosen as an emergency shelter for the homeless this winter. (KSL-TV)

SALT LAKE CITY – Utah capital city leaders aren’t happy that the city has been selected again to host emergency shelter during the winter.

Salt Lake City City Council, somewhat reluctantly, in a session Tuesday approved the Ramada Inn at 1659 W. North Temple as the site for a 250 bed temporary overflow that winter. Salt Lake Valley Coalition to End Homelessness officials said the temporary facility will be a “safe, uncongested, 24-hour environment” that will ensure the homeless get out of the cold conditions this winter.

Salt Lake City Mayor Erin Mendenhall said the county coalition had selected the site and asked Salt Lake City to approve the use of an emergency shelter.

While they recognized the need for shelter, what upset the mayor and several city council members was that the state was tapped into the city every three years that needed shelter after the decision to close The Road Home.

“I am frustrated with the disproportionate and largely unsupported efforts Salt Lake City is making to address the nationwide homelessness crisis,” Mendenhall said shortly before the council’s vote on Tuesday. “My frustration seems to coincide with that of the city council, where today’s discussion reflected a dwindling willingness to continually host the vast majority of services in this county without the financial support that went with that service.”

This winter’s shelter will be the second in a row that ends on the west side of the city, an area that Salt Lake City Councilor Ana Valdemoros describes as the “already stressed part of the city.” She said the police and fire brigade requested more manpower and extra overtime, and apologized for not being able to respond to every call.

Valdemoros argued that a recent report stating that sheltering for the homeless is not possible in other Utah cities and in unincorporated areas of the county is an example of Salt Lake City being “cornered” and shamed if no emergency is opened protection.

Salt Lake City Councilor Victoria Petro-Eschler, who was sworn in last week and represents the area where the shelter will be built, agreed. She added that she was concerned about issues that could arise for residents and small businesses near the shelter.

“Asking the city once to carry this burden is an emergency. Having been asked several times now, with the west side heavily targeted, is a pattern,” said Petro-Eschler. “This pattern should disqualify this type of request in an emergency. Instead, it is a seasonal request.”

The additional resources needed for the shelter are why Salt Lake City Councilor Darin Mano believes the state should cover the city’s costs.

There were also concerns about the property designated for the shelter that was raised during the meeting. Fairpark Community Council chairman Nigel Swaby said he toured the site earlier in the day and said it was “in poor condition”. He said he saw fixtures and floors being removed in some rooms; some had toilets on the beds.

“It will cost a lot more money and time to get this building back on code than the time it will take to get apartments ready in this year’s overflow,” he said.

“This motel is shabby and I’m very worried,” said Puy. “I don’t know who’s going to pay for the repairs and code building, but it’s very, very worrying – the condition.”

Ultimately, I don’t think that as a group of Elected People we might freeze to death on the streets of our city.

Even if city guides and residents were not satisfied with the position they were placed in, they also know that time is of the essence. Salt Lake City temperatures dropped below freezing overnight; The National Weather Service recorded the coldest temperatures in the city since late March. It’s a reminder that winter is just around the corner.

At the same time, the existing permanent accommodations in Salt Lake County are already filling up. Andrew Johnston, the city’s homeless policy and outreach director, told the city council during a working session early Tuesday that the use of homeless shelters is “quite high”, at 97% across the board.

Mendenhall recently took a six-month hiatus from creating new permanent housing in the city, reiterating Tuesday that the city in the state “hosts far more than its fair share of homeless services.” She added, however, that she “purposely” opened an avenue for temporary overflow facilities, believing residents would rather have temporary shelter in their city than homeless people “have nowhere to go to freeze on our streets”.

This sentiment led five of the seven councilors to vote for the shelter. Salt Lake City Councilor Chris Wharton said voting was “difficult”. On the one hand, the city faces an additional burden that could exacerbate the problems on its west side; On the other hand, many homeless people can find themselves in a “life or death situation” if the state does not have emergency shelter for the winter.

“Ultimately, I don’t think we as a group of Elected People can potentially freeze to death on the streets of our city,” Wharton said. “It’s a national epidemic, but … Salt Lake City comes up and does so every year because our residents appreciate and understand that this is a crisis that we must at least do our part and try to protect.”

The Salt Lake Valley Coalition to End Homelessness said the new space will have “on-site 24/7 security, shuttles to transport customers, meals, and connections to other services.” It is said that 300 available overflow beds will be available by April 2022.

That number includes motel coupons in other cities and mats at the St. Vincent de Paul Dining Hall and Weigand Homeless Resource Center.

“We know there are many stakeholders involved in developing these solutions and we strive to be good partners to ensure that we work with the surrounding community to consistently care for people affected by homelessness,” wrote the Coalition in a statement. “We know that the neighborhoods in the area have seen many stresses over the years and look forward to working with the community as we serve our most vulnerable residents this winter.”

Meanwhile, Mendenhall claims that more needs to be done in the future so that Salt Lake City does not have to cover the cost of emergency housing on its own. She said beds for homeless shelters need to be redistributed to other cities in the county, and Salt Lake City needs to receive “adequate” government funding for public safety costs related to housing that would otherwise fall on the city’s taxpayers.

Although frustrated by the process, the mayoress said she still welcomed the city council’s vote given the circumstances.

“This action will save lives,” she said. “But I know we all agree that Salt Lake City residents and businesses deserve a more balanced way forward.”