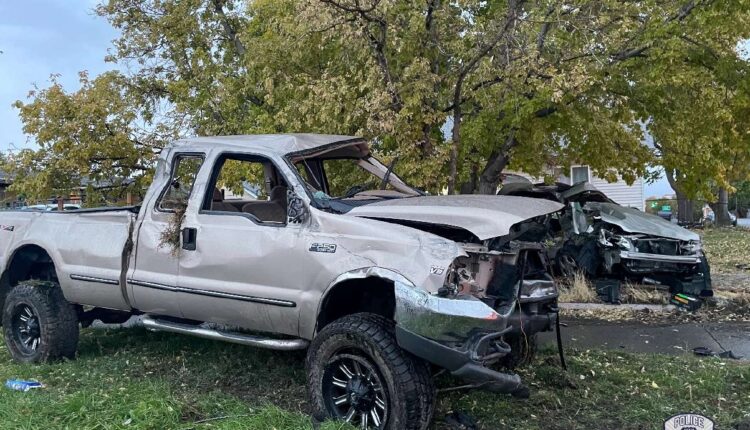 Police say one person is in custody and one person is still on the run after fleeing the scene of a crash on Wednesday. (Salt Lake City Police Department)

SALT LAKE CITY — A woman was hospitalized after a stolen truck ran a red light and collided with another car on Wednesday evening, police said.

Salt Lake City police said an officer saw a tan Ford pickup near 500 South and 1000 West around 5 pm, and after running the license plate, realized the truck had been stolen.

Police said the officer did not chase or follow the pickup, but said the driver of the truck then drove north on 1000 West at a high rate of speed and crashed into the passenger side of an eastbound car on 400 South after running a red light. As the crash happened, an SLCPD vehicle was patrolling 400 South and had to swerve to avoid a head-on collision with the other two vehicles.

The patrol vehicle clipped the back of the stolen truck, according to police.

Police said the driver and only occupant of the car was taken to the hospital in critical condition, but said doctors have since upgraded her condition and she is expected to survive. No officers were hurt, according to the police department.

After the crash, the officers said they saw two males get out of the truck and flee the scene. Police have one of them in custody, the other is still on the run. They are still investigating whether the person in custody is the driver of the pickup or the passenger.

Investigators haven’t identified anyone involved in the crash, and more information was not made available.

Littering incident in Provo ends in assault on police officers