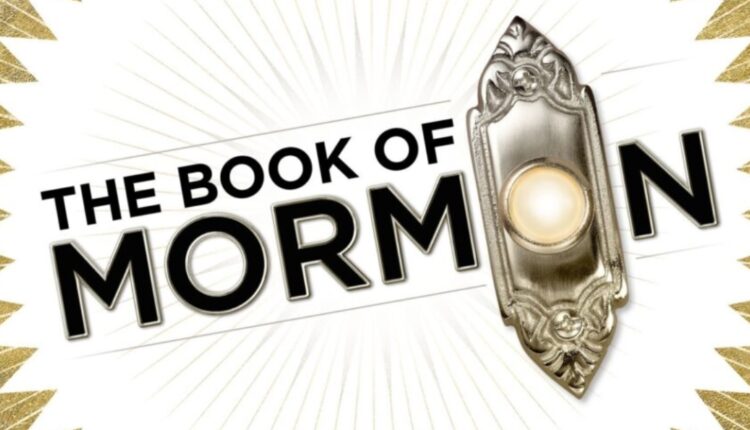 Trey Parker, Robert Lopez and Matt Stone’s The Book of Mormon took Broadway by storm in 2011, garnering an astonishing fourteen Tony nominations and taking home nine, including Best Musical, Best Book of a Musical and Best Original Score for the triumphant trio, who redefined what it meant to be a triple threat on Broadway. Fast-forward to 2022 and its satirical take on all things religious is still just as funny but in this era of rampant (and militant) fundamentalism it can’t help but be sobering as well. Holding court at San Jose’s Center for the Performing Arts now through November 27, this is a must-see show if there ever was one.

Let’s start with the stats. It was written by the satirical dynamic duo of Trey Parker and Matt Stone of South Park fame along with writer Robert Lopez, who won the Tony for Best Original Score for Avenue Q (which some have called the rate-R version of Sesame Street for grown oops). So, you’re talking some heavy-weight audacious, pugnacious paragons of parody with rapier wits. A musical about Mormons. What’s so fearsome about that? Only the end of organized religion as we know it. Okay, maybe not quite that, but clearly, behind the lampooning, biting humor and the eminently hummable tunes, the Book of Mormon is, at its heart, really a call for religion to be brought back down to earth in the service of humanity.

Yes, it skewers Mormons (and white privilege), but the send-up is done in such a goofy and yes, loving way, that you can’t help but laugh, even if it might be at your own expense. Oh yeah, yours, because even though the focus is on Mormons, it’s really about all religions that believe their texts are literally true. Stone has called the show an “atheist love letter to religion” and I think that might be spot on, but more on that later.

Broadway aficionados will quickly catch on that ‘Mormon’ is also an homage as well as a spoof of all things Broadway. With references to Wicked, Lion King and the Sound of Music just to name a few – and with an almost apostolic adherence to the traditional musical format, ‘Mormon’ has got it all.

The show begins at the Latter-day Saint version of boot-camp in Provo, Utah where handsome missionary-in-training Elder Kevin Price (the gloriously buttoned up Sam McLellan) is preparing for his two-year mission assignment, which he is certain will be spent in Orlando, Florida. He knows he’s an awesome Mormon and hasn’t a doubt that Heavenly Father will give him the gig of his dreams. What a shock then, when he finds out that he’s being sent to Uganda – and that he’s been paired with nerdy elder companion named Arnold Cunningham (the wonderfully bumbling Sam Nackman). Arnold, for his part, is over-the-moon about playing second-string to the great and powerful Price.

So away they go – two white guys in ties off to baptize the unwashed masses in Uganda and save their souls for Jesus. Armed only with the Book of Mormon — that all-American sequel to the Bible that prophet Joseph Smith copied down from heaven-sent golden plates in the 1840s in upstate New York — the boys are determined to make the other Elders proud.

Elders Price and Cunningham awkwardly navigate their new relationship as Mormon companions. Full of verve and proselytizing potential, McLellan’s Price sings a thinly veiled tribute to himself in the duet “You and Me (but Mostly Me),” while his sidekick Cunningham interjects when he can, thrilled to be second mate and the side dish, if ye will, to Price’s place as the main course on the table of Mormon life.

Scott Pask won a well-earned Tony for his scenic design, taking the boys from pristine Provo, Utah to the underbelly of Uganda in a New York minute. He transforms the stage over and over (his Spooky Mormon Hell is a sight to behold) but keeps the polished proscenium intact throughout the show. An alabaster white architectural approximation of contemporary Mormon temples (think space ship to the stars) the structure is graced with a gleaming golden statue of the Mormon angel Moroni that spins and twirls at pivotal points in the show.

The mission-bound boys arrive in Uganda and are immediately robbed at gunpoint by soldiers of the local warlord (the not-to-be-messed-with Dewight Braxton Jr.). Shaken, the Elders make their way to the war-torn village that they’ve been assigned to and quickly realize that their sunny-side-up training has left them ill-prepared to deal with AIDS-ravaged Africans who are also dealing with dysentery and poverty and have the superstitious belief that having sex with virgins (including babies) can cure AIDS. Add to that the aforementioned warlord who believes that the clitoris is an abomination and aims to rid his world of them and you’ve got a really fd-up situation. It’s also outrageously funny. Really.

Berlande simply shines as Nabulungi, the daughter of the village elder (played wonderfully by Lamont Joel Whitaker). She’s heard it all before and the Mormon brand of salvation is definitely not for her. But after one of the villagers is shot dead for defending his wife to the warlord, Nabulungi seizes on the Elders as the village’s one-way ticket to paradise.

In a heart-wrenching and poignantly humorous song, Nabulungi’s plaintive voice rings out, extolling the virtues of Sal Tlay Ka Siti, Ootah (Salt Lake City, Utah). “Sal Tlay Ka Siti, the most perfect place on Earth/Where flies don’t bite your eyeballs and human life has worth….And I hope that when I get there, I’ll be able to fit in… ./I’m on my way…soon life won’t be so shitty/Now salvation has a name; Sal Tlay Ka Siti.” Her determination and leadership is accepted by the villagers and soon everyone gets baptized. (But we were left wondering just how accepted she and the other Africans would be in “Ootah.”)

Choreographer Casey Nicholaw, who also co-directed (winning the Tony for his direction alongside Trey Parker), is at the top of his game with wonderfully inspired dancing that juxtaposes squeaky clean, wholesome Mormon movements with the tribal dance of the Ugandan villagers.

Remember that Matt Stone called The Book of Mormon an “atheist love letter to religion” but make no mistake – it’s also a ringing condemnation of religion’s tendency to literalize their particular stories and focus on the afterlife instead of this life and the alleviation of human suffering .

Robert Lopez adds elsewhere that the show is about “regaining your faith once you realize that all religious stories might not be the truth.” If all religions were more down to earth then this world would be a better place.

Go tomorrow or any other latter day to see The Book of Mormon.