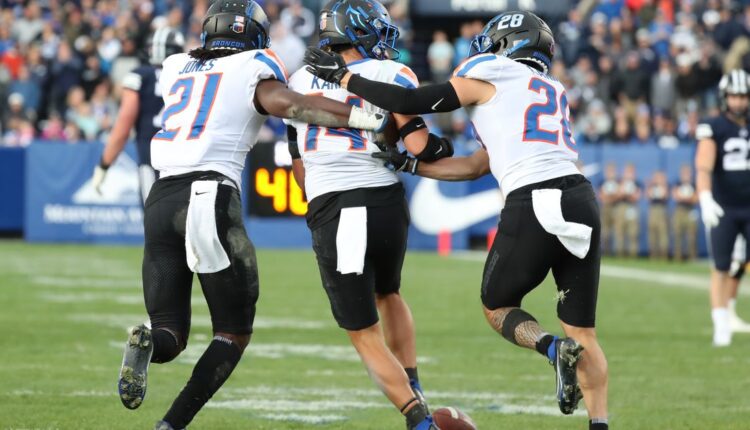 In an absolute shock, an injured Boise State team went into Provo, defeating the # 10 BYU Cougars 26-17. The Broncos were without seven starters and lost three more during the game. This could be a decisive victory for Andy Avalos and his staff. Let’s take a look at each unit’s performance and their contribution to Boise State victory.

The offense wasn’t electric, but they did their job. The offensive line picked a great game to get their best performance of the year. The Broncos were able to develop a consistent running game even without George Holani. Backup Cyrus Habibi-Likio was injured in the second half.

The Cougar defense focused on curbing the Bronco’s passing attack, keeping star wide receiver Khalil Shakir in check for much of the game. But a phenomenal catch in the fourth quarter resulted in a game-defining field goal. There is still a lot of room for growth in this unit but if the offensive can build on this performance this team will be hard to beat.

It looked like it was going to be a long night after the defense quickly gave up ten points and nearly 150 yards in the first quarter. But when it began to rain in Provo, the course of the game changed too. The Bronco defense took hold and showed a phenomenal performance, especially in the red. Three forced ball losses turned out to be the difference in the game.

Boise State was left without both starting cornerbacks and lost their lead tackler, JL Skinner, towards the end of the first half to a targeting call. The Broncos also lost backup cornerback Damon Cole in the first quarter. Boise State had all the excuses for losing this game, but they got away with the kind of performance that has defined Bronco football for the past 25 years.

What did you notice about Boise State’s performance? Leave your thoughts in the comments below.

Drop in Utah COVID-19 cases stalls. What that means for hospitals