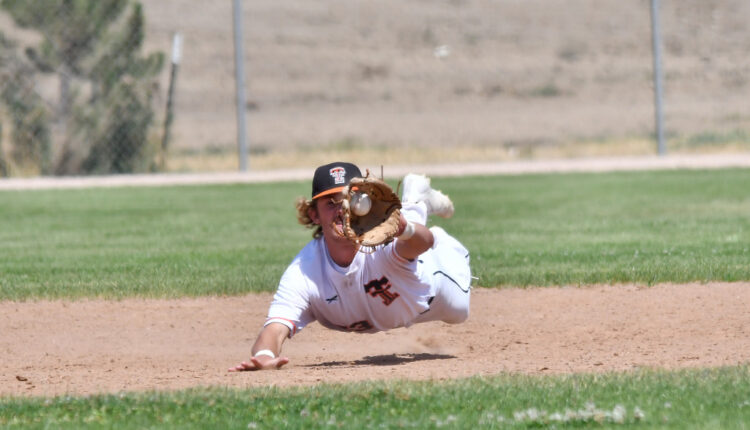 DOUGLAS – It was one last chance for four members of the Torrington Tiger ‘A’ to put on the baseball uniform this summer.

Aidyn Saucedo, Ayden Desmond, Ben Firminhac and Bryce Hager were ‘A’ East All-Conference selections for the Tigers, and as a result, got to take part in the second annual Legion ‘A’ All-Star Game hosted by the Douglas Cats .

All four of the Tigers contributed to the 9-2 East victory on Saturday afternoon at Nida Field.

All teams from around the state of Wyoming were represented, minus Cody and Casper, who were in Vernal, Utah playing in the ‘A’ Northwest Regional Tournament.

Saucedo, in his final game as a Tiger, went 0-for-1 with a walk and a run scored.

With a 4-2 lead heading into the top of the ninth inning, Saucedo led off the frame with a walk, sparking a five-run inning as the East pulled away from the West for the win.

“It was disappointing I didn’t end it with a hit, but at least I got on,” Saucedo said.

He eventually came around to score on a wild pitch to make the score 5-2.

For Hager, it was about coming out and having some fun.

“I came into this expecting to have fun, and we had fun,” Hager said. “A lot of kids got to play, and we were switching around going through the lineups.”

Hager went 1-for-2 at the plate. His hit came in the ninth, and Hager drove in a run with the single to push the lead to 6-2.

“It was a Texas league over the short stop,” Hager said. “Nothing fantasy, but it’ll work.”

Hager also made a diving catch at short stop in the bottom of the seventh inning with a pair of West runners on base.

“I got stuck in my cleats,” Hager said. “I was like I’m going to have to dive for it. The kid on second jumped out a little too far and got him too.”

Desmond also tallied a single in the inning. He was 1-for-1 at the plate with a walk in the fourth inning.

“I saw the ball alright for the few pitches I got to see,” Desmond said. “It was timely hitting, and I was lucky enough to score both times.”

He also got to pitch the eighth inning. He tallied a strike out and forced a groundout and flyout after allowing the West to load the bases in the inning.

“It was fun to pitch at the end of the game when it was close,” Desmond said. “I gave them some hope, loading the bases, but I was able to get out of the jam. It was fun playing with these guys, knowing that I had no one else from my team on the field at the time.”

Meanwhile, Firminhac went 1-for-2 at the dish with a single in the sixth inning in his second appearance in the all-star game.

“It’s really fun. It’s even better now that I know what I’m getting myself into. I was looking forward to it and was even better prepared for it this year,” Firminhac said.

Defensively, Firminhac helped started a double play to get the East team out of the fifth inning after the West looked to cut into the East’s 4-2 lead.

The four Tigers enjoyed the experience of playing alongside some of the best players in the state.

“It was weird,” Saucedo said. “We had a lot of rivalries in the dugout. We got past them and got the W.”

“It was a lot of fun playing with these kids. Playing against them, you get to know them a little bit and get a little bit of a rivalry with them, but then you come together for a couple days and fun to play with these guys,” Desmond added. “It was fun playing with Cam Spence. He hit behind me in the lineup and got me around to score a couple times. It was just a great experience.”

At the same time, they enjoyed getting to play with each other one more time.