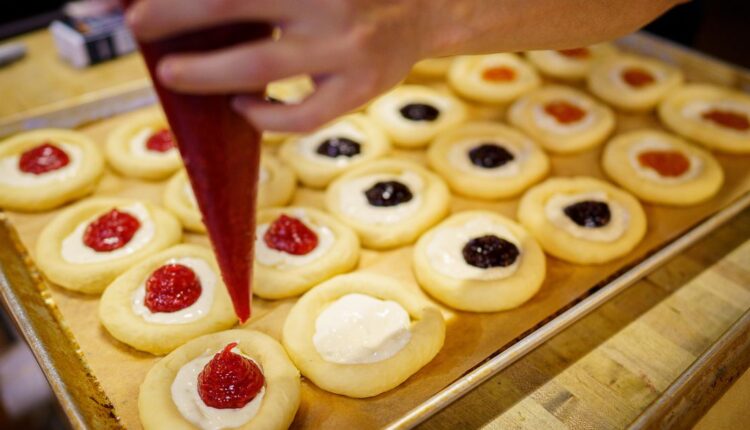 These siblings brought a Czech breakfast pastry to Utah

Editor’s Note • This article is part of 150 Things To Do, a reporting project and newsletter that explores the best that Utah has to offer. Click here to sign up for 150 Things’ weekly newsletter.

The baker from Bountiful said he arrives at Hruska’s Kolaches in West Jordan at 5 a.m. every day, although sometimes he is there at 3:30 a.m. or 4 a.m.

There he helps mix and knead bread dough, divide it into individual pieces of pastry and fill each one with various sweet and savory fillings. In Provo, Sugar House and American Fork, the bakers at the other three Hruska’s Kolaches locations do the same.

When each location opens at 6:30 a.m., their display cases are filled with dozens of golden brown breakfast pastries teeming with mixed fruit (like raspberry, blueberry, or peach) or meat, cheese, and vegetables (like bacon, egg, and cheese); Sausage and sauce; or the ranchero with eggs, peppers and onions). They bake and sell Monday through Saturday until noon.

Poss said he attended cooking school at Salt Lake Community College and then worked in various kitchens, including the Grand America Hotel.

He came to Hruska during the COVID-19 pandemic just to stay until he found another job, but said he enjoyed his new gig more than he thought.

And one of the best parts of his job, Poss said, is the early hours of the morning.

“Hruska’s has become a kind of haven for me, where I use my passion for food and also have time for everything else in my life,” he said.

5 a.m. is a late start by food industry standards, said Cory Hruska, co-owner of Hruska Kolaches, but it’s one of the reasons people enjoy working for his company.

“We had people who gave up 55 hour week jobs who paid more to work for us because [this job] gives you a life, ”he said.

It’s not just Hruska’s employees who love his business. Go to any Hruska’s Kolaches location and there’s a good chance the queue will hit the door, especially on Fridays and Saturdays when each store offers a changing menu of unique Kolache flavors only on weekends.

Famed restaurateur Guy Fieri is also a fan. Hruskas Kolaches was featured on Fieri’s Food Network show “Diners, Drive-Ins and Dives” in a 2019 episode called Handy Helpings, in which Fieri features the raspberry -Cream cheese kolache (“it is delicious”) and the sausage sauce kolache (“it is tender, it is moist, it has a lot of depth of taste”).

Hruska said he and his staff were very proud of the food they prepared. He added that what they do is a real profession.

“These people who come to us and work for us have a real passion for what they do,” he said. “They love it and they are there to serve you all.”

Hruska said he and his co-owner siblings are from Texas and grew up with their grandmother’s Kolaches.

A traditional Kolache, he explained, is a semi-sweet Eastern European party and breakfast pastry, similar to donuts.

He said the Americanized version of Kolaches is not topped with fruit and other sweet toppings, but is filled with savory fillings.

Poss said Kolaches became famous in Texas when Czech immigrants settled there. It was in Texas that kolaches evolved into savory fillings, he said.

For their Kolaches, Hruska said that he and his siblings made their grandmother’s bread dough recipe a little sweeter. Her family has “heavy Czech ancestors,” he added.

He doesn’t like to say, however, that their businesses have an Americanized approach to their Kolaches. “We’re taking our approach,” said Hruska, adding that they have been criticized for not being Czech enough as well as for not being Texan enough. “We decided on our way from the start.”

In addition, Ross has “a passion for food” and has been a chef in a number of restaurants, Hruska said.

Together with the three of them, they had what it takes to be a successful business, said Hruska, although it was Ross who really “led” the idea of ​​running a Kolache store.

Their first location opened in Provo in April 2014, Hruska said when they were all still full-time students graduating.

They initially struggled during the COVID-19 pandemic, Hruska said, but were able to keep everyone employed through government support and through him and his sibling cuts.

Hruska said that they bake in small quantities and that everything is “super fresh”.

A batch of Kolaches takes about an hour and a half from start to finish, he added.

Hruska also said they have a “core menu,” which means flavors they always bake like raspberry cream cheese or bacon, egg and cheese.

But with the changing weekend menus, your chefs get “really creative” when it comes to creating new flavors. Every location has trained cooks, he said; One of their managers has worked in France, Spain, Germany and South America while another employee has a special flair for Italian food.

Poss said he was especially proud of the Cubano Kolache and the Meatball Sub Kolache that he created.

“You don’t have to follow any rules,” said Hruska. “Let it taste good. Have fun, express yourself. “

Hruska said he and his siblings employ 30 to 35 people in all four locations. As owners, you are “deep in your elbow” in day-to-day business.

“We work with [our employees] every day, ”he said.

The amount of Kolaches made and sold per day fluctuates up and down – for example, they might sell three times the Kolaches on a Saturday that they would sell on a Tuesday – but Hruska estimated they were selling an average of around 1,000 Kolaches a day.

He also said that it is a common misconception that they close when they sell out, but they have learned how to deal with the demand. Even if a certain flavor may be sold out, “there will always be something to enjoy” until they close at noon.

All remaining Kolachians, said Hruska, go to the employees or to surrounding companies. They would like to donate leftovers to charities, but the laws on how fresh food can be donated are strict, he added.

Hruska said Kolaches became popular in Utah because he and his siblings created that niche for themselves.

They are also “really proud of the way we treat our people,” he said. “[We’re] not only a safe place for workers, but also a safe place for customers to come in and just eat and not feel despised. “

Hruska recommended newcomers to his shops to try the two most popular flavors: the bacon, egg and cheese kolache and the raspberry kolache.

He said his personal favorite, however, is the plain cream cheese colache because that’s the flavor he grew up with.

Aside from enjoying the many variations, Poss added that Kolaches helped him find a deeper love for cooking.

“The meaning that Kolaches have for me is how plain and simple [they] are, ”he said. “And [they’re] just so quick and easy. “

Editor’s Note • 150 Things To Do is a reporting project and weekly newsletter made possible with the generous support of the Utah Office of Tourism. Sign up for the 150 Things newsletter here.