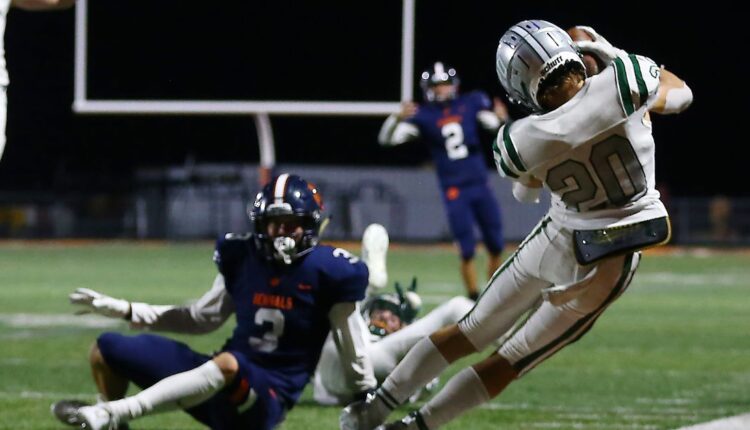 Each week, Deseret News gathers high school football stats from across the state, with approximately 85% of coaches submitting their offensive and defensive stats.

Here’s a look back at some of the headlining appearances from Week 5 (you can also check out Deseret News’ full sortable leader feature for offense, defense, and special teams).

Maddux Madsen, American Fork – Completed 28 of 37 passes for 351 yards and five touchdowns as the Cavemen dominated Bingham for the 41-13 win.

Jayce Jones, Weber – Shot two field goals, including a game-winning 50-yarder, when time ran out when Weber rallied past Syracuse to claim victory in Region 34-32.

Dominic Thornton, Kearns – Played a huge role in leading Kearns to a 37:30 win over Herriman as he defensively recorded seven tackles and returned an interception for a touchdown. He also rushed for 29 yards with three carries.

Garrett Gifford, Layton – Happened for 393 yards and two touchdowns as Layton improved to 4-1 with an impressive 24-21 win over Fremont.

Josh Peterson, Olympus – Was everywhere in the lead of Olympus to win 35-28 against Brighton when he scored a blistering touchdown and then also led the Titans defensively with 11 tackles and one interception.

Koy Dixon, Bonneville – Had a sensational game leading Bonneville to a 56-26 win over Viewmont, which beat the Vikings 28-0 in the fourth quarter. He finished the game with 16 of 22 passes for 234 yards and four touchdowns, and also stormed for 103 yards and two more scores.

Josh Speirs, Uintah – Fitted for 332 yards and four touchdowns, then scored the game-winning field goal in overtime as Uintah beat Mountain View for their second win of the season.

Quezon Villa, Wasatch – He completed 21 of 43 passes for 329 yards and four touchdowns, and then stormed to yet another score as he helped Wasatch score 41 unanswered points for the 41-12 win over Salem Hills after hitting 12th in the first quarter -0 lag behind.

Jamarcus Smith, Jordan – Carried the ball 30 times for 222 yards and a touchdown when the ‘Diggers pulled away from Cottonwood for a 31-14 win in the second half.

Matthew Mason, Logan – Carried the ball 24 times for 133 yards and two touchdowns, then added 10 tackles defensively to lead the Grizzlies to a 27-7 win over Mountain Crest.

Benjamin Ellis, Cedar City – Collected 10 tackles to take the lead defensively in Cedars’ 35:14 win over Hurricane, then aggressively did the job with 12 carries for 133 yards and two touchdowns.

Corbin Cuff, Crimson Cliffs – Raised himself up on defense and specialty teams to lead the Mustangs to a 20-7 win over Snow Canyon. On defense, he recorded seven tackles and a 65 yard pick six and then blocked a punt on special teams that was returned for another TD.

Dallas Larson, Juan Diego – Carried the ball 20 times for 262 yards and two touchdowns to highlight a dominant performance by the Soaring Eagle in the 43-22 win over East.

Boone Lathem, Union – He completed 24 of 33 passes for 245 yards and three touchdowns, and he also rushed to two touchdowns to lead the Cougars to a 38-6 win over Carbon.

Nick Despain, Morgan – Fitted for 232 yards and three touchdowns as Morgan rolled past Manti to take the 42-0 win.

Devin Watson, Summit Academy Completed 19 of 27 passes for 308 yards and five touchdowns as the Bears used a large fourth quarter to rally past Millard for a 36-22 win.

Cooper Black, San Juan – He caught three passes for 70 yards and two touchdowns, both in the first half, and also recorded an interception when San Juan rolled past Canyon View 42-7.

Easton Jensen, Parowan – Had a big game leading Parowan to a 49-7 win over Rich when he stormed the ball six times for 120 yards and three touchdowns.

We share your enthusiasm for the game! Receive daily updates on our best coverage of your favorite teams.