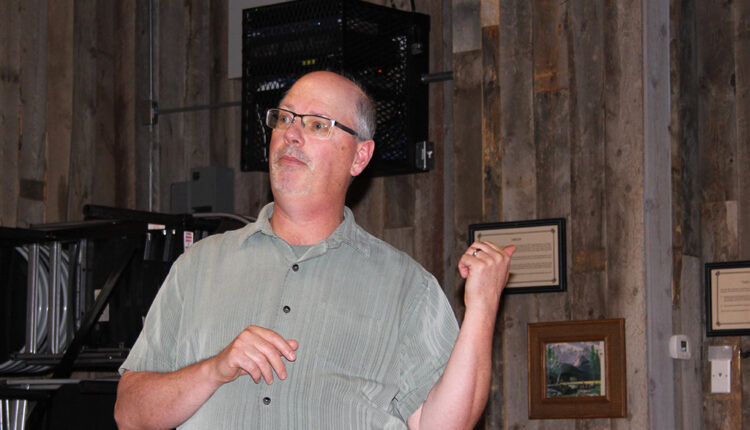 EVANSTON – “I was born and raised in Green River and attended the University of Wyoming, so I spent a lot of time on Interstate 80; and get stuck in Laramie because of the weather conditions. That 77 miles between Rawlins and Laramie is an uncomfortable stretch, ”University of Wyoming archivist John Waggener told the audience at the Brown Bag Lunch at the Uinta County Museum last month.

Waggener was the keynote speaker at the August Lunch series to discuss the research in his book, “Snow Chi Minh Trail: A History of Interstate 80 between Laramie and Walcott Junction” (50th Anniversary Edition). Waggener said the story behind the development of the I-80 became a personal interest as it traveled many miles.

During his research, Waggener found that the Wyoming Highway Commission assumed the interstate would only follow US 30, but the federal government had other plans. Federal agencies, Waggener said, wanted to cut about 20 miles on the trip on a different route. The route planned by the Feds would bypass communities and had severe winter conditions.

The I-80 vs. US 30 debate took place in the US Senate from 1956 to 1959. It even lasted until 1973. Senator Gayle McGee fought long and hard with the Federal Bureau of Public Roads, but the Wyoming Highway Commission lost the debate. An interesting fact, Waggener said, was that during the debate in the 1950s, the Wyoming Highway Department put stops on the freeway and asked motorists if they’d rather save 20 miles on their trip or stop in cities while en route. Ninety percent responded that they’d rather save the 20 miles.

Since the Interstate Highway is a federal highway and motorists from all over the country use it on their way to another location, the thought was that the most important thing was to save the miles, Waggener said, adding that the truck and bus industry is doing a strong lobby with the Senate. Many trade-offs have been suggested; one walked next to Elk Mountain and another walked from Casper in Laramie on I-25, but Waggener said, “The federal agencies had their own plan.”

Waggener said for years there was a myth that Lady Bird Johnson, wife of President Lyndon B. Johnson, had something to do with route choice. Lady Bird had come to Wyoming in 1965 for the inauguration of the Flaming Gorge Dam, and the myth was that she had told them to move the highway next to Elk Mountain as part of their freeway beautification project.

“However,” said Waggener, “Lady Bird Johnson was never in the area, and the route for I-80 was suggested in 1955, ten years before her visit. So that we can bring this myth to bed. “

Construction on I-80 began in the summer of 1966 and it took four years to build the 77 miles between Laramie and Walcott Junction. A dedication ceremony and ribbon cutting was held in Arlington on October 3, 1970, with 400 in attendance. Drivers arriving from a soccer game at the UW were an enthusiastic audience due to the ceremony that took place in the middle of the autobahn.

Four days after the ceremony, I-80 was closed due to winter weather. Waggener said, “The Wyoming people could have said, ‘We told you!'”

Waggener used the name “Snow Chi Minh Trail” because that’s what the Wyomingites called it. He found a story in the Rawlins Daily Times on October 12, 1970 relating to the US bombing raids on the Ho Chi Minh Trail and the description of the weather there, which corresponded to the weather on I-80 in Wyoming which he thought might have been the origin of the Wyoming people who named the 77 miles of I-80.

When journalist Charles Kuralt was driving a feature section on I-80 in Wyoming in January 1972, he called it the worst street in the United States In Kuralt’s book “On the Road” he mentions the Valentine’s Day massacre, a mass column of motorists on I-80, during which he and his photographer took an injured woman in her car to the hospital in Laramie.

Waggener continued the story of I-80 in Wyoming with a discussion of creating snow fences to control snowdrifts to keep the journey going. Different types of fences were used and none was enough to stop the massive snowdrifts from excessive wind. There were 24 areas with major problems with snowdrifts and wind.

WYDOT had never dealt with anything like this before, so they enlisted the help of the Forest Service. Together they researched which type of fence would work with true-to-scale models. In 1971, they finally developed the Wyoming fence, which is known and used around the world. This 12 foot high snow fence is still in use today.

“The Wyoming fence should be our icon, like the cowboy. The Union Pacific put snow fences in place within weeks of we became a territory in 1868, ”Waggener said.

The next problem WYDOT faced was controlling traffic when roads needed to be closed. From 1970 to 1973, hundreds of drivers were stranded on the highway. WYDOT’s first solution was to have staff on the freeway waving a stop sign at the lockout, which was a waste of manpower and unsafe.

In 1973, WYDOT installed the first gate at Laramie and Walcott Junction. From 1991 to the present day, folding doors and overhead information boards have been installed. Signs with variable speed limits were installed on the motorway in 2008 and expanded in 2010. WYDOT also placed sand sheds on I-80 and established a mission control center in Cheyenne that manages the signs, power and data.

“History is present and ancient history. What does the future look like for I-80? Increased Traffic? A recent study showed that 60% of all traffic on I-80 is commercial vehicles. WYDOT is building more parking spaces on I-80 and brake lanes for trucks to ensure safety, ”said Waggener. “A UW professor is currently working on a computer program that could link the communication between all trucks on the motorway.”

Waggener ended his presentation with the words: “Thank you for coming. Be safe and enjoy wonderful Wyoming. Incidentally, the proceeds from the sale of my book will go to the Wyoming Historical Society and the Uinta County Museum. “

A Covid Test Costing More Than a Tesla? It Happened in Texas.

Death in Dallas: One Family’s Experience in the Medicaid Gap