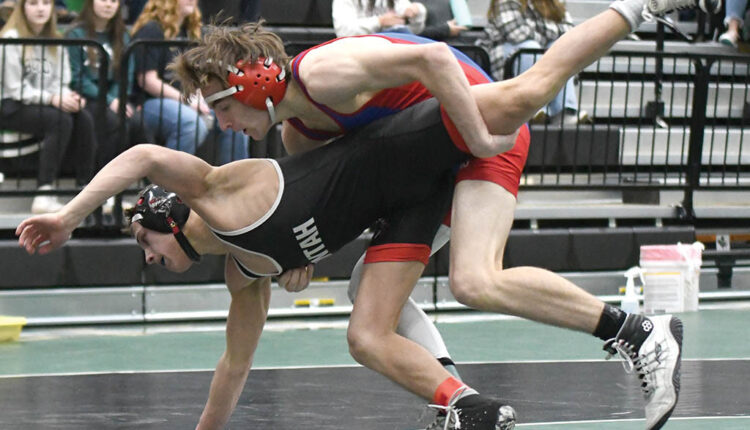 The Evanston High School wrestling team had a solid showing at the Thoman-Jackson Invitational in Green River over the weekend, third in the Gold Division.

The Red Devils went 6-1 in the dual-meet format, beating Worldland 57-18 in the 3rd-place match. Uintah, Utah won the team title, followed by Green River in second; Pinedale rounded out the top 5.

“It was good competition,” said EHS head coach Larry Wagstaff. “We competed well against some good schools, then we wrestled Vernal [Uintah High School, Vernal, Utah], and got a lesson taught to us. But we’ll move on from there, continue to work, take some of those lessons and move forward, continue to get better.”

The Red Devils opened the tournament Friday with a 66-11 win over the Renegades – a team made up of wrestlers from various schools – followed by a 68-12 drubbing of Campbell County. Evanston received a bye in round three, then narrowly defeated Rawlins 39-37 in round four. The Red Devils closed out the first day of competition with a 73-6 rout of Grantsville.

In Saturday’s Gold quarterfinals, Evanston trounced Laramie 60-15, setting up a showdown with Uintah High School, from Vernal, Utah. The Utes showed why they’re the defending 5A Utah State Champions, handing the Red Devils their only loss of the tournament, 70-9.

Evanston shook off the loss to defeat World in the 3rd-place match, 57-18.

The Red Devils had one undefeated wrestler in Aiden Liechty, who was a perfect 7-0 at 182 pounds. Despite his perfect record, Liechty didn’t get an opportunity to compete in Best of the Best, coming up just short in point-total criteria.

“If not for the Uintah match, we would have had several wrestlers who were undefeated, so that’s saying something for a tournament of this size,” Wagstaff said. “I think all of our wrestlers did really well – they all wrestled pretty solid. A lot of them went 6-1 or 5-2. We’ll continue to grow as a team, and continue to push each other. It’s fun.”

Benton’s tournament was highlighted by a pin over Uintah’s Rykan Hacking, one of just two wins the Red Devils had against the 5A powerhouse Utes. Roberts – currently ranked No. 2 in 3A by wyowrestling.com – decided Rawlins’ Ezra Archuleta 4-1, and pinned Campbell County’s Logan Ketterling; both wrestlers are ranked no. 5 in 3A and 4A, respectively.

For the Lady Devils, Aaliyah Martin finished second at 235 pounds, as did Marty Dick at 155 pounds. Johana Saavedra finished third at 130 pounds, Sidney Liechty was fourth at 115 pounds and Ramsey Fearn finished fifth at 140-145 pounds.

The Lady Devils finished tied for fourth with Campbell County as a team with 57 points; Pinedale won the team title with 77 points, followed by Buffalo (63) and Worland (62).

This weekend will be a busy one for the EHS wrestling team, with the Jackson Duals scheduled for Thursday and the Tiger Grizz Invitational in Idaho Falls Friday and Saturday.

“The Tiger Grizz is a tournament hosted by two high schools – the JV will be in one school, the varsity in another,” Wagstaff said. “It’s great competition.”