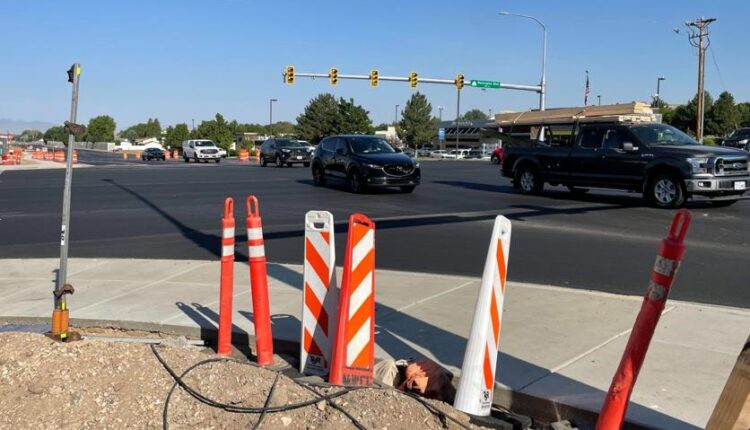 NORTH OGDEN – Drivers in North Ogden can breathe a sigh of relief, at least in part.

The entrances to the busy 2600 North Washington Boulevard intersection had been washed into one lane at times due to construction work, resulting in rumbling traffic, long lines of cars and frustrated drivers. Late last week, however, the crews finished most of the road works at the intersection, which was being expanded to accommodate more cars and largely reopening them to traffic.

“We’re mostly done,” said Utah Department of Transportation spokesman Zach Whitney. The crews completed the paving work last week and will “be grazing for the next few weeks. The plan should be ready by the end of the month.”

“We will try. As long as people follow the rules and they are safe, we will continue with this solution,” said North Ogden Mayor Neal Berube. City guides had proposed the complete closure of Pleasant View Drive west of 400 East due to road classification issues that could create visibility problems for motorists. According to this earlier plan, the blocked road section would have been integrated into the Bicentennial Park.

Despite these developments, drivers are still not completely free.

Work on expanding 400 East north of 2700 North from three to five lanes – two lanes and a central turn lane – continues and is expected to last through October. The eastern half of the north-south road has been closed to traffic since March, and drivers will be directed to the west side for the time being. 400 East is the extension of Washington Boulevard north of 2700 North and is to be extended beyond Elberta Drive.

Work on the intersection at 2600 North-Washington Boulevard included adding special left-turn lanes for each driveway, increasing the number from one to two in each direction. However, the crews had to overlook motorists who were driving the different directions in a single lane at times, which led to backlogs. “That took a lot of patience from the citizens,” said Berube.

Although the lane has been reopened for cars, work on the intersection is not yet fully completed. At least the landscaping work remains in place, and some orange and white barriers remained on the roadsides late last week. While the “final work” is still in place, “the heavy, high-impact construction is being completed,” said Whitney.

For now, Pleasant View Drive will remain closed to traffic to begin work on 400 East, although it will reopen after the project is completed, according to the plan approved by the city council last week. Pleasant View Drive has historically served as a vital link for Pleasant View residents traveling to North Ogden and Ogden, and its closure at 400 East has changed the driving patterns of many. North Ogden residents who live west of 400 East also use the carriageway.