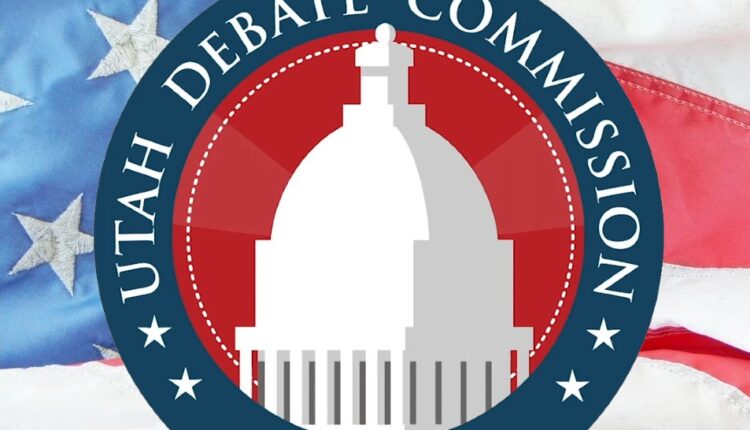 That announcement was made by the Utah Debate Commission (UDC) on Sept. 8.

Kerry Bringhurst, the station manager for Utah Public Radio, will moderate the debate between US Rep. Blake Moore (R-UT) and Democratic challenge Rich Edwin Jones at 6 pm on Oct. 10. That event is sponsored by the Utah Debate Commission (Image courtesy of UPR).

Bringhurst is a veteran broadcast journalist who serves as station manager for Utah Public Radio (UPR) in Logan.

Bringhurst will referee the face-off between incumbent US Rep. Blake Moore (R-UT) and challenger Democrat Rick Edwin Jones at 6 pm on Oct. 10

The debate that Bringhurst will moderate isn’t expected to generate much controversy. After defeating two Republican challengers—former Morgan County commissioner Tina Cannon and former civilian intelligence officer Andrew Badger—in the GOP primary in June, Moore is considered a lead-pine cinch to cruise to victory in the November election.

The statewide race for US Senate between incumbent Sen. Mike Lee (R-UT) and independent challenger Evan McMullin, on the other hand, is already making waves with national headlines.

The UDC announced Thursday that the debate in that Senate race would be moderated by former KSL radio host Doug Wright at 6 pm on Oct. 17

That debate, and others scheduled by the Utah Debate Commission, will be broadcast live on multiple local television and radio stations. It will also be streamed live from multiple locations, including media and university partner websites.

UPR is a member station of National Public Radio and an affiliate of Public Radio International (PRI) broadcasting to a statewide audience from the campus of Utah State University.

A resident of Nibley, Bringhurst began working as a reporter for KVEL “The Hot One” in Vernal, Utah at the age of 14.

Her radio news interests led her to Logan where she became news director for KBLQ while attending Utah State University. She graduated USU with a degree in Broadcast Journalism and spent the next few years working for UPR.

The station commenced operation in 1953 as KVSC, the Voice of the State College. The call letters changing to KUSU-FM in 1961 to reflect the change from Utah State Agricultural College to Utah State University.

The UDC also announced the moderators for other debates in Utah’s congressional districts.

The debate in the 2nd Congressional District will be moderated by Boyd Matheson, opinion editor for The Deseret News, at 6 pm on Oct. 14

The debate in the 3rd Congressional District will be moderated by Natalie Gochnour, director of the Kem C. Gardner Policy Institute at the University of Utah, at 6 pm on Oct. 6.

The debate in the 4th Congressional District will be moderated by Lauren Gustus, executive editor for The Salt Lake Tribune, at 6 pm on Oct. 12.

Man who ran over wife at Salt Lake airport, killing her, is sent to prison