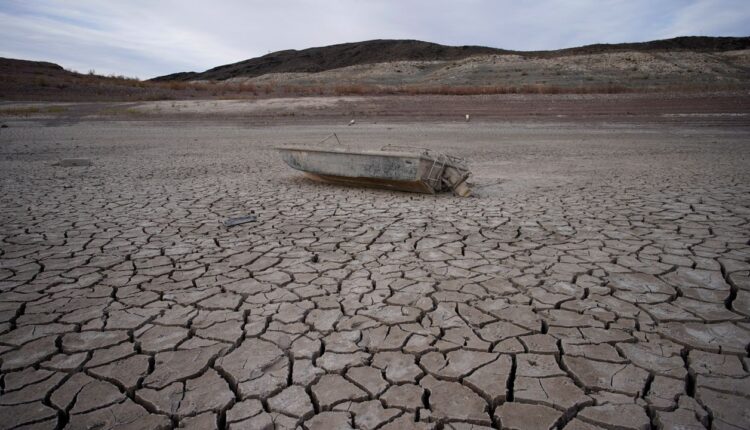 The water crisis in the American Southwest has reached a critical point. Lakes Mead and Powell, the two largest reservoirs in the United States, continue to break records for their lowest levels since first filling.

A formerly sunken boat sits on cracked earth hundreds of feet from the shoreline of Lake Mead at the Lake Mead National Recreation Area, Tuesday, May 10, 2022, near Boulder City, Nev. (AP Photo/John Locher)

Lake Powell, which provides electricity and water to millions in Arizona and Utah, is at 24 percent of full capacity. The water level has fallen to an all time low elevation of 3,522 above sea level, below the target minimum level of 3,525 feet for hydro power production. If the water level declines further, to 3,490 feet, it will be unable to produce hydro power at all.

Lake Mead is in a similar situation. The reservoir is currently at 31 percent capacity and fell below an elevation of 1,075 feet last August, triggering a Tier 1 shortage and significant cuts to the water distributions to Arizona and Nevada. The reservoir currently sits at 1,054 feet; if it falls below 1,050 feet it will set off additional rounds of cuts that will become increasingly severe as the lake’s level declines.

The decline in Lake Mead has been so severe that even dead bodies dumped decades ago have been discovered.

Desperate to navigate the crisis, the US Bureau of Reclamation (USBR)—the federal agency which is tasked with managing all federal water projects in the American West—proposed holding an extra 480,000 acre-feet of water (enough to provide water to 2 million people for a year) in Lake Powell to prevent the loss of hydro power capacity.

A further 500,000 acre-feet of water was released from the Flaming Gorge Reservoir on the Utah-Wyoming border last month to bolster Powell’s water levels. The two actions combined are expected to raise the water elevation by 16 feet.

This proposal was supported by state water managers in the Lower Colorado River Basin, but they were concerned about how the holding might affect water levels in Lake Mead, the source of water and electricity for 25 million people and hundreds of thousands of acres of farmland.

Desperate to prevent triggering another round of water cuts, the state governments agreed to the USBR’s proposal on the condition that they not be penalized for water shortages in Lake Mead. The USBR accepted and agreed last Tuesday that it would consider the half-a-million acre-feet of water kept in Lake Powell as existing in Lake Mead.

In effect, the US Bureau of Reclamation has decided to pretend there is water in a reservoir that does not exist.

The decision is as desperate as it is short-sighted. The UBSR’s imaginary water may prevent the imposition of further cuts for the rest of the year, but it will have to reckon with the true deficit sooner rather than later.

The Southwest is experiencing what scientists now consider to be the worst two-decade drought in 1,200 years. A recent report by the National Oceanic and Atmospheric Administration (NOAA) found that Lake Powell will receive only 60 percent of its average annual flow this year. Additional research suggests that up to 43 percent of the severity of the drought can be attributed to climate change.

However, the crisis is ultimately one of human design.

This November, it will be 100 years since the signing of the Colorado River Compact. The drafters of the compact and the federal legislatures that approved it deliberately ignored warnings from hydrologists that the Colorado River’s flow in the early 20th century was abnormally high, and that the real average flow of the river was much lower.

This reality cut across the demands of Western states to appropriate as much water as they could, and the interests of Eastern capitalists who saw an opportunity to expand agricultural and industrial production. Thousands of acres of desert were irritated to grow cotton for the textile moguls and alfalfa for the booming cattle industry.

As a result, the compact over-allocated the available water from the very beginning, setting the Western states on a collision course with nature in the not-so-distant future.

Now the reckoning with greed and unscientific planning has arrived. Following the Tier 1 cuts, farmers who had long relied on an abundance of irrigation water watched as their fields dried and crops failed. Unable to maintain their crops or afford more efficient watering systems, many smaller farmers are increasingly abandoning their farms altogether, often selling the land to energy companies for the installation of solar power plants.

Agriculture is by far the largest consumer of water in the West, accounting for almost 70 percent of all water consumption. While improvements in water conservation have been made in recent years, it has been too little to combat the profit interests in the agricultural industry.

Agriculture generates $23 billion a year in Arizona and $50 billion in California. Both states dedicate a considerable amount of land and water to growing high-water-use crops such as alfalfa (a feed crop for cattle and dairy cows), cotton, rice and almonds.

News coverage has so far described the USBR’s action as an “accounting trick” or a form of water “credit.” A more accurate analogy would be fraud.

The Biden administration is desperate to keep the economy moving, particularly the Southwest’s agricultural industry, and has decided that false water accounting is the only way to prevent cuts to irrigation distributions. Cuts may impact domestic water use, but it is ultimately farmers who will bear the brunt of the restrictions.

Under proper scientific and basin wide water planning, these lands, some of the most productive in the country, could grow food and commercial crops in an environmentally sustainable way. But under the anarchy of the capitalist system, farmers are encouraged to pour their resources into profitable but water-guzzling cash crops.

No amount of “accounting tricks” can solve this crisis. Without a complete restructuring of the world’s agricultural system, under socialist planning for the benefit of all people and the environment, the American Southwest may soon find itself in a new Dust Bowl.