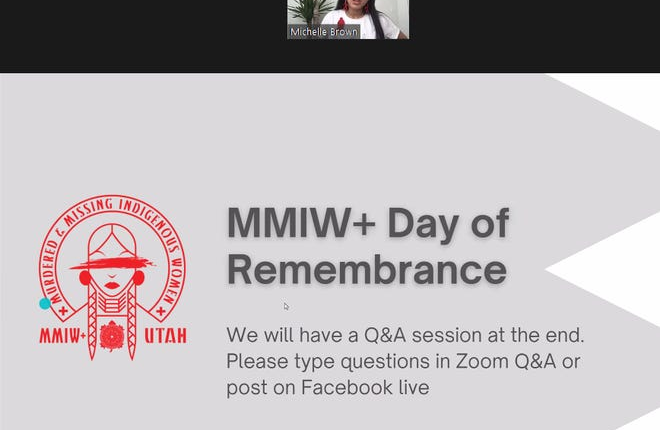 For many, it’s a day of trauma and sadness. It’s also a day to raise awareness of an epidemic that ranks Utah as the eighth worst in the nation.

The event was hosted by the Peaceful Advocates for Native Dialogue and Organizing Support (PANDOS), a group organizing a campaign for Utah’s MMIW +. Romero is co-chair of the Task Force on Murdered and Missing Indigenous Women and Girls in Utah, founded in 2019.

Michelle Brown, Chair of PANDOS ‘MMIW + Campaign, started the evening’s discussion by introducing the panelists and giving a brief overview of the Utah epidemic.

“Natives have been brought into the perfect environment to be missing and not found,” Brown said, noting the ongoing genocidal actions. “Dehumanization is 100% linked to this epidemic.”

The artist and activist Denae Shanidiin, who represents the advocacy group Restoring Ancestral Winds from MMIWhoismissing and Indigenous Anti-Domestic Violence, discussed how the fight against this epidemic should be led by indigenous peoples.

“This violence has only increased with COVID,” Shanidiin said. “It is also a crime not to support victims and families when it comes to violence.”

About 140 people replied to the event on Facebook, but since it was a virtual event, the number of actual attendees was not immediately known.

Park remarks::Petroglyph graffiti is an act of genocide with the second defeat this month

President Joe Biden proclaimed May 5th Awareness Day for Missing and Murdered Indigenous People, a move other presidents have taken in recent years.

Tamra Borchardt-Slayton, chair of the Indian Peaks Band of the Paiute Tribe of Utah and a former member of the Task Force on Missing and Murdered Indigenous Women and Girls in Utah, said the shift in focus from women to all indigenous peoples is necessary.

“It’s a great thing and a direction we need to take for education,” said Borchardt-Slayton.

Changing the wording will raise awareness of more than just missing and murdered indigenous women and girls, which include two ghosts, men, children and non-binary indigenous peoples.

“We understand this violence as gender-based violence,” said Shanidiin. By turning women into human beings, “it reflects that we are all inclusive because we all suffer from this violence. We need more data on it.”

Last month, Home Secretary Deb Haaland announced the formation of a Missing and Murdered People Unit to delve deeper into the search for justice for Native Americans.

“I think it’s historic for us because we were a downtrodden voice for a long time,” Borchardt-Slayton said at the time. “It’s an epidemic that is still going on … it’s an amazing thing, especially when they are able to do what their goals are.”

For this year’s memorial day, Sec. Haaland shared a video in which she draped a red scarf on an empty chair in her office to symbolize those who have disappeared.

“It is an unfortunate tradition for those of us who honor this day. But this year we are more ready than any other to resolve this crisis,” she said in the headline.

The Utah Task Force to fight this epidemic has not met since last November, but is due to meet again in June after a few alternate dates, Romero said.

“If I have to extend [the deadline for the task force] I’ll do it again, “said Romero.” I don’t want it to be a trend, these are our families. “

Romero, a Latina and Indigenous woman, explained how the Restoring Ancestral Winds bill was launched to collect data on this epidemic.

“We have our stories, but the data helps some people make those stories come true,” said Romero. “My top recommendation is just to believe people … my top priority is to believe and listen.”

A study, widely cited by the Murder Accountability Project in Utah, found that less than 30% of Native American murders in Uintah County were reported to federal agencies to keep them away from official hate crime and murder statistics and from intense investigation.

Utah has the eighth highest number of murdered and missing indigenous women and girls in the nation, according to a national study by the Urban Indian Health Institute in Seattle.

“Native Americans make up 1.5% of the state population, but the Native American homicide rate is 4.15 times that of Caucasians,” Borchardt-Slayton said in her statement for the Utah Task Force last year.

K. Sophie Will is the National Park reporter for The Spectrum & Daily News, part of The GroundTruth Project’s Report for America initiative. Follow her on Twitter at @ksophiewill or email her at [email protected] Donate here to report for America.