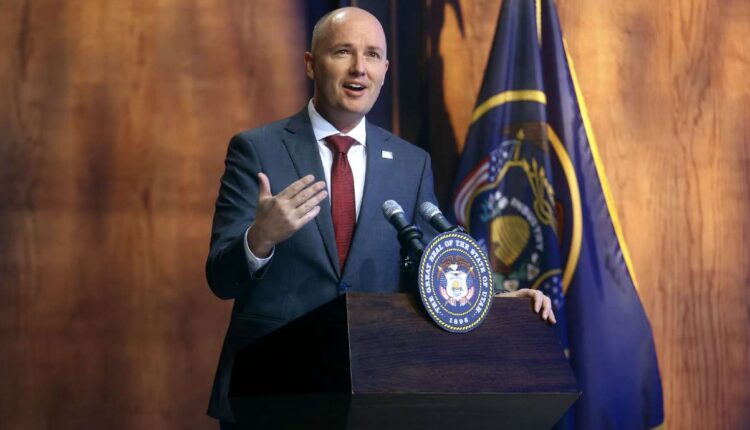 Governor Spencer Cox speaks at his monthly press conference at the Eccles Broadcast Center in Salt Lake City on Thursday where he announced that all adults in Utah are now eligible for COVID-19 booster vaccines. (Kristin Murphy, Desert News)

SALT LAKE CITY – All Utah adults are now eligible for COVID-19 booster vaccines as all communities in the state have high rates of transmission of the disease, Governor Spencer Cox announced Thursday.

Starting Friday, Utah vaccine providers will be asked to offer booster vaccinations to any Utah adult who wishes to receive one, Cox said during his monthly PBS press conference.

Also on Thursday, Utah health officials confirmed 1,789 new COVID-19 cases, as well as 13 additional deaths on Thursday. The seven-day rolling average of new cases is 1,633 per day, and the rate of positive people tested is 16.6%, according to a daily update from the Utah Department of Health.

Pointing to the widespread confusion about eligibility, Cox said the state wanted to simplify the process and help ensure people go on vacation “as safely as possible”.

According to the guidelines of the Centers for Disease Control and Prevention, booster syringes are suitable for adults 18 years of age and older who live or work in high-risk environments.

Cox said over 44,000 children ages 5 to 11 received their first dose of the vaccine in the two weeks they were available to that age group.

“These drugs will initially be available in limited quantities and reserved for those most at risk of hospitalization and death. They also require a prescription and a visit to a provider’s office, ”said Cox.

Emergency clearance is expected to be granted by the Food and Drug Administration in the next few weeks, he noted. The state is preparing a distribution plan to get the drugs to those who need them in the state.

Utah has also ramped up its monoclonal antibody treatment delivery system, Cox said. Last week the state made more than 1,000 of these treatments available.

But he said he wanted to emphasize that vaccinations remain the best way for people to protect themselves and those around them. Cox urged the Utahners to have at least one dose of the vaccine by Thanksgiving if they haven’t already.

This week, the governor’s economic development office also announced a new grant for small businesses with fewer than 50 full-time employees working 40 hours or more. The program helps them pay their employees time off to get the vaccine, have their children vaccinated, or if they need time off because of side effects after receiving the vaccine. The grant includes $ 500,000 in available funds and applications that opened on November 16.

“Dozens of companies have applied, but funds are still available,” said Cox.

Public Opinion Is Unified on Lowering Drug Prices. Why Are Leaders Settling for Less?

KHN’s ‘What the Health?’: Boosting Confusion