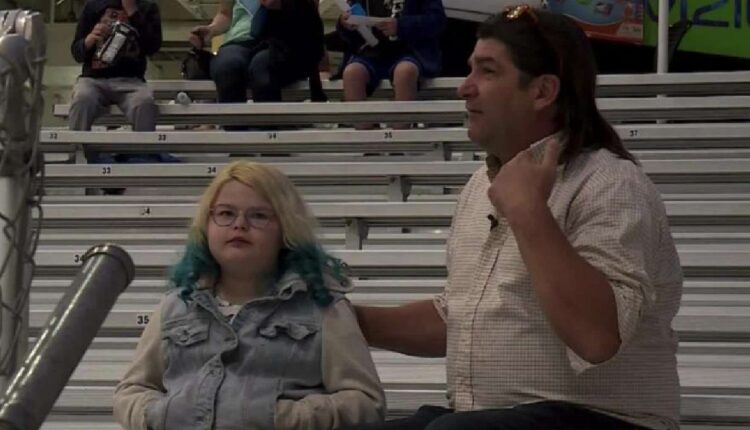 PROVO — An 11-year-old girl suffering from a terrible disease became a princess for a night and helped raise awareness for childhood cancer thanks to one of Utah’s loving communities.

When the Flamm family lost their daughter, Millie to leukemia nine years ago, they wanted her light to shine on.

“A family organized a 5K in Millie’s honor after she relapsed,” Brady Flamm said. “It meant so much to us; we wanted to give back.”

Over the past nine years, Millie’s Princess Foundation has helped more than 130 families who have a child fighting cancer.

Saturday night, the organization sponsored a Skate for Cancer Event at the Peaks Ice Arena. They matched funds up to $5,000, and Doug Smith Subaru also matched donations.

Skaters took to the ice in honor of Sammy Anderson, an 11-year-old battling an optic nerve glioma brain tumor.

“It’s so wonderful,” Cory Anderson, Sammy’s father said. “It just shows how much the community cares.”

Sammy clapped along to the music and laughed as the skaters performed.

“Sammy is into poison dart frogs, geckos and saltwater fish. She is fun and likes to experience the world in a unique way. She is so creative,” Anderson said.

Many skaters said they have been performing in this event annually for many years. Kate Jones of Salem said this event was her first ice skating performance — nine years ago. Now she is about to leave for college.

“This has been such a valuable part of my life,” Jones said. “I actually lost all of my grandparents to cancer, so this is very special and personal to me.”

“These children really get left behind in a lot of ways because of their compromised immune systems,” Flamm said. “This is a chance to help other families who are going through what we went through: spotlight their kids as true heroes and help pay some of their bills.”

Flamm’s daughter Millie fought leukemia for half of her short and beautiful life, but he said she always had positivity to share.

If you would like to donate to Sammy you can do so here.*

*KSL.com does not assure that the money deposited to the account will be applied for the benefit of the persons named as beneficiaries. If you are considering a deposit to the account, you should consult your own advisers and otherwise proceed at your own risk.

Local events and things to do this week, May 8-14