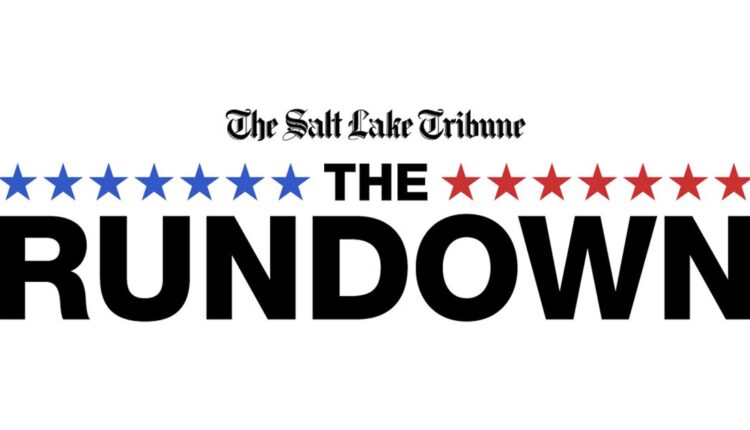 Good morning Utah and TGIF! Thanks for reading “The Rundown”.

💻 My inbox and DMs are open to you. Do you have a news tip? Interesting political gossip? Do you just want to talk about politics? Email me or find me on Twitter @SchottHappens.

Get this newsletter in your inbox every weekday morning. Sign up here free of charge.

(Rick Egan | The Salt Lake Tribune) Rep. Blake Moore shares his experience at the Capitol on January 6 during a ward meeting in the North Branch of the Weber County Library in North Ogden on Tuesday, June 1, 2021.

Inside reports Moore was made aware of three stock option deals on his behalf in mid-August. But Moore didn’t file the business disclosure until September 24, which was several days past the legal deadline.

This is the second time this year Moore has missed a state deadline for reporting trades. In July, Moore failed to disclose more than 70 trades valued between $ 700,000 and $ 1.1 million. The House of Representatives Ethics Committee fined Moore for prior late filing.

You need to know this by Friday morning

🏛 The Senate broke an impasse in raising the debt ceiling despite “no” votes from Sens. Mike Lee and Mitt Romney. Romney railed against Senate minority leader Chuck Schumer after voting for his speech accusing Republicans. [Tribune]

👀 Governor Spencer Cox’s campaign manager resigned after an investigation into allegations of sexual misconduct. The investigation also found that Austin Cox (no relative) was involved in other “hostile behaviors” towards campaign staff. [Tribune]

🏛 Trump has told his former aides not to cooperate with the House of Representatives committee investigating the January 6 riot. [WaPo]

🚗 Tesla has announced that it will relocate its headquarters to Austin, Texas. Company boss Elon Musk had clashed with politicians in California, which prompted the move. [BBC]

📰 Journalists Maria Ressa and Dmitry Muratov were named Nobel Peace Prize winners on Friday. The two were recognized for their work to maintain press freedom in the Philippines and Russia. [WaPo]

Summary of the news from Utah on Friday morning

– Jordan Miller of the Tribune contributed to this report.