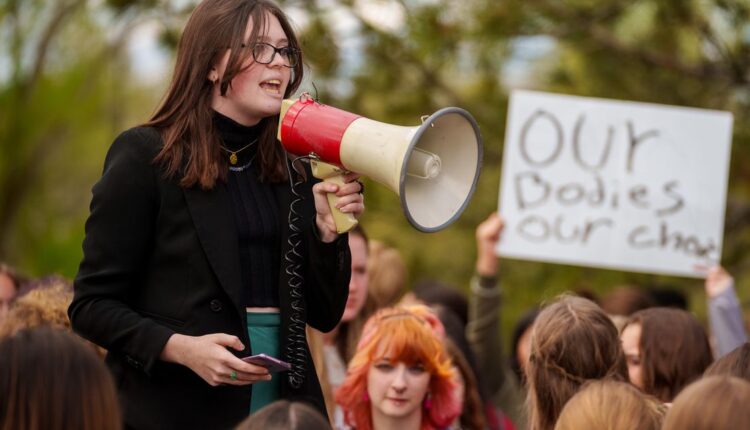 “This is absolutely a high school issue,” one student said. “… It’s about everybody.”

(Trent Nelson | The Salt Lake Tribune) Students at Highland High School walk out in support of abortion rights, in Salt Lake City on Thursday, May 12, 2022.

Students spilled onto the lawn at East High School during a walkout Thursday, holding signs, chanting and cheering in support of speeches about abortion rights.

They were joined by hundreds of other students across Salt Lake City, who also walked out of Highland and West high schools shortly after 10 am Thursday. There were also walkouts at other schools in the Salt Lake Valley, including Olympus, Taylorsville and Skyline high schools, as well as schools in other states, such as Kentucky and Texas, according to news reports.

A leaked draft opinion was published earlier this month indicating that the US Supreme Court may overturn Roe v. Wade, the 1973 landmark abortion case. The school walkouts Thursday are the latest in a series of rallies that Utahns have held in response to the news.

(Francisco Kjolseth | The Salt Lake Tribune) East High Students walk out to protest the Supreme Court’s leaked decision to overturn Roe v Wade and give states the power to ban abortions on Thursday, May 12, 2022. .

More than 100 students stood in the courtyard at East High School with signs, with two reading, “My arms are tired of holding this sign since the 1960s” and “If you don’t like being forced to wear a mask, imagine being forced to have a baby.” They chanted, “Not the church, not the state, women must decide their fate,” and “Pro-life is a lie, they don’t care if people die.”

Across the courtyard, another group of students, mostly boys, formed at the north entrance to the school. They jeered and shouted at the protesters. Some other male students milled around the crowd making comments to undermine speakers.

Several girls asked one young man to leave the demonstration, and after multiple refusals, one girl dumped her water bottle over his head. All of the fliers posted in boys’ bathrooms at East High announcing the walkout were torn down, organizers said.

“I don’t understand why men, who will never experience the pain of giving birth, the pain of period cramps, nor the pain of breastfeeding, think they can choose the outcome of the most difficult decision a woman can make,” 17- year-old East student Grace Russell told the crowd.

Students at East High School have started to walk out in support of Roe v. Calf.

There are other protests happening at Highland High School today as well. #uted pic.twitter.com/1KM0PcNIDq

At Highland High School, speakers used a megaphone to give short speeches near the flagpole out front, before moving off school property over to Sugar House Park. They talked about the need for bodily autonomy and for teens to get engaged and register to vote, if they can.

“This is absolutely a high school issue,” one speaker said. “… It’s about everybody.”

(Trent Nelson | The Salt Lake Tribune) Students at Highland High School walk out in support of abortion rights, in Salt Lake City on Thursday, May 12, 2022.

When one of the Highland High organizers went to the rally at the Capitol on May 5 — which over 1,000 people attended in support of abortion rights — she noticed a girl who was “absolutely sobbing.”

“I ran up and hugged her,” she said, and it morphed into a bigger group hug.

She and the girl connected on social media, and they started talking and planning the walkouts at Salt Lake City high schools.

Whether people agree with the students protesting in support of Roe v. Wade or not, the Highland student said, “I think they should appreciate that all of us kids are coming together and fighting for what we believe in.”

The Supreme Court will soon rule in Dobbs v. Jackson Women’s Health Organization, a case that stems from a 2018 Mississippi law banning abortions after 15 weeks of pregnancy, with some exceptions. The high court’s decision wasn’t expected to be released until June, or possibly July, before its session ends.

Depending on how the Supreme Court officially rules, either Utah’s trigger law — which outlaws most abortions in the state — or a ban on the procedure after 18 weeks of pregnancy are likely to go into effect in the Beehive State.

Becky Jacobs is a Report for America corps member and writes about the status of women in Utah for The Salt Lake Tribune. Your donation to match our RFA grant helps keep her writing stories like this one; please consider making a tax-deductible gift of any amount today by clicking here.