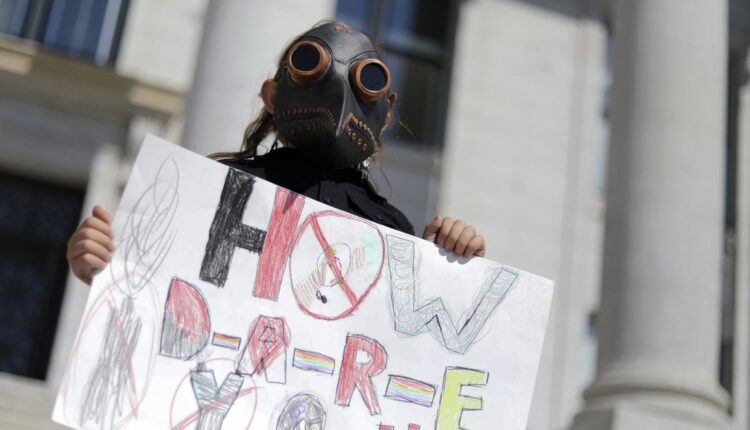 Raquel Juarez was a student at Ben Lomond High School two years ago when Swedish youth activist Greta Thunberg emerged as the leading voice for reform to combat climate change.

By then, Thunberg had already started Fridays for Future, a global movement in which students leave the classroom to protest the lack of political pressure to address the growing problems of climate change. Inspired by her, Juarez took the opportunity to bring this movement to Utah.

In 2019, on the day of the first Fridays For Future event in Utah, Juarez slipped out of class and commuted from Ogden to Salt Lake City to urge Utah lawmakers to look into the matter.

She has now graduated and is now working full time, but her concern about climate issues is still ongoing. During the week that leaders meet to discuss issues such as climate change at the United Nations, she helped organize another strike in Utah, which coincided with a global climate strike on Friday.

“We will not accept that. It is not right,” said Juarez. “We will put our studies aside because of our fundamental human rights, a sustainable future in life.

About a few hundred middle and high school students – mostly from the Salt Lake City school district – gathered in Washington Square before marching to the State Capitol and singing phrases like “Don’t let our planet die, climate change is not a lie.” and: “Hey, hey, you, you, we also deserve a future.” It was the first major protest since the 2019 event.

As the crowd thinned as the afternoon wore on, dozens stayed in the Capitol, kneeling down and writing on a large banner the social aspects of climate change they want to eradicate in the future – topics like racism, oppression, and ignorance. Many of those who stayed then walked through the shield as a symbolic shattering of the problems they hope will be resolved in the near future.

The participants of the Friday March say that they are tired of the fact that the climate is an issue that is passed on from generation to generation like a baton. They feel they are bearing the brunt of the climate impact, especially as new reports say the world is warming faster than originally thought. They also believe it’s an issue that is not being taken seriously enough by state, federal, and global lawmakers right now, which in their opinion means that it may be too late for them for their generation to fill those political seats.

With Utah still in one of the worst droughts on record, protesters said Friday that this summer brought about different memories of the future: more wildfires, more flash floods, more hurricanes and more drought. Almost appropriately, a light layer of smoke from distant forest fires almost obscured the view of Wasatch Mountain as the organizers spoke from the steps of the State Capitol overlooking the Salt Lake Valley.

“I think everyone should be concerned about what is going to happen because the effects are now on,” said Natalie Roberts, a West High School freshman who helped organize the rally on Friday.

Fridays For Future supporters gather for a global climate strike at the Capitol in Salt Lake City on Friday. Fridays for Future is a youth-led and organized global climate strike movement that began in August 2018 when 15-year-old Greta Thunberg started a school strike for the climate. Laura Seitz, Deseret News

Students like Roberts are realizing for the first time that they can drive change even when they are not in office and not even able to vote. She was inspired to join the cause by Thunberg, and even more so after attending the 2019 Utah rally as a middle school student.

The 14-year-old sat at the head of the rally this time, marched up State Street with a megaphone and led the chants along the way.

Friday’s protest is now the norm for them. It was her 60th Fridays For Future Utah event, just two years ago. Roberts makes his way to the State Capitol after school to attend organizational events that take place every Friday after the last bells ring.

Juarez said the climate movement in Utah is not only inspired by the global discussion. It’s also inspired by the recent March For Our Lives protests against gun violence, Black Lives Matter, and even the civil rights movements of the 1960s, all of which were largely driven by younger activists.

“I think youth in general has moved things throughout history that have been unfair for a long time,” she said.

Climate change has become an increasingly bipartisan issue in Utah in recent years. The University of Utah’s Kem C. Gardner Policy Institute held a discussion earlier this month on the subject, in which state lawmakers on both sides of the aisle agreed that climate change is happening and must be addressed. The biggest political difference now is how to deal with it today and how to move forward.

This is where the problem lies in Utah, in the country’s capital, and in many countries around the world. Despite new scientific reports and the growing number of natural disasters related to climate change, Roberts believes that leaders are still not acting urgently enough to address the problem.

“You’d think it would scare people, but surprisingly it doesn’t,” she said.

For this reason, she plans to take part in more strikes and rallies in the future and hopes that her colleagues will join her.

Juarez agrees. She believes climate change is more important to her generation because it and her descendants are likely to be the toughest to deal with, which is why she continues to organize rallies.

“We’ll see the effects, it’s different from previous generations,” she said. “We have to live with that.”