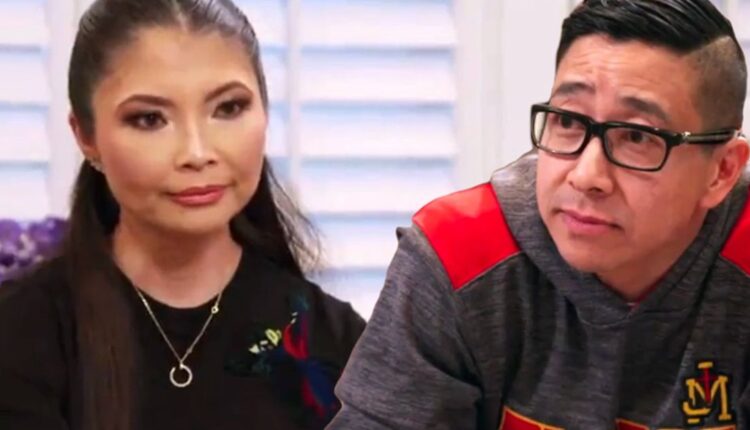 It turns out that a clip of “The Real Housewives of Salt Lake City” from Jennie Nguyen’s husband suggesting that they add a sister to their family is no joke. He’s dead serious.

And Mary Cosby, who was truly stunned when the fact that she married her step-grandfather became the topic of season 1, has bigger problems. She is not happy in her marriage and fears that she is facing a “catastrophe”.

Jennie and her husband Duy go cross-country skiing to Solitude. You’re having a great time until Duy brings up the topic of having children again. When asked why he wants more, Duy replies: “So now we can help to replenish this earth. This world is in a bad state. It takes more good people. “

Jennie doesn’t look like she’s going to buy this. Would you?

Jennie argues that they are both older – she’s 45, he’s “fifty” – and don’t have the energy to deal with babies and toddlers. And she points to her previous history: “A miscarriage is difficult enough for a mother. I’ve been through 10. “

(Nine miscarriages and one daughter who died shortly after she was born.)

“I don’t want to continue to have the feeling that something is wrong with me,” she says tearfully. Duy says he gets it, “but deep down, yeah, I still want more kids.”

Jennie believes this has a lot to do with her late daughter. At the beginning of the episode, she told Meredith Marks and Lisa Barlow that the baby was “fine” for the first hour after an emergency caesarean section. Then her heartbeat dropped and she died and no one knows why. You tried to revive her. ”And Duy“ was there all along ”.

Duy finally told the doctors it was time to admit the baby couldn’t be resuscitated. Jennie was sedated and didn’t know what had happened until the next day. “I think there’s something in him that feels like he’s lost something,” Jennie says, and he was “traumatized.”

Duy confirms that. That was “the worst day of my life. … Yes, there is a void. … When her birthday comes, it hurts. I can’t replace them, but I just think we should have more children. “

Duy suggests a surrogate mother, Jennie says no. Same with adoption. “Our life is wonderful right now. Why do you want to change it? “Asks Jennie.

“I just want more kids,” Duy replies. Then he drops a bomb.

“Why don’t we get a sister wife?” Duy asks. He’s not kidding and Jennie is not happy. “Are you serious?” She asks.

“I’m dead serious,” says Duy, adding that “it’s not uncommon in our culture. You know, my grandfather had four wives. They all got along. He was able to raise a big family and the stories I’ve heard are amazing. “

How this would fit into their Catholic religion is not discussed.

“I know that happens in our culture,” says Jennie. “In Vietnam, my father [had] several girlfriends. But is it something I want in my marriage? Under no circumstance! … I am so speechless. I mean, if murder hadn’t been a crime, he would have been dead in the snow. “

And when Duy claims that adding a sister woman is “for our family,” Jennie is furious.

“This is not about our family. This is about what you want, ”she says. “You don’t think about me.” She tells him that she is “mad” and walks away. Duy asks her to come back, but she continues.

Is Mary’s Marriage in Trouble?

Mary’s husband, Robert Sr., was in Florida when the COVID-19 pandemic crippled the country and got “stuck” there.

“We didn’t think it would take a year,” says Mary. But it didn’t bother her. “I loved it. It was fantastic. I enjoyed myself. … It has become normal for Robert and I to be apart.”

When you see her scolding him, how he cooks chicken and complains about the kind of rice he makes, one wonders if the breakup wasn’t a problem with Robert Sr. either.

Mary says she was “super excited” when Robert Sr. first returned home, but she soon started “thinking of places to go”. And she adds: “I don’t think we know each other.”

Later in the episode, Mary Meredith, whose husband spends a lot of time out of town, says, “I like the way you live.” And that she and Robert Sr. would not share a bedroom, that was his idea. But now: “I don’t know what I would do without my own room.”

She wants to make Robert Sr. a completely different person, so that he “becomes what I want in him that I do not get”. And she says with big sighs and rolling her eyes that it is “exhausting” to wait for him to hold her, says that he is sorry to be passionate and “just to be alive”.

Mary worries that 18-year-old Robert Jr. is about to leave the house and leave her alone with Robert Sr. … Our whole marriage was based on this child. So it’s almost like I’m having to relearn this man. And since I know what I know now, I don’t want to get to know him. And I just see a disaster. “

Whitney is a conspiracy theorist

After Lisa Whitney meets Rose at the Onyx Pole and Aerial Fitness Studio in Sandy to swing out of the “silks”, the two seem to have reached a truce in their fighting relationship. Lisa and her husband John take Whitney and her husband Justin out to dinner at Nino Viejo in Farmington.

Everything seems to be going well until Whitney discovers that the restaurant’s owners, Aubrey and Marco Niccoli, are the same people who canceled Angie Harrington’s fundraiser in episode 4 of this season because “Lisa Aubrey called and Angie canceled.” says Whitney.

If that’s true – and Aubrey, Marco, and Lisa all deny it – we haven’t seen it. Neither did Whitney. She speculates and quickly goes into full conspiracy theory mode. Lisa invited her to this restaurant because she was “just manipulating me and playing the long game to bring me here tonight to prove your innocence,” says Whitney in a confessional.

In the restaurant, Whitney confronts Lisa and Aubrey loudly and profanely: “Are you kidding me? That’s so [expletive] staged. … I fell into a trap tonight. This is where I thought Lisa wanted to be my friend and she is trying to prove she wasn’t wrong. … You brought me here to cover your tracks. “

Whitney curses Lisa for not seeing events from her conspiracy theory perspective. And then she waves her arms strangely, “to fix my aura because I really don’t want to yell at you now.”

Whitney then switches over and wants to reconcile with Lisa, whom she has just called a liar. Lisa looks understandably ticked, but she agrees.

“My ancestors pushed handcarts over mountains so I think Lisa and I can get over it,” she says. “But I don’t think I can ever fully trust her.”

Whitney is obviously unaware of how unreliable she is.

Jen goes shopping for the ‘girls’

Jen Shah and her assistant Stuart go to Baranof Jewelers in Park City to look for gifts for the other housewives. “I want to show them that I just want to leave everything behind and move forward,” says Jen. “And I feel like I have to do something symbolic. … I like to buy people things. That’s how I show love. “

She sees buying snake rings as a symbol that every woman can shed her skin and be “a better person”. Stuart tells her that giving the housewives snake rings would be the wrong message, and Jen finally agrees. “I feel like I can’t give the girls a snake ring because there are some snakes in the group, OK?”

She eventually chooses snowflake necklaces, fascinated by the thought that no two snowflakes are alike. “I mean, look at us as a group. We are so different. We have Jews. We have Mormons, Pentecostal Muslims, Catholics. Despite all our different personalities, we come together and make something beautiful out of it. “

There are many things that can be said about RHOSLC, but doing something beautiful together is not one of them.

Heather talks about sex with her eldest daughter

Heather Gay’s eldest daughter Ashley has limited her college choices to UC-Santa Barbara and San Diego State – both of which are known as party schools.

“I feel like I’m living vicariously through you,” says Heather, “because when I was in college I just wanted to get an education, get married and have kids.” (She went to Brigham Young University.)

And Heather adds that her parents never talked to her about sex. Heather tries to have this conversation with Ashley.

“I want you to know when a man and a woman love each other very, very much,” says Heather – then bursts into giggles and covers her face. She eventually warns Ashley that the world can be “pretty dissolute” and about using condoms. “Don’t get pregnant. Don’t get sick. Loving You.”

Jen tries to bond with her younger son

University of Utah assistant football coach Sharrieff Shah and his 16-year-old son Omar are in training when Jen shows up and announces that she will be volunteering at Omar’s school. Omar is obviously not happy when his mother suggests that she meet his friends and “fix the connection between the two of us.”

“But I’m not telling the truth,” replies Omar.

Sharrieff tries to moderate, but it’s clear that Omar doesn’t want his mom to take him to school and pick him up from school, hang around him and – gasp! – decorate his locker.

“You see, that’s too much,” says Sharrieff. “Nobody wants that.”

NO WORKOUTS • You might think Lisa is training all the time. But no. “You can tell I haven’t trained in nine years, right?” Lisa tells Whitney and the trainer at Onyx Pole and Aerial Fitness Studio. “The last workout I had was labor.”

GOOD GENES • When Jennie says her husband Duy is “over fifty,” Lisa says, “He looks so young.” Jennie replies, “It’s the Asian.”

BLACK PEOPLE DON’T SKI? • Mary invites Meredith to play tennis with her at the Rise Athletic Club in North Salt Lake when she isn’t actually playing the game. Mary thinks the baseline is the “safety line”. But she has a cute tennis outfit.

“To be honest, I think Mary came up with tennis because she had the cute Tom Brown look for it and wanted to wear it,” says Meredith. It’s not really an insult because it’s true. “I did it for the outfit,” admits Mary.

Mary also says that she is not a skier. “You know, black people don’t ski. … It’s true, ”she says, comparing black people skiing to“ looking at a mountain trying to find chocolate chips. You won’t find it. “