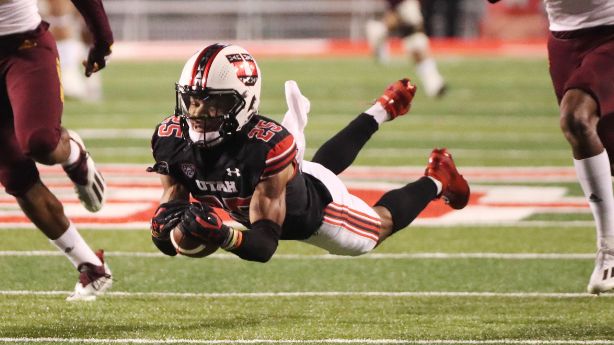 SALT LAKE CITY – With just under nine minutes to go in the third quarter, Utah receiver Britain Covey escaped on the sidelines and jumped within the Arizona State 5-yard line for a first down game.

The excitement of the play overwhelmed Covey and he leaned over to face the Arizona State defenders lying on the floor below. It wasn’t long before the referee standing next to him threw the yellow flag. Unsportsmanlike conduct: ridicule.

“Did he do that?” Utah head coach Kyle Whittingham quipped. “I thought he showed his helmet and showed how the Rogaine works.

“I didn’t realize it, but he apologized to the team afterwards,” he added. “This kid made game after game. I also love Britain Covey and its competitive spirit.”

The penalty had the potential to violate a much-needed drive in Utah, but quarterback Cam Rising linked up with Brant Kuithe in the ensuing game for a 20-yard touchdown strike to erase an Arizona state lead that was in the first half felt insurmountable. With the touchdown, Utah ended the game after a 21-7 deficit at half-time.

“We just got together in the locker room and pretty much just talked about knowing what to do. It’s not something we’re running from. We have to attack this thing,” Rising said. “And we just talked about it and the defense did a great job and enabled us to continue to be accurate.”

And the Utes weren’t done scoring yet.

Overall, Rising led the Utes in the second half with 28 unanswered points to beat Arizona State No. 18 35:21 at home in front of an announced crowd of 51,724 fans.

The win puts Utah (4-2, 3-0) in the driver’s seat for the Pac-12 South title, making them the only undefeated team in conference play.

Rising shook off a poor performance in the first half that included two interceptions and multiple drops from receivers to breathe life into the Utes in the second half.

The native Californian finished the game with 247 yards and two touchdowns after 21 of 33 passing games to victory. He also added 59 yards on the ground, including a 9-yard rushing touchdown in the first half, with six carries.

“It’s easy,” said Rising, speaking of his ability to recover from a poor first half. “I mean, I just lean on my teammates and they’ll take me back to where I need to be and make sure I’m able to make sure this offensive goes in the direction we need to go. ” . “

Arizona State (5-2, 3-1) quarterback Jayden Daniels, who made his second appearance at Rice Eccles since a 25-yard passing game in his first season, threw the Utes in the first half for 14 points lead into halftime. Put simply, there was little Utah could do to stop the Arizona State attack.

The Sun Devils opened the game in search of early dominance with a drive that drove Utah around and set the tone for half. Daniels orchestrated a 12-play, 75-yard drive that ended when he hooked up with Jaylin Conyers for a 7-yard touchdown strike. And the races started … or so it seemed.

Daniels was kept in check in the second half, finishing the throw for 237 yards and two touchdowns after a 20-of-31 pass in loss. The San Bernardino, Calif. Junior added 32 yards on the ground, including a 2-yard rushing score that triggered a 14-0 run in the second quarter to give the Sun Devils the lead at halftime.

But Utah’s defense increased the intensity in the second half, keeping the state of Arizona to just 97 yards of offensive and zero points. The most noticeable sign of Utah’s dominance was in the closing seconds of the game when the defense, led by Devin Lloyd, sacked Daniels on three straight holdings for a total of 30 yards to end the game.

“We’re just proud that we’re done, and that’s a cornerstone of this program,” said Lloyd of the last series. “As Cam said, we got together for the entire second half and just counted on us to finish games, finish drives. I think it’s safe to say we did.”

Utah received some help from an Arizona state team that was penalized 13 yards for a total of 115 yards on Saturday night.

“I can’t tell you how rewarding it is and how much our players deserve it,” Whittingham said of the win after his team had a changed week when the team attended Aaron Lowe’s funeral on Monday. “They had a great week of training and it has to be in the top 10 wins since I’ve been here for satisfactory wins – proud of the team.”