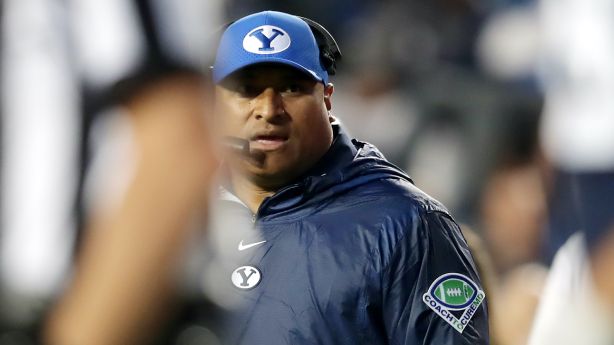 Was BYU’s defense against South Florida as bad as it seemed? Yes, but Sitake thinks it’s “repairable”

PROVO – BYU coach Kalani Sitake wasn’t too happy with his team’s defensive performance, particularly in the second half, Saturday’s 35:28 win over South Florida, which helped the Cougars take two spots in the latest Associated Press Top 25 .

With the Bulls held at 153 yards and six points on the way to a 28-6 half-time advantage, there is little doubt that the Cougars (4-0) took their foot off the gas. USF (1-3) finished the game 367 yards offense, 23 first downs, and 35 minutes in possession when they reduced the three-score game to one.

And while Sitake paid tribute to South Florida coach Jeff Scott and freshman quarterback Timmy McClain for completing 17 of 24 passes for 186 yards and running 59 more, he didn’t hold back his displeasure with his own defense.

“I felt like the offensive came to play. The defensive was pretty good in the first half and we just have to find ways to play,” said Sitake after the game. “I thought USF did some really good things. I can’t believe their quarterback is just a young freshman.

“They played a few games and we didn’t do enough in defense in the second half. But we have to find a way to make them more automatic and get points on the board. Fortunately, we won.”

A day later, after taking Sunday off, as BYU traditionally does as the flagship institution of The Church of Jesus Christ of Latter-day Saints, Sitake was still “disappointed” with what he called many “very repairable things” “Mostly referred to as young people, players see some of their first reps in a live game.

Defensive coordinator Ilaisa Tuiaki agreed, saying that the starters – even if they were not in the line-up without defensive linemen Atunaisa Mahe and Tyler Batty and cornerback Isaiah Herron – largely held their own, as the first half showed.

The further the BYU went down the depth table, the more pronounced the problems became – most of them came back to the players trying to make too many games while not fully covering their own task. Injuries certainly played a role, but most of the problems stemmed from new players receiving a baptism of fire against USF’s Uptempo Offensive and mobile quarterback.

“Some of the little kids there made little mistakes,” Tuiaki said during his weekly coaching show in the Coordinators’ Corner. “If we look back, I have to remind myself that even people like Khyiris (Tonga, who is now with the Chicago Bears) once made mistakes that these young people are making now. It’s all about doing more repetitions to be able to coach. ” them up and get better. There were so many young players. “

This youth and inexperience caught up with the Cougars in their first game against a non-Power Five opponent of the year.

“They got us down and showed some good things from their players and the coaching staff. But we have to find a way to get off the field,” added Tuiaki. “It felt like there were a lot of thirds and ones and thirds and shorts and fourth downs and we let them keep going.”

BYU needs to improve rapidly against one of the country’s top felons ahead of the Utah state street kick-off on Friday night (7 p.m. MT, CBS Sports Network).

The Aggies boast of being the country’s No. 13 pass offensive at 319.8 yards per game, and 25th in rushing at 213.5 yards per game with an up-tempo system similar to that in South Florida for parts of their own game is similar.

Individually, wide receiver Deven Thompkins led the nation in receiving, but fell in third place with 128.5 yards per game to the eleventh-best reception per game of 7.2.

Sitake said it was “very doubtful” that Caleb Christensen – a Sky View product that played cornerback and was the team’s best kick-returner – will play against his former home team.

“It’s sad because he’s from this area and looked forward to going home and playing in front of his friends and family,” said Sitake.

The manager is more confident Herron will be available after missing USF last week. Tuiaki too.

Herron is listed on the Cougars’ depth table with D’Angelo Mandell as the starting cornerback for Friday’s game, with Shamon Willis, Kaleb Hayes and Jaylon Vickers as backups.

In Christensen’s absence, running back Lopini Katoa will be BYU’s best kick-returner, with Javelle Brown as a backup.

Tuiaki also confirmed that both Mahe and Batty will be available on Friday. He added that the two defensive linemen were healthy on Saturday but hadn’t exercised all week and “to protect them from themselves,” which likely led to the 6-out-of-15 third-down conversion rate and 4-of the bull contributed -5 conversions on the fourth down.

“We’ll at least be on the D-Line at full speed,” said Tuiaki.

Sitake said quarterback Jaren Hall, who spent our Saturday with a rib injury, will be returning to practice on Monday in hopes of starting Friday night. But he also warned that a final decision on starting quarterback would not be made for a few days of practice, a challenge made even more tricky by the short week.

Offensive coordinator Aaron Roderick “hopes to find out more about the quarterback situation by late Monday,” but believes the decision could drag on until Tuesday afternoon as he decides between Hall and backup Baylor Romney.

Romney tossed 305 yards and three touchdowns, adding 20 yards on the ground in his first start of the year for the Cougars, including a 47-yard strike against younger brother Gunner Romney in the third quarter to help BYU take off for good the disadvantage of ownership.

“We could use them both,” said Roderick. “Who knows?”

The afternoon kick is coming

The cougars won’t go back to work late at night.

After traveling to Maverik Stadium on Friday evening, BYU will host Boise State on Saturday, October 9th at 1:30 p.m. MT. The game will be broadcast on either ABC or ESPN, the network said on Monday.

The Cougars opened the season with four kickoffs in a row in the 8 p.m. MT window, including three in a row around 8:15 p.m. MT in their favorite opening set. Next weekend’s game will be a welcome relief for fans staying until the end of the fourth quarter (not to mention sports journalists whose business they keep in Provo is exhausted well after midnight oil).

It will also be the Cougars’ first afternoon home game against the state of Idaho since November 16, 2019, and the first on national television since hosting what was then No. 21 Washington at 1:30 p.m. MT on ABC on September 21, 2019. BYU played in seven late-night games this season, but three of them were on the way (BYU also played Coastal Carolina at 3:30 p.m.). MT game last season, but that game – which was scheduled with about three days notice – was previously scheduled for the 5:30 p.m. ET time slot on ESPNU).

Wildfire Smoke Is Here to Stay. Here’s How to Clean the Air Inside Your Home.