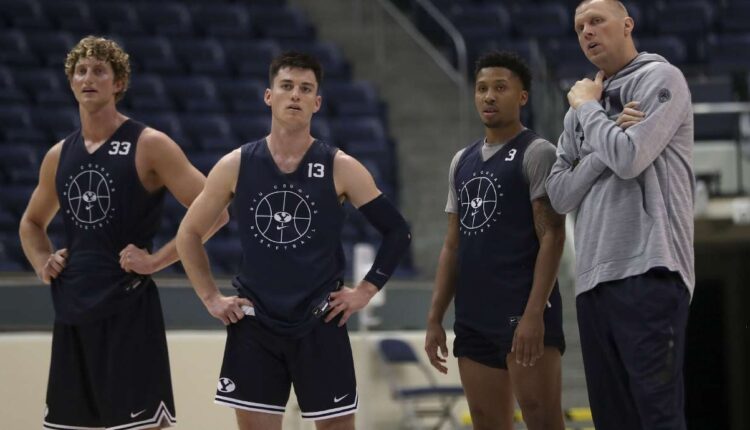 PROVO – One after the other came, slowly at first and finally as a small crowd.

They gathered together, but also alone, and waited at Provo Airport in the middle of the night to catch a glimpse of the returning heroes.

When the BYU men’s basketball team returned home shortly after 1 a.m. MT after an 81-49 dismantling of No. 12 Oregon at the Moda Center in Portland, they waited: several dozen BYU fans lined the street in front of the small regional airport to greet them the cougars home like a band of returning mercenaries.

Mission accomplished; Now let’s get back to work, everyone seemed to be saying as they dispersed into the wind before 2 a.m., with only the faint echo of the BYU battle song sung by a student blowing the wind off the shore of Utah Lake captured.

Mark Pope continued to do wonders with the BYU basketball program on Tuesday night. But this miracle wasn’t Alex Barcello, who scored an almost perfect 25 points in the 9-of-11 shooting that led the Cougars to their first NCAA tournament in five years, or even won over players like Te’Jon Lucas, Seneca Knight or Matt Haarms in front of them to move to the Provo campus.

This miracle was different because in a sport desperately lacking in relevance for all months outside of March – perhaps February for the most elite teams and conferences – Pope had seemingly done the impossible.

He made BYU basketball relevant in November.

“It was great to see you guys at the airport,” Lucas tweeted at the Roar of Cougars student division at BYU hours after scoring 12 points with three assists against the Ducks. “I love you, support!”

Gavin Baxter, whose emotional recovery from two end-of-season injuries continued Tuesday night with his best ever game from BYU’s 3-0 start, added, “The ROC is crazy to show up at 2 a.m., I know you guys everyone has class in the morning. “

The Cougars picked up exactly where they left off last year, only better. Rather than wither under a Pac-12 team that advanced to the Final Four – and one in second place in the recent Associated Press Top 25, just behind Gonzaga – at UCLA, BYU went with another Pac-12 performance. Then the cougars stepped on that toe.

Oregon finished second in the Pac-12 last season and established its national top-15 position with double-digit wins over Texas Southern and SMU. But BYU made the Ducks look early and often mortal, jumping out 16-6, 37-18 and 52-29 before heading to a 32-point win.

That’s not to say the Ducks are outright cheats or that Dana Altman isn’t a great coach. Oregon was caught simply clueless, flattened, and unprepared to borrow a word the 41-year-old college coach used at a win rate of 0.662.

“We have so much respect for this team and this program,” said Pope during his post-game show on BYU radio. “When I was here as an assistant, we lost to them in a single game. I understand how good this team is.

“We knew we had a lot of work to do. We knew this would test our defensive principles and on the glass like our boys have not been tested this season. So I’m super proud of our performance.”

The Cougars have taken on an incredibly difficult task – opening it up with three returning NCAA tournament teams, the first time BYU has attempted such a feat since arriving at the Great Alaska Shootout for the opening of the 1994-95 season – and made it look easy.

Okay, maybe not easy. But in sending Cleveland State (No. 15 Seed), gaining the trust of four-star prospect Collin Chandler, defending San Diego State (No. 6), and dealing with Oregon (No. 7) – a team that made last year’s Sweet Sixteen – the Cougars have shown that they are part of the nation’s elite.

“I think every win means a lot to us,” said Barcello. “Of course this was a high-level team, lots of talented guys. So this is definitely a big win for us.

“A 3-0 start to the season is probably what we all wanted a few months ago. We’ll enjoy the night, it’s a really big win for us, we’re happy for us, it was a great one Scout “. Now let’s move on to the next game. “

BYU’s win is just the latest in a phenomenal start for the West Coast Conference, led by No. 1 Gonzaga with 86:74 against No. 5 Texas on their way to their own 3-0 start. Saint Mary’s are also 3-0 and San Francisco moved up 4-0 that season.

Santa Clara went undefeated with a 22-point win over Nevada four days after throttling Stanford 88-72. Four WCC teams are in KenPom’s top 50, led by No. 1 Gonzaga and No. 20 BYU, followed by USF (32) and Saint Mary’s (41) not far behind. It is enough to place the West Coast Conference at number 7 by KenPom, just outside the Power Five + Big East, ahead of the American, Mountain West and Atlantic 10 conferences.

Oregon is unlikely to be number 12 on the AP Top 25 next week, almost as sure as BYU – which received 26 votes on Monday – will be somewhere in the picture, maybe as high as the mid-teens.

But as big as the first three games were, it’s still only three games. Pope made BYU basketball relevant in November, but the real goal is to be relevant year-round, and more importantly, March (and April).

In the last year of the AB era – this is Alex Barcello, not a modified version of anno domini – the Cougars began to talk about championships, about competitions, about Sweet Sixteens and Final Fours. There is still a long way to go before then.

But BYU has taken the first step towards these goals. The next is Saturday against NAIA Central Methodist (7 p.m. MT, BYUtv).

“You will hear all the noise. But I think the boys are having a lot of fun,” said Pope. “I think our boys are just excited to come home and go back to work because we think we can be a really good team.”