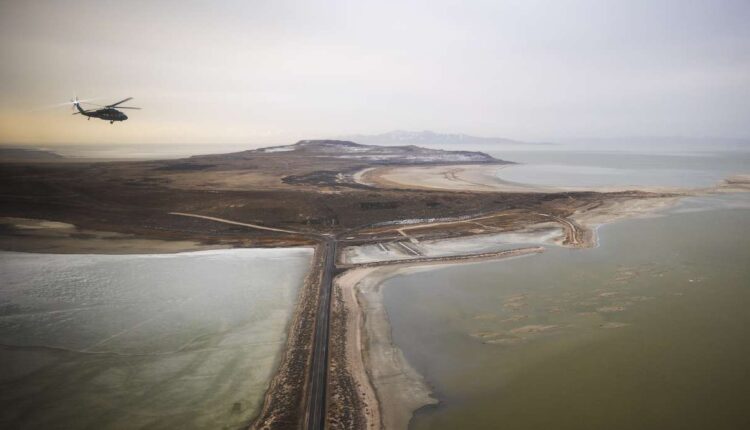 SALT LAKE CITY — Laura Vernon was preparing for a news interview last summer when her mother asked what the interview was about.

Vernon, the Great Salt Lake coordinator for the Utah Division of Forestry, Fire and State Lands, explained that it had to do with the Great Salt Lake, which had officially hit a new record low, on Pioneer Day of all days. Lake levels date back to the arrival of the pioneer settlers in 1847.

“She looked at me and she said, ‘I had no idea the Great Salt Lake was in so much trouble,'” she recalled, of the interaction. “And I thought: Well, my own mom doesn’t know … there’s room for improvement for the Great Salt Lake.”

And after a less-than-stellar snow collection season, she told members of the Salt Lake County Council on Tuesday that the state now projects the lake will hit a new record low again this year, about 2 feet below the most recent record low of 4,190.2 feet on Oct. 18, 2021.

The projection is based on levels that flow into the lake from its core tributes, like the Bear, Weber and Jordan rivers. Normally those rivers add about 3 feet of water during the irrigation offseason, while there’s a 2-foot reduction once the irrigation begins. That’s a net gain of about a foot per year.

But this year’s spring runoff is not looking good for the lake. The National Weather Service’s Colorado Basin River Forecast Center announced last week that it adjusted its forecast to project a runoff at 60% of normal. It previously forecast a normal runoff at the start of the year.

Beyond that, there wasn’t much growth for the lake when people weren’t using water for their lawns or agriculture.

“This past year, with the horrible drought conditions, the lake only went up 6 inches,” Vernon said, during a presentation about the lake that was part of the council’s ongoing water summit series. “We’re hopeful it will go up more than that this year, but we’ll have to wait and see.”

That, she adds, has potentially dire consequences for the economic and environmental importance of the Great Salt Lake, which contributes more than $1.3 billion and 7,700 jobs in local economic benefits annually, and benefits the state’s ecology.

Her presentation appeared to resonate with members of the Salt Lake County Council, who offered more comments than questions after she concluded her 25-minute presentation.

“I can’t think of a greater environmental disaster looming on the horizon than the drying up of the Great Salt Lake,” said Councilman Richard Snelgrove. “If the Great Salt Lake goes the way of the Aral Sea, the results will be catastrophic not only for Salt Lake but the Wasatch Front and for Utah.”

The Great Salt Lake means a great deal to several industries and species.

The lake is home to an estimated 10 million migratory birds every year, as the area around it constitutes about four-fifths of the state’s wetlands. It’s a vital refueling area for the birds traveling up and down the continent during migration season. With other parts of the West also drying out, Vernon said there are fewer areas for these birds to continue on their journey.

There are also economic benefits from outdoor recreation on and around the lake.

If the lake dries up, that’s bad news for the birds and business. Vernon explained the economic costs of the lake drying up another 10 feet from now range between $1.69 billion to $2.17 billion, including $1.3 billion from lost mineral extraction, $81 million in lost recreation, and $67 million from the lost brine shrimp industry. It could also cost up to a half-billion dollars in environmental and health costs associated with more dust in the area because even a decrease of about 8 feet can result in 30 miles of newly exposed lakebed.

Some of the businesses that rely on the Great Salt Lake are already feeling the pinch as the lake levels subside. More than 100 boats have been pulled out from the Great Salt Lake Marina over the past year, and it’s become increasingly difficult to get search and rescue boats out onto the lake because of its low water levels.

The mineral industries are starting to be worried about the lake levels, Vernon added.

Take the brine shrimp industry, for example. This winter’s harvest ended up close to normal, but those in the industry are starting to question how long a normal harvest will last.

Vernon admits there’s no silver bullet to reverse trends and cure the lake; it’s going to take collaboration from many people and entities.

Water conservation is a good start. Billions of gallons of water were conserved last year, according to state officials. gov. Spencer Cox issued an emergency drought declaration this year that aims to conserve billions of more gallons.

State agencies are finding ways to better plan out water use for every new project, Vernon added. The Utah Legislature also passed a few bills that help lake flow, including new access to water rights, more secondary metering to better understand how water is currently being used, and tens of millions of dollars for the Great Salt Lake habitat restoration alone.

Members of the Salt Lake County Council said there’s plenty more that needs to happen, whether it’s on a state or countywide scale. Snelgrove said every possible solution has to be considered when it comes to the Great Salt Lake.

Councilman Jim Bradley added there are plenty of water uses that the county should reassess, pointing to the cost and benefit of agriculture and its relation to water use in the state.

“There is a difference between a cycle and a trend,” he said. “We can cycle … but the trend is down. It’s not jumping around. It’s getting worse and worse over time. You can have a good (water) year or a bad one but it’s heading down. That we’ve got to remember — climate change is a disaster to everything we want.”

Call It ‘Mexicare’: Fed Up With High Medical Bills, a Family Crosses the Border for Health Care