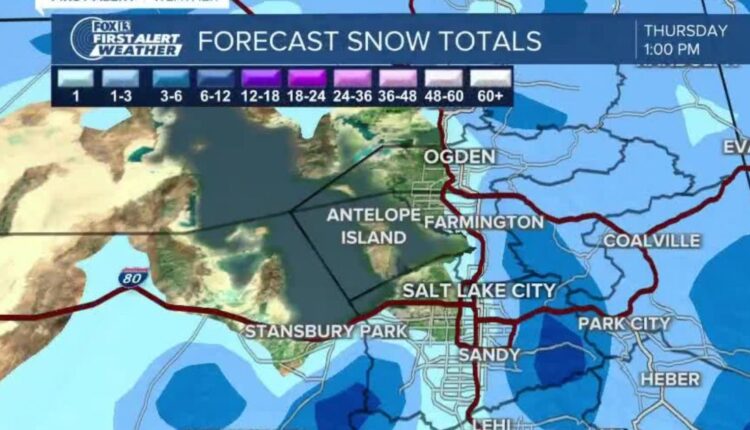 SALT LAKE CITY – Get ready for the onset of winter as a strong storm system sweeps over most of Utah that will hit the state by Wednesday morning. Heavy snow had already been seen in Little Cottonwood Canyon when the sun set on Monday.

Clouds and wind will increase throughout Monday, with valley rains and mountain snow showers developing in the afternoon and intensifying in the evening.

Snow accumulation could reach up to 20 inches in the mountains, according to the National Weather Service, with snow continuing to fall in the central mountains on Tuesday morning and sporadic snow in the northern mountains on Wednesday.

The best chance of accumulating valley snow will be in central and southern Utah on Tuesday. Parts of Corridors I-15 and I-70 in these areas are expected to have winter driving conditions as well as mountain roads for most of Utah. #utwx #wywx pic.twitter.com/LfwokeEkAh

During the surveillance, winter driving conditions are expected on most mountain routes.

Late Monday morning the NWS registered wind gusts of up to 40 miles per hour behind the front on I-80 from Wendover to Grantsville.

Rain is expected to plague commuter traffic in key areas of the state on Tuesday morning, with rain turning to snow along the I-15 corridor between Nephi and Cedar City.

Click here for the latest NWS clocks and warnings.