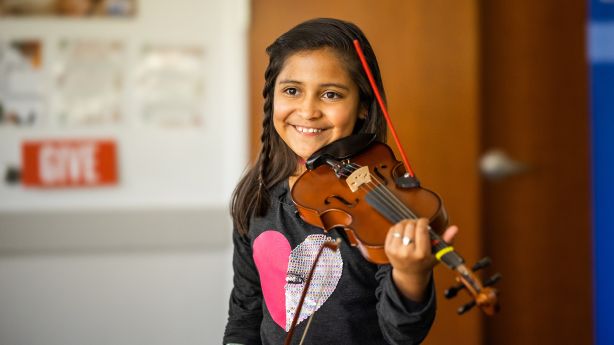 Adia Cardona, a 10-year-old with a prosthetic arm, poses for a portrait with her violin. An engineering student at Brigham Young University helped her realize her musical dreams by developing a device that would prevent her bow from slipping off the violin. (Ryan Campbell, BYU)

PROVO – A 10-year-old Provo girl with the music virus cannot be held back with just one hand.

“I love the violin because it is a part of me, it relaxes. I just get the violin or the piano and play one of my favorite songs, ”says Adia Cardona.

Adia, who was born with one arm, received a prosthetic arm a few years ago from the Shriners Hospital for Children that was specially designed for violin playing. It connects to her arch and allows her the movement that would be done by the elbow and wrist. But there was one problem – she couldn’t apply enough pressure to control her bow and keep it from sliding over the strings.

A few weeks after taking lessons from Madilyn Olsen at Americorps and United Way, Adia approached her teacher with a sketch of a device she thought might help.

“She’s a determined and zestful girl, and she just wants to experience everything she can, and I think she always wanted to be able to play the violin,” said Olsen. “She loves music – you can tell she loves music so much – and she didn’t want to let that hold her back. And it’s just who she is, go forward and take control of her life and situations, and don’t let anything stop you. “

But the violin teacher didn’t know how to make the sketch come true, so she turned to Brigham Young University’s College of Engineering and a local nonprofit that makes prostheses for help.

This is where engineering student Joshua Vanderpool, who volunteers with 2ft prosthetics, came into play.

After meeting Olsen, Vanderpool went to one of Adia’s violin lessons with prototypes in tow. Eventually he found a way to position the chopsticks on the violin so that it wouldn’t interfere with your playing but would help you control the bow’s slide.

“He paid attention to details and really helped Adia feel like this was her project … She was also very involved and he made it her favorite color, pink,” said Olsen.

Vanderpool bought supplies, went to BYU, and used one of the university’s 3D printers to design a device that could be attached to Adia’s violin. Then he met with Olsen and set the device so that Adia could put it on the violin herself.

“I think we were all so eager for this to be done and kind of expected it, so we were all a little nervous, but she was so excited and there was a night-and-day difference in the sound of the song, that she played. And you could just say there was relief because she couldn’t just focus on learning the music, but could focus on enjoying that moment with her violin instead of stressing out about all of these other factors. “, Olsen recalled.

Vanderpool said he was interested in making prosthetic limbs because they can have any impact on a recipient’s life.

While the device is simple to Adia’s violin, “it has made so much of a difference in someone’s life, simple things we can do every day to change someone’s life. And I think that’s something the world needs so badly right now, “said Olsen.

In a video shared by BYU, Adia said that when she first started using the attachment, “I just thought, ‘Wow, just’.”

“Music makes me happy because it’s a part of me,” said Adia. “Thanks to Joshua, I can play more easily and just keep playing what I like. Engineers are great and great because they can make people happy.”

Since then, Vanderpool has been able to see Adia play the violin with the device he made especially for her.

“I think it’s wonderful because here she’s the determination and I just gave her one tool so she can accomplish what she wanted,” he said. “It was great to see how she enjoys smiling and seeing some of the frustration go away.”