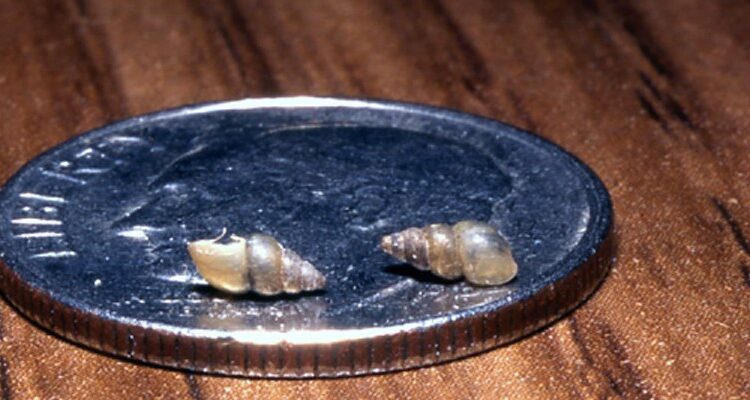 (Green River, WY) 一 The Wyoming Game and Fish Department has confirmed the presence of two invasive water species in the Flaming Gorge Reservoir: curly pondweed and New Zealand mud snails. Both types of AIS have been found in Wyoming, but this is the first time New Zealand mud snails have been documented over the Flaming Gorge Dam. Game and fish AIS staff were able to confirm their presence following information from the public.

In mid-June, an angler reported a sighting of pondweed at the reservoir south of the Anvil Draw jetty. Subsequently, while fishing from a boat, the same angler spotted another clump of pondweed floating on the south end of Big Bend. The investigation found more curly pondweed and mud snails north of the Brinegars Ferry jetty.

“We are disappointed to discover the presence of pondweed and mud snails in the Flaming Gorge,” said Robb Keith, Green River regional fisheries overseer. “This discovery illustrates the need for the diligence of all vessel users to stop at AIS control stations and follow cleaning, draining and drying procedures to prevent all AIS, including those already found in Wyoming, from spreading.”

Although historical records show that curly pondweed was discovered in the Flaming Gorge Reservoir in 1979 and 1980, subsequent research had not yet discovered the plant. Keith said he was grateful to the public for reporting their sightings.

“Thanks for all reports on AIS sightings. These tips are critical to our AIS response. With this information, we are able to act quickly to verify the presence of AIS in order to contain the spread, ”said Keith.

There are currently no changes for boaters or other water users. To limit the spread of these invasive water species, Game and Fish urges recreational athletes to clean, drain, and dry their watercraft after each use and to take an extra minute to ensure they have no vegetation or debris on their watercraft, their equipment or. transport trailers. Boaters are reminded that game and fishing regulations require the immediate removal of all visible vegetation from vessels and trailers when leaving this state’s waters.

“Because they reproduce asexually, these slugs can easily spread and spawn a new population,” says Eric Hansen, Green River AIS specialist. “They seal themselves in, allowing them to survive for long periods out of the water or even through the digestive systems of birds and fish.”

Game and Fish will continue to monitor these occurrences and determine how widespread the populations of these AIS are within the Flaming Gorge Reservoir and surrounding areas.

KHN’s ‘What the Health?’: The Senate Acts