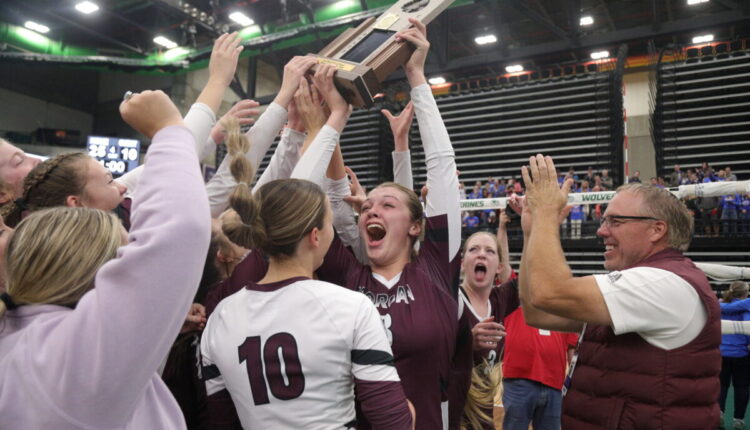 3 thoughts on the volleyball season: Morgan’s rarefied air, Weber’s late-season surges and why a 2023 outlook is cloudy | News, Sports, Jobs

Weber High’s Martina Borda-Bossana, left, and Bella Berensen, right, jump to block a shot during a 6A volleyball first-round playoff game against Westlake on Tuesday, Nov. 1, 2022.

Northridge High’s Bailee Tucker, left, and Elena Ady, right, jump to block a shot during a 5A volleyball state tournament quarterfinal against Timpview on Thursday, Nov. 3, 2022, at Utah Valley University.

Weber High’s Martina Borda-Bossana, left, and Bella Berensen, right, jump to block a shot during a 6A volleyball first-round playoff game against Westlake on Tuesday, Nov. 1, 2022.

Northridge High’s Bailee Tucker, left, and Elena Ady, right, jump to block a shot during a 5A volleyball state tournament quarterfinal against Timpview on Thursday, Nov. 3, 2022, at Utah Valley University.

The prep volleyball season concluded Saturday at the 6A/5A state championship tournaments. Here are three thoughts about the 2022 season.

A couple of weeks ago, the Morgan High volleyball team beat Richfield to win the 3A state championship and end a run of three straight title-game losses.

The win was an epic release for a senior class that had only known title-game heartbreak, and at the hands of Union High all three times.

“It’s amazing,” senior setter Timberlee Peterson, a three-year starter, said after the game. “(Three straight title-game losses) just lit a fire in us, and we went all out tonight and we weren’t going to lose.

This came in a year when Morgan changed offenses, going to two setters instead of its normal one, in an effort to get better blocking up, head coach Liz Wiscombe said in September after a five-set win at Ogden.

The win also had some historical implications to it.

The other 11 high school sports programs in Utah to hit said mark are:

Liz Wiscombe has coached 17 of Morgan’s 20 title-winning teams since her first title at MHS in 1989. The last time Morgan High volleyball didn’t play for a state championship was 2013.

The Trojans have won more region championships than can comfortably fit on one banner. The consistency across the decades, the changing landscape of high school sports and changes to how volleyball’s been played has been impressive to say the least.

The last two seasons, Weber High has surged late in the season. Last season, the Warriors won six of their final seven games and took sixth place at the 6A state tournament with a 15-17 overall record.

After the Ridgeline tournament from Sept. 9-10, the team’s second of the year, Weber had a 9-10 record. After the tournament, the warriors went 12-3. Two wins came against Davis, which finished second place in Region 1. Four wins came at the state tournament.

The reason for the late-season success? It differs by the team. Some teams get healthy in October, some teams change their lineups, and some teams commit to a process and don’t chase wins and losses in August and September.

The thing that pops out about Weber is it played a ton of volleyball, 120 sets to be exact, more than any other 6A team.

Of the Warriors’ 34 matches, eight were in a best-of-three set format instead of best-of-five. So of the remaining 26, they went to four sets 12 times and five sets six times.

The team set middle blocker Bella Berensen, the team’s best hitter percentage-wise at .306, more times per set on average from September-November than it did in August.

It also helped Weber that Fremont and Clearfield were down this year. Either way, the Warriors may be a group to keep an eye on in 2023.

Since this is a realignment year and the realignment process has changed slightly, it’s harder to forecast what the regions will look like next year and, as such, the region races.

Davis graduates Aubrey Nielson and Brinley Bush, his top two hitters, plus setter Aimee Larsen and libero Cambria White. The Darts should return middle blocker Loryn Helgesen, but the team may be younger and inexperienced next year.

Weber theoretically brings back three of his top four hitters — Havi Montano, Cami Cvitkovich and Jackie Craven — plus his leader in digs, Eden Jensen. The Warriors graduate setter Martina Borda-Bossana, but with enough experienced hitting returning, they could get rolling in the business end of the season again next year.

Farmington had balanced hitting this year but graduated from the most versatile player in the region, Sophie Wendt (she led the team in kills and assists). Fremont had three seniors among its top four hitters but stood to return most everyone else. Both teams could improve since they each had a new head coach this year.

Both Layton and Clearfield were young this year, had sophomore setters and seniors leading the teams in kills.

Those three are important players to replace, but sophomore Taylor Harvey (career hitting percentage of .423 with 500 kills and 165 blocks) should return, which should be a go-to option for whoever the new setter is.

Afer Bountiful, things get tricky. Northridge was senior heavy but seems to have a good thing going. Will Northridge even be in Region 5 next year, or will the school with 1,947 students (according to the state’s latest Oct. 1 enrollment counts) move back to 6A Region 1?

Will Roy move back to Region 5? The school is small enough to do so, according to state enrollment numbers.

Most of Bonneville’s hitters were young this year, but setter Peighton Summers graduates. Box Elder graduates five seniors. Things look much more open in Region 5 next year than they have been.

Region 13: Assuming this is the Morgan region ends up in post-realignment, then it’s Morgan’s region for the taking like always.

The Trojans should return middle hitter Alyvia Jaffa, outside hitter Gentry Criddle and setter Emma Thurston, who split time at setter this year when MHS changed its offense.

Ogden may have a new look to it as its successful four-person senior class graduates. The Tigers should return setter Megan Aardema, middle blocker Ella Tuttle and right-side hitter Audrey Wangsgard.

Whether Ogden, Ben Lomond and Layton Christian are with the Trojans in the same region is unclear. Ogden and Ben Lomond could stay in 3A, since they both typically have an enrollment of 50% free-and-reduced-lunch students, or could be forced back up to 4A as part of a third 4A region.

1 killed in head-on crash near Naples in Uintah County

Listen: With Abortion Rights on the Ballot in Michigan, Women Tell Their Stories