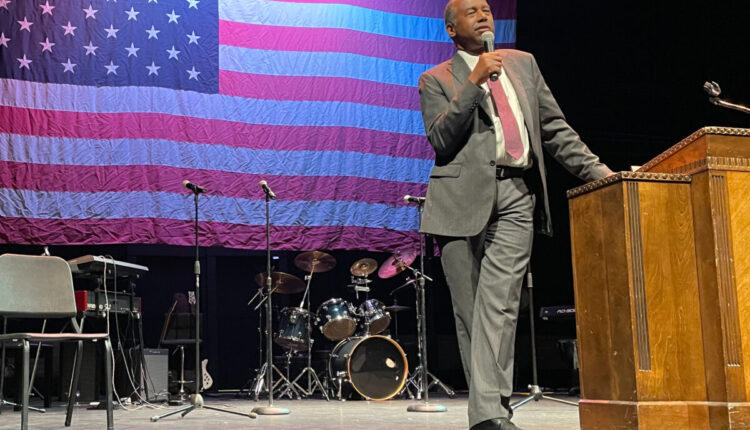 Ben Carson, the former US secretary of housing and urban development under President Donald Trump, speaks Saturday, Oct. 22, 2022, at Ogden High School. He was invited by the Weber County Republican Party.

Ben Carson, the former US secretary of housing and urban development under President Donald Trump, converses with Utah Senate President Stuart Adams, left, and US Sen. Mike Lee before his presentation Saturday, Oct. 22, 2022, at Ogden High School. Carson was invited by the Weber County Republican Party.

Ben Carson, the former US secretary of housing and urban development under President Donald Trump, speaks Saturday, Oct. 22, 2022, at Ogden High School. He was invited by the Weber County Republican Party.

Ben Carson, the former US secretary of housing and urban development under President Donald Trump, converses with Utah Senate President Stuart Adams, left, and US Sen. Mike Lee before his presentation Saturday, Oct. 22, 2022, at Ogden High School. Carson was invited by the Weber County Republican Party.

OGDEN — Ben Carson visited Ogden as Election Day looms with a dire message — the country is in a dangerous spot, with freedom of speech at risk, with communist ideology quietly seeing into the fabric of the government and education.

Since the signing of the US Declaration of Independence in 1776, successive generations have maintained the US republic, said Carson, speaking Saturday night. The streak, however, is now at risk, he claimed.

“We’ve kept (the republic) for 246 years. It is threatened more right now than it has ever been — World War I, World War II, the Civil War, all kinds of strife. This right now is the time when we’re at most peril,” said Carson. Invited to speak by the Weber County Republican Party, he’s a former GOP presidential aspirant and was the head of the US Department of Housing and Urban Development under President Donald Trump.

Carson touted US Sen. Mike Lee — the GOP incumbent locked in an intense reelection fight with independent challenger Evan McMullin. Hitting on some of the hot-button GOP issues, he also made a strong call to the Republican crowd to get involved politically, to help stop what he sees as the nation’s slide.

As a GOP event, there was no Democratic counterpoint to Carson’s remarks, which drew applause from the crowd throughout his presentation. Reached Monday, though, leaders from the Weber County and Utah Democratic parties offered a rebuke to Carson.

“I don’t think he knows what communism is. Most Democrats are capitalists,” said Carly Cassidy, who heads up the Weber County Democratic Party. She doesn’t see communism seeing into the nation’s education system or government.

“We encourage anyone who wants to see more common sense and less extremism in our government to join us and vote for the Democrats on their ballot this year,” Anderson said.

‘WE HAVE TO VOTE CORRECTLY’

Lee formally introduced Carson at Saturday’s event, held at Ogden High School, also hitting on the highlights of his campaign pitch. McMullin, though he calls himself independent, is really a Democrat, Lee charged, and the Democratic administration of President Joe Biden is to blame for inflation, which Lee says is the key campaign issue.

“Joe Biden’s America makes Americans poorer,” said Lee, who, in a lighter moment during his remarks, offered up his imitation of Trump. The way to counter Biden is to wrest control of the US Senate from Democrats by voting for GOPers like Lee and “return the control of the United States Senate over to the Republicans.”

Early on in his remarks, Carson warned that the freedom of speech is at risk due to rules and guidelines social media companies put on those who use their networks, abetted by the US government.

Arguing that communism is increasingly seeing into the US fabric, Carson alluded to comments he maintains that Nikita Khruschev, the Soviet premier from 1958-1964, made to then-US President Dwight Eisenhower. Communist adherents, according to the narrative Carson attributed to Khruschev, would somehow get control of the levers of US power and “indoctrinate kids” in schools, put their message out through the media and replace faith in God with faith in government. The government, under his dire vision, would increase spending as a means of wealth redistribution.

“Does any of that sound familiar? Those are the things that are happening in our society today. That’s why it’s so important that we put the right kind of people in office. If we don’t do that, this trend will continue,” Carson said. “We have to have people who actually understand what’s going on and we have to vote. We have to vote correctly.”

He also warned that what he sees as the nation’s slide also stems from what he views as a move away from traditional Judeo-Christian values ​​in the broader US society.

“We’ve got to understand our faith, our Judeo-Christian values, is what sets us apart from some of the other places, and as we’ve pulled away from those values, you see what’s happened to our country,” Carson said . “And we cannot submit to those people who tell us that we cannot maintain our faith in public. We can maintain it in private and public and everyplace we go because we should be one nation under God.”

Carson said the upcoming midterm elections, which culminate Nov. 8, and 2024 elections, the next presidential election year, will be key in addressing the issues he laid out.

“And we the people will make the decision, what kind of country we want to have. Nobody else can make that decision but us. But it means that we have to be extremely energetic, we have to use our spheres of influence to make sure everybody in that sphere understands,” Carson said. “We need to talk to each other.”