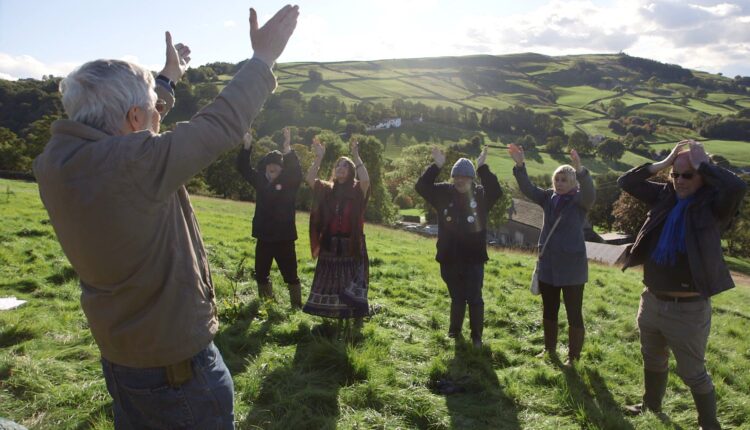 Bradford’s amateur filmmakers have been meeting for 90 years. Now they’re the stars

You do have to squint a little, but down a back alley to the south of Bradford city center is West Yorkshire’s own dream factory.

Somewhere behind the fly-tipped fridges and scrawled graffiti you’ll find Bradford Movie Makers. For close to 90 years, enthusiasts have been making and screening their own relentlessly imaginative no-budget films in the same building – a former hayloft that was converted into a private film theater in 1936.

Now they’re one of the last amateur film-making clubs of their kind, and the cameras have been turned on them for a funny, moving and deeply lovely documentary, A Bunch of Amateurs. The film’s promo tour will take the club to a special screening at the BFI Southbank. Joe Ogden, who’s been a part of the club for nearly three decades, can’t quite believe it. “When I see it up there, I’ll be like, ‘Wow, yeah, we’ve made it – that’s the real thing,'” he says.

The Facebook algorithms brought the club to the director Kim Hopkins’ attention in 2018. She saw a post by Ogden, now 59, describing his loneliness, and spotted that he was part of Bradford Movie Makers. Phil Wainman, one of the younger members at 49, became her way into the club.

Getting into the members’ homes and lives was less simple. Hopkins’ previous film, Voices of the Sea, followed a young woman in a remote Cuban fishing village as she attempted to escape to America. “Access was easier to communist Cuba than to Bradford Movie Makers,” she says.

Wainman was always philosophical. “We’re this little club that’s running out of money, and no one’s heard of us,” he says. “If they completely trash us, if we come out looking like complete idiots, we’ve not lost much – no one knows we exist anyway.”

Bradford Movie Makers was founded in 1932 as Bradford Cine Circle in one of the city’s barber’s shops (Photo: Supplied)

As things thawed, Hopkins captured tender, intimate moments: the rambunctious Harry Nicholls, 86, playing piano for his wife Mary, whose health is failing; the group’s longest-standing member, Colin Egglestone, who joined in 1973 and is now 90, carefully brushing his wife Shirley’s hair when he visits her in a dementia care home.

Jeanette Wilson, Ogden’s girlfriend, took some time to adjust to being filmed. “I wasn’t used to being in front of a camera and I’ve been struggling with it, really,” she says. “I’m getting there. Kim says you need to enjoy it and the more you enjoy it, the better you’ll feel. So I tried to do it that way.”

Wilson spent much of the recent screening at Sheffield Doc Fest craning around to see how the audience were reacting. She needn’t have worried. Her cheeriness has made her such a hit that a few fans followed her into the toilets after one recent screening, desperate to meet her. “That frightened me to death, that did,” she laughs.

Bradford Movie Makers was founded in 1932 as Bradford Cine Circle in one of the city’s barber’s shops. Back then, film-making was an expensive pursuit and the club was, Hopkins says, run by Bradford’s “movers and groovers”. In archive films, the club is packed. Stout men in dinner jackets and women in pearls applaud at a dinner, and the president hands out trophies at an awards evening.

By 2018 when Hopkins arrived, times had changed. She caught the club as it tried to scrape together its £300 a month rent – ​​which it had been behind on for five years – and stop itself folding.

By the time of the film, they’re down to a dozen or so members, most in their autumn years. Their film-making club is one of few survivors, says Ogden. When Leeds Movie Makers closed last year it was down to its last five members, one of whom was over 100 years old.

The film starts as an elegy, and turns into a celebration of the urge to create art for its own sake (Photo: Supplied)

“Leeds has gone now, Wakefield’s gone, Sheffield is still hanging on by a thread. Halifax have still got two members – they still meet up once a week to show each other their old films.”

When Hopkins first started filming, Bradford’s rickety headquarters had a hole in the roof and fly-tippers chucked fridges and cupboards into their driveway, while a series of break-ins forced the club to move its precious archive. These pieces of the city’s heritage, so old and fragile they couldn’t be risked on a projector anymore, slowly crumbled in members’ garages.

Even against that decrepit backdrop, though, the members’ films are wildly ambitious. A 1963 film telling of Boudicca’s legend attempted to show her final battle with Roman occupiers with four men in cloaks running slowly across a soggy field, while in a recent remake of the “Oh What a Beautiful Morning” sequence in Oklahoma!, Nicholls is transported via green screen from a slightly dingy back room of the club into elephant’s eye-high cornfields.

The gap between the film-makers’ gigantic dreams and what ends up on screen is frequently very, very funny. But A Bunch of Amateurs balances bathos with a genuine admiration for the members’ relentless creativity and love for film-making. It’s not just artistically vital either.

“Where social services has let us down, that club really has stepped in and done a job,” says Hopkins. She captures them bickering and snapping at each other occasionally, then slightly sheepishly making up. “They are really tight.”

A Bunch of Amateurs balances bathos with a genuine admiration for the members’ relentless creativity and love for film-making (Photo: Supplied)

Wainman is a full-time carer for his brother, and the club has long been his creative outlet. “I only get out one night a week,” he says. “We have a carer come on Monday night to help put my brother Chris to bed… I’d be pretty isolated without it.”

He isn’t the only one. Since filming, Nicholls has lost both Mary and his daughter, who was 52. “When the film was being shown and I saw Mary looking so ill, he [Wainman] put his hand on my arm and squeezed,” says Nicholls. “He has the empathy for me.”

Whatever happens, the group’s commitment to film-making is unwavering. Even when Egglestone fell and shattered his shoulder one night outside the club, he encouraged Hopkins to keep rolling despite the disapproval of the paramedics. “When Colin was put onto the stretcher, they said: ‘What’s that person filming for?'” Hopkins recalls. “And Colin said: ‘We’re a film club – we film everything.’”

Without giving anything away, the club gets its Hollywood ending. The documentary has been picked up by the BBC, and clubs from across Lancashire and Yorkshire visited for the club’s 90th anniversary party this summer. Its tumbledown building has been tidied up, and now there’s a studio, a scriptwriters’ group and a fully repaired stairlift on the go too.

“There was a point where we were worried that we were losing members,” says Wainman. “But we seem at the moment to be slowly gaining them.”

At the BFI, the group goes down a storm. Nicholls, a former magician, spends part of the Q&A doing card tricks. Egglestone shows off the rotation he can get with his new shoulder replacement. Ogden films everything. Wilson is enjoying her first trip to the capital at the age of 60. “I love it!” she tells the audience. “It’s just like you see on the telly.”

In the foyer afterwards, Wainman talks to a couple of men in their early twenties who want to get involved, while Hopkins gets Egglestone a half of lager. “It’s the pinnacle, the BFI, isn’t it?” says Ogden, slightly agog.

Even so, the group still want to do more. Hopkins says Wainman dreams of being a Hollywood scriptwriter, and Ogden has taken on his first feature-length project. The film starts as an elegy, and turns into a celebration of the urge to create art for its own sake. To Hopkins, Bradford Movie Makers are a joyful two fingers to the idea of ​​slowing down and growing up.

“We’re heading there, all of us,” she says. “And we want to know what it might be like when we get a bit older, what we’re going to be doing.

“Can we still be having some fun? Can we still be living, and not just working towards shuffling off this mortal coil? They certainly are making the most of their lot.”

A Bunch of Amateurs is in cinemas now

LGBTQ resource centers for Utah on hold due to funding issues