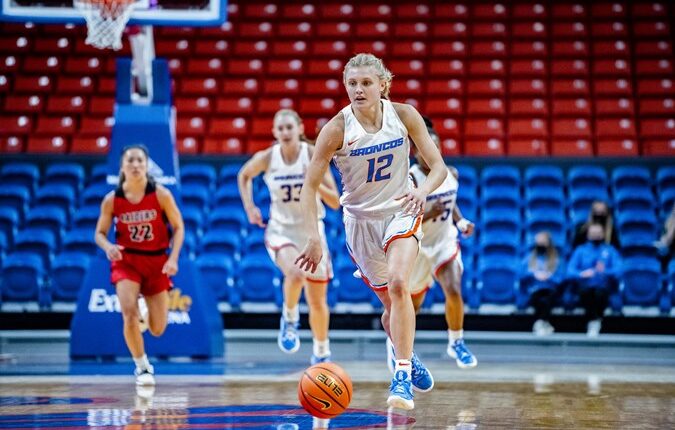 The loss dropped the Broncos to 1-2 while the Cougars improved to 4-0.

“We competed in the first half and we had our chances,” said Boise State Head Coach Gordy Presnell. “We did our things and got on the line. We just didn’t take any free throws. We just walked away in the second half.”

The Broncos took a 6-5 lead at the 6-51 mark in the first quarter on a Rachel Bowers jumper. The Cougars responded with a 17-3 run to take a 22-9 lead with 17 seconds in the quarter. Boise State then closed heavily with two free throws from Jayda Clark, followed by a Mary Kay Naro Steal and a summer beater jumper to bring the deficit down to 22-13.

In the second quarter, two Elodie Lalotte free throws drew the Broncos within 22-15 before the Cougars made a 7-0 run and took their biggest lead of the first half at 29-15 with 6:39 before half-time.

Boise State beat BYU 8-4 the remainder of the half, with Bowers adding two baskets to the 33-23 BYU result at half-time.

The teams traded points early in the third quarter before BYU took command with a 15-1 run to increase their lead to 53:29.

Lalotte finished a game with nine points for the Broncos and Naro posted eight career rebounds.

Boise State will be competing in the Rocky Mountain Hoops Classic November 26-27 in Boulder, Colorado. The Broncos open the tournament at 2pm on November 26th against Louisiana Tech.

SLC Mayor Mendenhall on Transgender Day of Remembrance: ‘our city is here for you’

If you love the outdoors in Utah, a pickup truck is the best bet for almost any activity