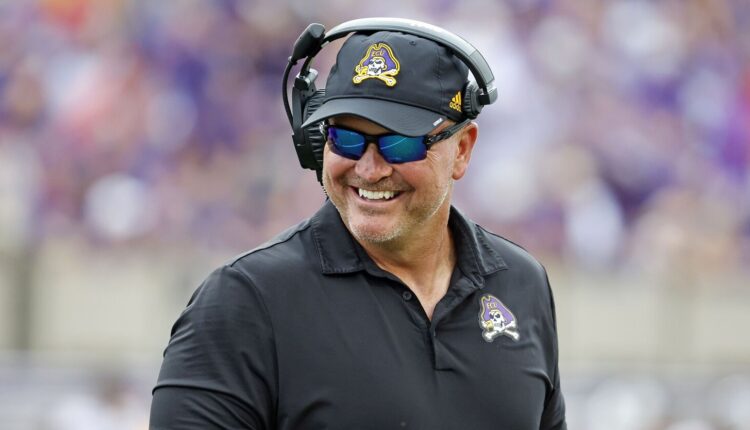 East Carolina coach Mike Houston, who won an FCS national title as James Madison’s coach in 2016, apparently hadn’t gotten around to watching film of BYU’s last three games when he met with reporters Monday morning to discuss the Pirates’ matchup on Friday with the Cougars at LaVell Edwards Stadium.

“This is going to be our toughest road test of the year Friday night. Our players know that, our coaches know that. They are very focused on that. I expect us to have a great week of preparation, and I expect us to go out and play at a very high level Friday night.” — East Carolina coach Mike Houston

“Very challenging environment in Provo, Utah, against an extremely talented Brigham Young team,” Houston said of the 6 pm kickoff that will be televised by ESPN2. “They are coming off a couple tough losses, but I do expect them to get a couple guys back this weekend. And I think (this will be) one of our stiffest challenges of the year, going on the road, trying to get a win this Friday night.”

The Pirates (5-3) walloped BYU 33-17 in Greenville, North Carolina, in 2017 behind quarterback Gardner Minshew, but Houston was at James Madison then. He took over at ECU in 2019. East Carolina has won two straight, beating Memphis in four overtimes two weeks ago and Big 12-bound Central Florida 34-13 last week.

“Our best performance of the year Saturday night,” Houston said of the win over UCF in front of a crowd of 38,245 at Dowdy-Ficken Stadium.

Of course, BYU has lost three straight, and has been absolutely pummeled by opposing offenses in its last two games. Maybe the film hasn’t made its way to Greenville.

After the win, the Pirates made a big deal of the fact that UCF is leaving their conference, the AAC, for the Big 12, and will quite likely play that up this week against also Big 12-bound BYU, although there isn’t the same level of angst involved because obviously the Cougars are not in their league.

Houston said ECU’s offensive coordinator, Donnie Kirkpatrick, was part of the coaching staff in 2015 when the Pirates traveled to Provo and lost 45-38 to BYU in what turned out to be coach Bronco Mendenhall’s final season at BYU.

“Coach Kirkpatrick has played in a night game out there when it is really rowdy,” Houston said, when asked about the noise that some 60,000 fans at LES will generate Friday. “Just over the years, we’ve done a pretty good job simulating that. It is the reason we do play the music at practice at a pretty high decibel level during team periods, because it forces the kids to play a high level without verbal communication. … It will be a challenge Friday night, but I think it is one our kids will be ready for.”

Here are more of Houston’s comments to reporters Monday

On BYU being nationally ranked a few weeks ago before losses to Notre Dame, Arkansas and Liberty

“No doubt, the quarterback (Jaren Hall), obviously highly touted and having a very solid year. A couple of his receivers have been in and out of the lineup. No. 12 (Puka Nacua) was back the last couple of weeks and that is a guy he feels very comfortable with and is a big-time playmaker.

“Defensively, big physical front. No. 92 (Tyler Batty) is a 6-5, 270-pound defensive lineman they play standing up a lot in some of their packages. … Just looking at them in total, they look like what you expect from a BYU team, when you think of BYU over the years.

“So I know they have dropped a couple of games, but they have got guys coming back that have been injured and I expect them to be able to play very, very well Friday night.”

On playing at the altitude in Provo (which is 4,551 feet above sea level)