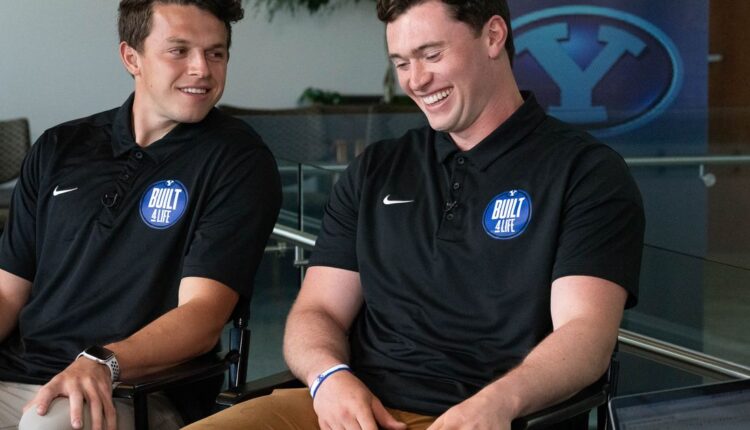 BYU football kicker Jake Oldroyd is looking to build on a solid campaign a season ago.

Once the Cougars got their season opener at Navy, Oldroyd told newcomer Ryan Rehkow that things would get better, training would be a lot easier, nerves would fade.

“There were just some of those little pieces of wisdom on the way that Jake definitely pointed out to me,” Rehkow said.

Oldroyd is listed as runner-up on the BYU list this fall. But the kicker, who turns 24 in January, offers the Cougars a big leg on the field and years of wisdom from it.

Oldroyd first came to Provo from North Texas in 2016 when he red shirted his freshman season and only played three games. Then the Carroll High School product went to serve a church mission.

Born in Texas, he rejoined the team in 2019 and has been a solid, productive part of the Cougars ever since.

However, Oldroyd said that each year of his career has been so different that he can divide each season because the program has gone through so many phases. In 2016 BYU had a new coaching staff.

“Fortunately, I was really lucky as Kalani [Sitake] and the new coaching staff came for the first year, ”said Oldroyd. “So the beginning of my career somehow coincided with hers. It was really fun to feel the energy of the fans and everyone. I had a great year this year. Now, after my mission, it was a great experience to master the challenges involved and to get used to the game again. “

In 2019, Oldroyd attempted to get rid of what Sitake commonly referred to as “missionary legs,” and in 2020 the Cougars tackled the pandemic while riding a wave of great success for the first time in more than a decade.

Oldroyd began his career in Provo with punts, field goals and point-after attempts. Last season, Oldroyd took on another big role with the Cougars. He processed 86 kickoffs – more than half of them touchbacks – and collected 5,116 yards on those kicks. The runner-up was a perfect 13 out of 13 on field goals, with the longest being 54 yards, scoring 60 out of 62 of his PATs, and Lou Groza being a semi-finalist.

And it seems that Oldroyd was able to produce a constant production and also play an additional role: mentor.

Last year Rehkow came to the Cougars as a player on the team. A native of Veradale, Washington, instantly connected with Oldroyd, who was helping the new kid on the block navigate not only through his first year but also through the pandemic.

“We point things out to one another. We know what the other has to do and we are only there to help each other implement it, ”said Rehkow.

Oldroyd said the relationship with Rehkov will continue to be the same as last year. The couple will complete all workouts, exercises and all work outside of the team workout together.

“I’ve played his position before,” said Oldroyd. “So we exchange a lot of information, coach each other and I think chemistry helps us to be successful.”

The main difference the couple will face from last season is the seeming return to normality in the football season.

The Cougars have not dealt with cancellations or major changes to their schedule, which is the toughest to date in the Independence era, and do not need to be tested for COVID-19 three times a week or deal with contact tracing if vaccinated said Carolyn Billings, director of sports medicine.

What Oldroyd is looking forward to most is having fans back in the stadium and having fan experiences again.

“We didn’t see nearly as much last year and we definitely miss it from the years before,” said Oldroyd. “It’s a completely different experience. Not playing in front of anyone feels like a glorified exercise in some ways. It’s so different to play before 60,000-100,000 [fans], but I definitely love having people there and you can feel the support of the fans behind you when you really need them. “