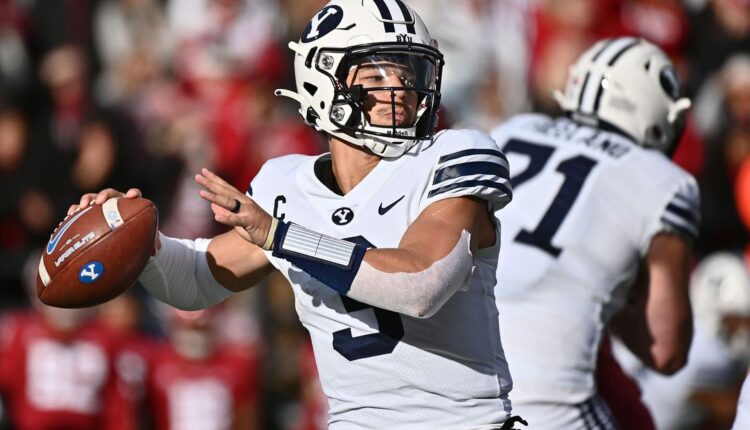 In the weeks leading up to fall camp, we will go through and preview each position group. First up, it’s the most important position on the field, the quarterbacks.

For the first time in several years, BYU basically knows who their starter will be before fall camp begins. When healthy, Hall is one of the best quarterbacks the Cougars have seen in their era of independence dating back to the 2011 season. He cemented his legacy when he helped BYU beat Utah for the first time in 12 years. He had three passing touchdowns and 92 yards rushing, doing a little bit of everything in the 26-17 victory over the Utes.

The name of the game for Hall is health. He missed three games last season including the Independence Bowl, which led to the Cougars dropping that game to UAB in disappointing fashion.

He finished the season with 2,583 passing yards, 20 passing touchdowns to just five interceptions and 307 rushing yards.

This season, he has his eyes set on playing a full season as the main man in Provo. With another year in Aaron Roderick’s system, Hall looks to take another step in his development. He will have plenty of opportunities to make a statement, given he will face the likes of Baylor, Oregon, Arkansas and Notre Dame.

Fans can breathe a sigh of relief, at least for now, with regards to the quarterback situation.

BYU will enter the season with three quarterbacks who have real-game experience, Conover being one of them. The former Elite 11 prospect turned down offers from Alabama and Ole Miss among others to come to Provo. He appeared in two games in 2021, being pressed into action against Utah State after Baylor Romney went down with an injury. He completed five of nine passes for 45 yards.

Given his status as a highly touted prospect, he’s a solid option as a backup quarterback. It’s safe to assume that if little changes over the next year, he could be heir-apparent to Hall as the starter for 2023.

If this name sounds familiar, it’s because it should. Fennegan has game experience at the college level. His one and only career start came against BYU as a member of Boise State in 2020. In that game, he went 15-for-26 with 182 yards, two touchdowns and an interception. Now, he is on BYU’s roster and looks to be the third guy and could push Conover for second-team reps.

The fact that a signal caller with the athletic traits Maiava-Peters possesses is near the bottom of the depth chart is a testament to the depth BYU has at such a pivotal position. Coming out of St. John’s College High School in Washington, DC, he was rated the No. 23 dual threat quarterback in the nation by 247Sports. He received offers from Michigan and Oregon among plenty of other Power 5 schools. Credit to him for sticking with the program when the transfer portal is a popular decision among athletes who are looking to start right away.

Coming out of San Clemente High School in California, Billoups originally chose Utah. He later transferred to BYU and worked on the scout team last season. He enters 2022 still just a red shirt freshman. He has plenty of athletic tools, as he rushed for over 1,000 yards as a junior quarterback in high school.

BYU also is adding former Yale signee Cole Hagen, but he recently told us that he is greyshirting and won’t join the team until January.