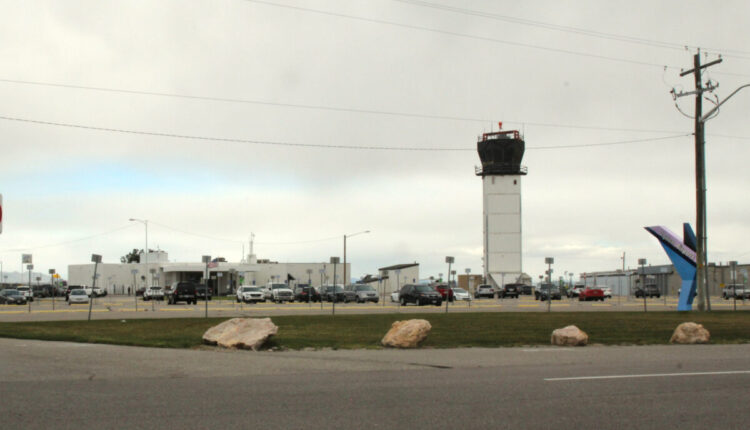 Jamie Lampros, Special to the Standard-Examiner

The Ogden-Hinckley Airport terminal is pictured Friday, May 20, 2022.

OGDEN — City officials are proposing a five-year program to pay for the planned demolition of old hangars at the Ogden-Hinckley Airport, part of a master plan to make the airport more attractive to commercial airlines and travelers and improve the city’s financial posture.

But the program comes against the backdrop of an ongoing federal lawsuit being pressed by hangar land lessees who say their hangar improvements are going to be taken from them unconstitutionally.

Brandon Cooper, Ogden’s economic development director, presented to the City Council on Tuesday during a work session an outline to spend $250,000 a year to demolish 35 hangars over the next two years and 52 more over the following three years.

The demolition program targets hangars that are too old, in too poor of a condition “or where the underlying land is needed for a higher / better use,” according to a planning document.

Council member Richard Hyer quizzed Cooper about how tenants are being handled as their leases expire, including whether they are able to keep occupancy by month-to-month rentals pending demolition.

“We are trying to balance the needs of tenants and the terms and conditions of the leases with the master plan,” Cooper said. “In strategic areas, we are absolutely going to take those down.”

The council took no action on the demolition budget plan, which is part of the council’s larger review of proposed city spending for future fiscal years.

Airport Manager Bryant Garrett said in an interview that five hangars — some 60 or more years old — have been demolished so far with existing funding. One demolition cost $90,000 because the hangar was connected to a building the airport wants to keep, he said.

Garrett said some hangars don’t hold aircraft. The master plan says that once a hangar has been on city land for more than 40 years, a tenant would be required to sign a facilities lease agreement in addition to the ground rent they’ve paid for years under the old leases. However, with some hangars, the city would not offer further leases and the city would take over or demolish the hangars.

“We’ve had people in hangars who no longer pilot and they are storing items from home, like boats, RVs, trailers,” Garrett said. “If you went to a mini storage place, you would pay an awful lot of money for that storage. So if you’re only paying ground rent here, it sounds like you’re getting a pretty good deal.”

Garrett said a key concern is that there’s only so much property available on airports where aircraft can have access to runways and taxiways.

The lessees’ lawsuit, being heard in US District Court in Salt Lake City, seeks an injunction to stop the city from ending long-running hangar leases. The Ogden Regional Airport Association alleges that the city’s plans will allow the city to illegally take improvements built into hangars after ground leases are not renewed.

Doug Lawton, of Ogden, a retired F-16 and commercial airline pilot, leases space for his private plane in a hangar at the airport. He is not one of the lawsuit plaintiffs but said he thinks the lessees have legitimate questions. He also wonders whether Ogden can attract robust commercial air business no matter how much officials improve facilities to accommodate it.

Regarding the lease situation, Lawton used the example of a homeowner buying a house on land they don’t own, with a friendly lease arrangement. “Then somewhere along the line they start changing in ways that allow them to take your house from you, with no remuneration,” he said.

Lawton described the airport’s hangar project as an eminent domain operation without proper compensation at fair market value. “The city’s getting to the point where they’re saying, ‘We’re going to take our land back and whatever’s on it.’ I suspect they have some perverted methodology where they can justify saying that. But the hangar owner is out all his money that he’s spent on the hangar.”

While Allegiant and Avelo airlines fly a few flights from the Ogden airport, Lawton said market forces are a headwind against further flight numbers and airlines, such as the proximity of abundant flights from the Salt Lake City airport.

He also questioned the appeal of Ogden for leisure travellers. Other than Snowbasin, “We got nothing,” Lawton said, that will “attract people in huge numbers” to fly into Ogden.

Garrett said the airport’s plans don’t rest solely on the desires for greater commercial air service. “A lot of people want to build new hangars here and we want to help accommodate them,” Garrett said. “Mostly corporate hangars with large aircraft, which are rather hard to come by now. I get 10 to 15 calls a week from people looking to acquire a hangar.”

He added, “We are trying to draw more aircraft, more pilots, more activity, to hopefully bring jobs and further economic impact to Ogden City and the surrounding communities.”

Watch: Going Beyond the Script of ‘The G Word’ and How Government Responds to Disease (Or Not)